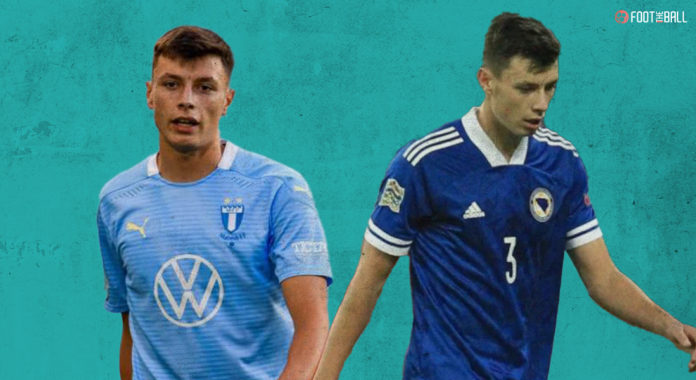 Kylian Mbappe is undoubtedly one of the most fearsome and adept goal scorers in world football currently. He has been breaking all sorts of records for his age and is on course to set many more. So it takes something really special in order to keep him quiet, that too over the whole 90 minutes. One player who has been able to do that is someone not many have really heard of, and with good reason. To say that Sheffield United have landed a major coup by signing Anel Ahmedhodzic is a huge understatement.

Anel Ahmedhodzic, a 22-year-old centre-back for Malmo FF in the Swedish top-flight, earned plaudits from onlookers after a stellar performance for Bosnia and Herzegovina against France back in April 2021. He spent the last season at Bordeaux, on loan from Malmo. Ahmedhodzic had clearly outgrown the Swedish league.

Now, he is set for a surprise move to Sheffield United in the English second division. Nobody will be surprised if Anel Ahmedhodzic is already on the move after a sterling first year next season for Sheffield United.

Everybody agrees on regarding Ahmedhodzic is how calm and composed he remains regardless of the situation. He is an expert in timing tackles and is known for making challenges with very few fouls given away. Ahmedhodzic was adjudged the Best Defender and Best Young Player of 2020 with Malmo and the reasons are clear to see.

Across Europe, he was the closest under-23 comparison with Liverpool rock Virgil Van Dijk. His 192cm frame and long legs enable him to put his challenges across in a fair but successful manner. These qualities are reflected in his stats. Bordeaux had a dismal season which ended in relegation. However,  Anel Ahmedhodzic was one of the few players who finished the season with his reputation intact.

His stats show a profile of an ideal modern defender. Anel Ahmedhodzic finished in the 88th percentile of progressive passes and 94th percentile of shot-creating actions. That means Ahmedhodzic is highly adept at carrying the ball upfield, a necessity for the modern defender. Furthermore, this ball-carrying ability doesn’t come at the expense of his defensive duties. Although Bordeaux conceded a huge 91 goals in the league last season, Ahmedhodzic still managed to finish in 76th and 71st percentile of tackles and interceptions respectively.

Ahmedhodzic has also become a regular for the Bosnia and Herzegovina national team, already racking up 18 caps after making his debut in 2020.

What's the most satisfying thing to watch in football? 😍@NFSBiH | #WCQ pic.twitter.com/heOQ11xZ6r

As mentioned above, he already had a stellar showing against France, but also shone brightly in the other matches too, notably holding Les Bleus to a goalless draw in the reverse fixture. All of this points to a quality player slowly getting the recognition he deserves.

Ahmedhodzic’s reputation has taken a hit due to Bordeaux’s dismal last season in the league. However, he passed the eye test last season as well. Sheffield United have done a great job, as Ahmedhodzic can be considered a stressed asset. His value will never be as low as it is now, while his eye-watering potential remains the same.

Another sign of surety in what Ahmedhodzic has to offer and how his potential is yet to be truly captured comes in the form of how highly he is being talked about in the annals of Football Manager. Several reports have earmarked him as a bargain buy who can really elevate a mid-table club’s defence on the cheap before being sold for a huge sum.

What next for Anel Ahmedhodzic?

Ahmedhodzic was once targeted by the likes of Atalanta and Napoli. Now, he is set to ply his trade at Sheffield United in the English second division. A single move can change the career trajectory forever. It looks to have done the same for Ahmedhodzic. However, it doesn’t have to be forever.

The potential is still there. Moreover, Anel Ahmedhodzic’s style of play is such that the Championship should suit him well. His physically imposing frame will take care of the biggest hurdle foreign buys face in the second division- the overwhelming physicality of the opposition.

This transfer could be a win-win for both parties. Sheffield United get a stressed asset with huge potential in Anel Ahmedhodzic. Meanwhile, the player can get a fresh start to a career now blighted by being part of a defence that conceded 91 league goals. If Ahmedhodzic manages to recapture the form that once made him a wonderkid, it will again be a win-win for both. Sheffield will be able to turn a huge profit on a player they have brought for just £3m plus add-ons, while Ahmedhodic will get his career back on track. Exciting signing for Sheffield United fans, just ask Football Manager players!