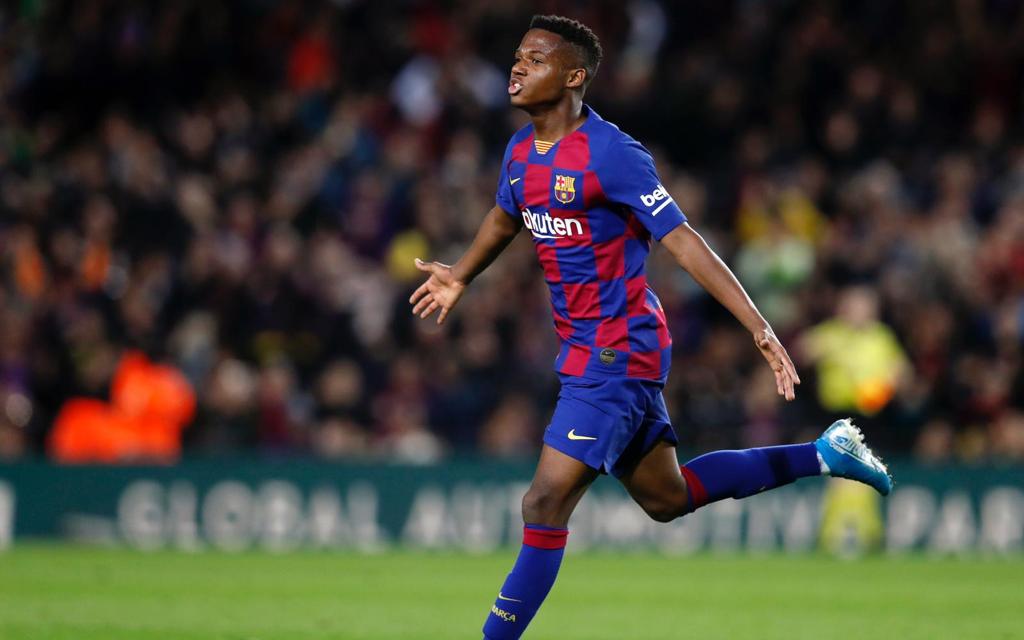 A superb talent discovered and cultivated by his boyhood club. His pace and finesse on the ball is a nightmare for all defenders. To top it all, the form that this teenager has been in, lately, is beyond imagination. Yes, we’re talking about none other than Barcelona’s Super Youngster: Ansu Fati.

For anyone who still doesn’t recall, Fati is the youngest player ever to have scored in the La Liga, Champion’s League as well as for the Spanish national team.

Since his debut in 2019, he has been turning heads.

Even before reaching the age of 17 years, Fati has already scored more goals than Lionel Messi had at his age.

FootTheBall brings before you, the story of this budding hero and a look at what the future might hold for him.

He moved to Spain at the age of six years after his father was finally able to settle down in Seville. Initially playing for free for a neighborhood club, Fati turned heads soon and was called up to the diamond mine for polishing in 2012- La Masia.

“Ansu was one of the youngest players ever to have entered La Masia. From the day that he arrived he was different, the type of player who invents football.”

In no time, he was a favourite. He is also among the few players who had been promoted directly to the first team, without being included in the reserves. He went on to make his La Liga debut in August 2019 against Real Betis at the age of just16 years and 298 days. Super Youngster: Ansu Fati indeed!

He is the most prolific La Masia graduate of the new generation and has proved that on all stages. In no time, he broke several records for Barcelona becoming the youngest player to score for the team in La Liga as well as the Champion’s League. This however is not the end. He is also the youngest ever goalscorer for Spain. He made his debut in September 2020 and scored in Spain’s 4-0 victory of Ukraine.

Fati now has become an integral part of the first team. He plays on the left in the attacking trio alongside Lionel Messi and Antoine Greizmann. His role under Ronald Koeman is indispensable in attacking. He has also managed to become a fan-favourite, all in an incredibly short span of time.

The past few seasons for Barcelona have all been below par. Their performance in the league as well as style of play had been degrading by the day. Champion’s League success was far-fetched. Adding to the woes was repeated change of managers and flop player transfers.

Barcelona wasted hundreds of millions in recent years. Poor transfer strategy spending huge sums on aging players with no resale value. A new stadium is in the pipeline and that won’t be cheap. Huge rebuild required both on and off the pitch.

Ousmane Dembele, Phillipe Coutinho, and Antione Greizmann were among the big names the club had signed to improve the attack. Their performance, however, was far from impressive.

Ansu Fati, however, managed to arrive on the scene right on time.

In Ansu Fati, Barcelona found the perfect attacker who could dribble, shoot, and combine with other players. The youngster’s sense of positioning and gameplay is commendable and makes the opposition fear him.

Having played in the La Masia, the basics of the game were well ingrained in the youngster. He, thus, adapted to the first team in no time.

He is a regular player in the starting XI for the team now and plays a vital role in attacking from the left. He has finally helped fill the void in Barca’s attack that has existed ever since Neymar Jr left the club.

His presence alongside Lionel Messi contributes a great deal in improving the attack, for he is absolutely reliable in terms of scoring and creating chances. Under Koeman especially, he has finally helped Barcelona recover from the Messidependencia i.e. the over-dependence on Messi.

This for Barcelona fans is a great news all-in-all, considering that Messi’s reign at the club could be nearing the end.

As we explain why Ansu Fati is Barcelona’s best option available, it is inevitable we evaluate relatively.

As Neymar Jr left the club, there had been several players who had been brought in to accompany Messi and Suarez in attacking.

These include Ousmane Dembele, Phillippe Coutinho, and Antoine Greizmann.

Dembele was signed from Dortmund for a fee of €105 million. Being a youngster and a player ahead of his prime, he was expected to contribute a lot. The expectations however turned out otherwise. His inability to settle at the club lead to disciplinary issues. The problems were further aggravated by repeated injuries. Overall, despite being at the club for three years, he is far from settled and there’s barely any hope for the same now.

Greizmann, on the contrary, transferred from Atletico, another La Liga team. He was, thus, settled in the league, but has not been as impactful. Playing on the flank, rather than his usual position at the center, his contribution to the game is little and far below what was expected from the world cup winner.

Phillippe Coutinho, lastly, has been a unique case. Arriving in the January transfer window of 2018, Coutinho’s initial impact on the game was great. This however degraded over time. As the next season began, the Brazilian looked out of place and was soon dropped out of the team by Ernesto Valverde.

As we list down the transfer woes, we can definitely comment that Barcelona have found the solution in Ansu Fati. He is young and capable. Well settled with the club and already well accustomed to the Spanish game. His consistency and discipline further make him a favourite among the teammates and the manager, thus making him the ‘Super Youngster: Ansu Fati’.

“We need to keep calm, but we know what kind of facets he’s got. They’re tremendous. We need to let him play his football.”

Sergio Busquets on Ansu Fati in the post match interview after his brace against Villareal in La Liga.

Fati has once again highlighted the importance of the La Masia for Barcelona and their need to develop it further. Since Barcelona’s history, players belonging to the youth academy have proven to give a lot more. Be it Andres Iniesta, Xavi, Carles Puyol, Lionel Messi, Gerard Pique, or hundreds of other important names etched in the club’s history.

The current batch of La Masia consists not just of Ansu Fati, but also several other exciting players including Riqui Puig, Carles Alena, and Ronald Araujo.

While Ansu Fati’s importance and contribution to the team has been highlighted already, there is still a long way to go. His reign has just begun and he is expected to make an even greater mark for FC Barcelona. With the same intentions, he recently extended his contract with the club until 2024 and now has a release clause of whopping €400 million for the Super Youngster: Ansu fati

Having scored three goals in just three league games of the new season, Fati’s role under Koeman cannot be overlooked.

As Koeman looks at a more balanced and dominant Barcelona team, at the heart of it has been the well-functioning attack with Fati and Messi.

Koeman shall surely intend to continue this and further hone the lethal attacker to give more to the game. With his speed, strength, and precision, he has now become irreplaceable. He has finally helped the club lift the load off Lionel Messi’s shoulder and share attacking responsibilities.

As the season continues, one cannot predict but hope for a lot more from the youngster. He shall look to continue his prolific run with club and country and become Barcelona’s unsung hero for the season.

While the stadiums remain empty, the fans sure are applauding his efforts and cannot wait to watch him live again. He is a superstar on the rise – the saviour Barcelona have been looking for. 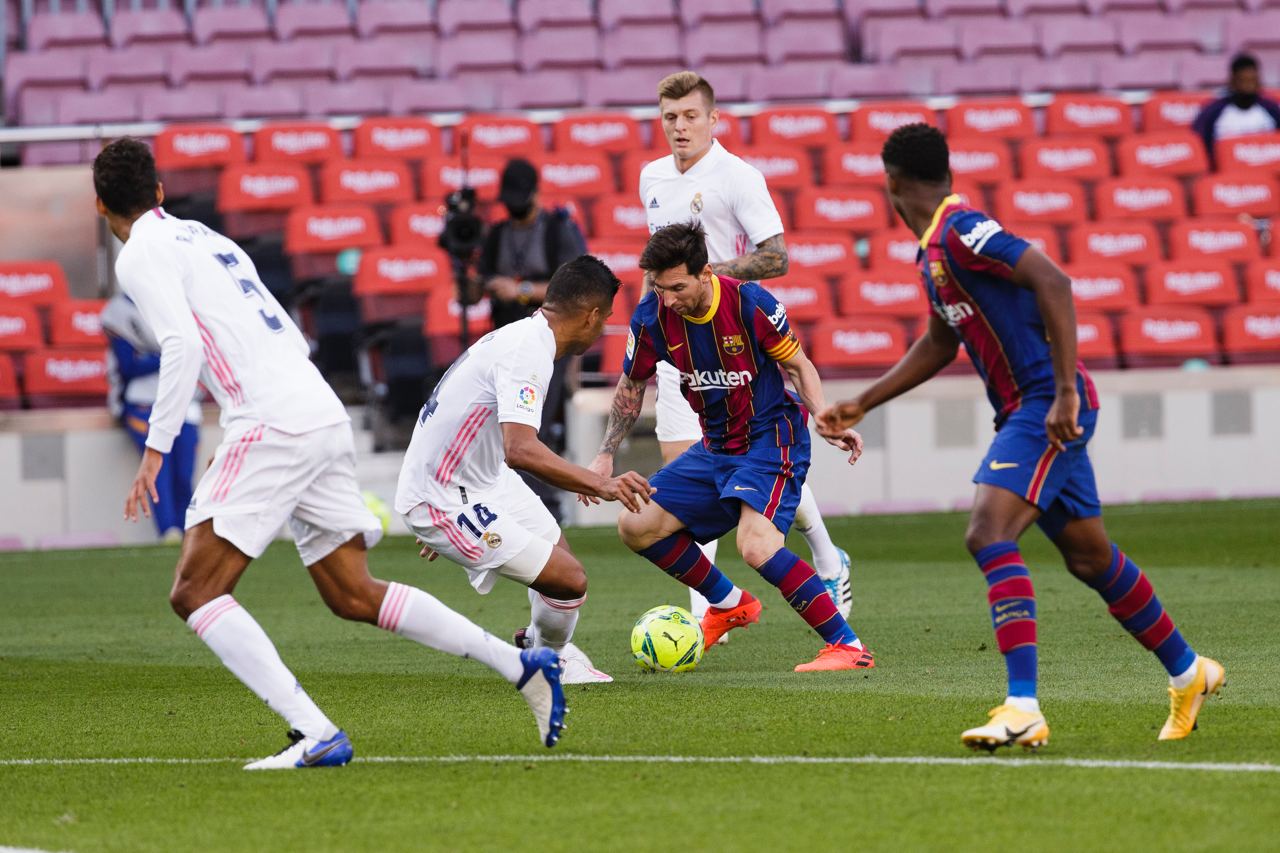