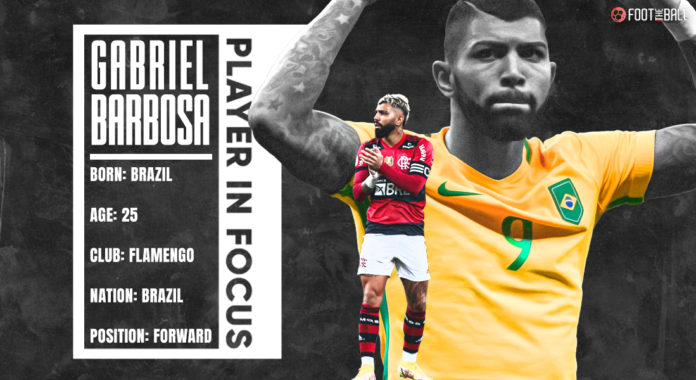 Gabriel Barbosa, the 23-year-old Brazilian striker, is in demand again after a few prolific seasons with Flamengo. Rumours of him joining a European club are increasing every passing day. Wolves, West Ham United and Manchester United have all shown some kind of interest in him over the course of his Flamengo career.

The Trequartista role is diminishing in modern-day football but Gabigol might just have other plans!

Born and raised in the state of Sao Paulo, Barbosa’s talent was first noticed at eight years of age when, playing futsal for Sao Paulo, he scored all six of his team’s goals in a 6-1 win against Santos. From there, he was quickly integrated into the Santos youth system, where he went on to score more than 600 goals and became known to all at the club as Gabigol (for quite obvious reasons)!

A 16-year-old Gabriel Barbosa made his first-team debut for Santos against none other than Flamengo in 2013. The Brazilian media often touted Barbosa as ‘the next Neymar’, so it seemed very fitting that his Santos debut was actually Neymar’s last game for the club before his illustrious move to Barcelona – a passing of the baton, if you may. In fact, in a similar fashion, and after showing early signs of the exciting and skilful attacking play he is now renowned for, he sealed a move to Italian giants Internazionale in 2016, for a fee of just over £26 million.

All this transfer talk is fair, with Gabigol in unbelievable form since joining Flamengo, and showcasing his talent over why Inter Milan had paid a hefty fee for him in 2015. He has been in incredible form, successfully fulfilling the role of the main goalscorer of the Copa Libertadores winners. Even more than that, he has shown his leadership qualities and willpower in his spell in Flamengo.

A better way to assess Barbosa’s metrics would be xOVA: What’s that though?

Winning 4 major trophies with Flamengo and being in such an unstoppable form revived the hopes of him playing and succeeding in a big club in Europe. The first try in Italy with Inter wasn’t that great, but there is a strong belief that the second time will be a success. FootTheBall takes a look into the main qualities of a Brazilian striker, his role in Flamengo’s tactics and whether he will be able to replicate his Flamengo success in Europe.

How good is Gabigol?

Gabriel Barbosa, affectionately known as ‘Gabigol‘ in Brazil, has led the line for Flamengo over the past 4 years and is already the fifth highest goalscorer in the club’s history. Having initially joined on loan from Inter for the 2019 season and notching an astonishing 43 goals in all competitions, it’s no wonder the Brazilian champions made his move permanent; in doing so he became the most expensive player in Brazilian football history, with a price tag believed to be somewhere in the region of £15 million.

Gabigol has been the leading goalscorer in Brazil, netting a little less than a goal per game. Despite playing such an important and interesting role in the Flamengo team in the build-up, his main duty on the pitch remains netting as many goals as possible. So far in his spell in Flamengo, he managed to fulfil his task.

What is the reason he failed to have such an amazing display in Inter Milan? One of the reasons for that is the lack of shots during that period. He is a striker whose consistency in goalscoring very much depends on shot volume. However, he can’t consistently score goals from rare moments in a game. In Inter in the 2016/17 season, he had nine appearances as a sub with 10 shots.

Also read: What are Passing networks in football>

Despite his great assistance in Flamengo’s defensive matters, his discipline on the pitch is not great, he has been booked with 18 yellow and he was sent off the pitch 2 times. Most yellows are not for fouls or dirty play, but for extreme celebrations. He has created a cult with his celebrations and goals, but in a big club, this kind of behaviour becomes risky and totally unnecessary.

Flamengo have been a dominant force in the Brazilian league for quite a few seasons now, dominating basically every team from a tactical standpoint and even finished on their highest ever 90 points tally, and one of the big reasons for the team’s success was their relentless work ethic. Their average PPDA has been 7.9 since Barbosa’s time there. Gabigol was also taking part in the joint task, pressing the opposition. Statistically, he has made 1.4 recoveries per game with 78% of them being in the opposition half. It shows that he is making great defensive contributions from a striker position.

Moreover, he makes 0.43 interceptions per game, not cutting off passes that much, but still doing the job. He is not restricted to his position even when the team is defending, which allows him to make decisions on his own, occupying the right spaces in the defence.

In terms of his passing accuracy, he completes 80% of his passes, which is very good for a striker, and again this proves my thesis about his great link-up ability.

Despite his amazing statistical record in his last 4 seasons in Flamengo, it can’t be said that he is a pure striker. When playing for Santos he was used as a winger too, causing comparisons with Neymar. Also, he was often used as a second striker and he had the experience of playing in that role for Flamengo too.

He is a left-footed player, and during the game, he tends to drift wide to both flanks(but primarily to the left). However, he often drops deep into midfield and occupies different areas on the pitch, very similar to Roberto Firmino’s movement in Liverpool. Getting the ball from the defenders and linking up the play between the team is one of Gabigol’s main jobs in the team.

Usually, Gabigol tries to position near the touchline, from where he can either continue pushing through the centre or attack down the flank. As previously mentioned, Gabigol also drops deep into the middle to link up the play, create overloads, destroy markers and wreak havoc on the opposition’s defensive set-up. He sometimes picks very unusual positions for a striker.

Gabriel Barbosa’s main strength is that he somehow helps create overloads on the flanks. But what are those?

West Ham United have allegedly been offered the chance to sign talented Flamengo striker Gabriel Barbosa this summer. According to multiple reports, the Hammers will be given a crack at signing the Brazilian hitman in the summer transfer window.

West Ham manager David Moyes desperately needs to bolster his centre-forward ranks at the London Stadium before the start of the new season. Gabriel Barbosa is someone who has been extensively linked with a move to the Hammers over the past few years. The Brazilian is a proven goalscorer and that is exactly what West Ham need at the moment.

However, there have been accusations that the striker isn’t the most hard-working and committed to training in the past. Former Inter boss Frank de Boer didn’t hold back when discussing Gabigol’s time at the San Siro, as quoted by The Mirror:

“Inter bought him for €35 million. I didn’t know much about him, but they told me he was a fantastic player. He thought he could do everything while standing still, playing indoor football. They called him Gabigol, but we called him ‘Gabi-no-gol.’ He joined us with two personal social media editors and a bodyguard but didn’t do anything.”

Manchester United have not contacted Flamengo over a possible move for Brazilian striker Gabriel Barbosa despite reports that were circulating online following the reports of a possible Cristiano Ronaldo departure.

United will have to look for replacements should Ronaldo leave Old Trafford this summer, with a number of European giants already monitoring the situation with Ronaldo at United.  United will be linked with a number of strikers with the news of a possible Ronaldo departure this summer and Barbosa seems to be the first name out of the hat.

After his failure to establish himself in Europe, his return to South America has been sensational. But can he repeat his current success in the European top leagues? The main issue that Gabigol fixed since returning from Europe was his confidence. He became a hero, and his goals and overall impact on the team lifted his spirits tremendously.

He was already getting offers from English clubs in 2019. He has got everything to be a great striker, and his first spell in Europe may be the turning point in his career for good. Gabigol is still only 25 years old, and he has his whole career ahead of him to prove his worth.