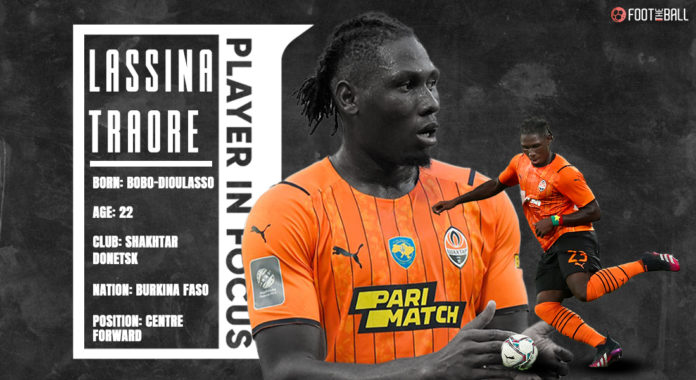 One of the significant stories of the winter transfer window has been the transfer of Shakhtar Donetsk star winger Mykhaylo Mudryk. English league leaders Arsenal have been chasing Mudryk for the better part of the previous two transfer windows. However, among all this news about Mudryk, another player at Shakhtar is bound to move to the big club. Centre-forward Lassina Traore is among the top African strikers to come out in recent times.

Hailing from Burkina Faso, Lassina Traore is a talented striker who made waves in the Eredivisie before switching to the Ukrainian league. If Mudryk leaves, then Traore will become even more instrumental for Shakhtar. And if he manages to keep up his performances, then next time, the big club will be coming from him.

Shakhtar have always been brilliant at signing talented players at low fees and then selling them for an exorbitant amount. Lassina Traore falls precisely in that category and is one top watch-out for.

So, who is Lassina Traore, and how good is he?

How good is Lassina Traore?

Lassina Traore was born in Bobo Dioulasso, Burkina Faso, on January 12, 2001. Born in a family where several of his family members were already involved in sports, Traore was provided with an environment that encouraged playing sports at a young age. His mother was a professional footballer and captain of the Burkina Faso women’s national football team. His cousin Bertrand Traore plays for İstanbul Basaksehir in the Turkish Super League, on loan from Premier League club Aston Villa.

Traore started playing football at the school level till 11 when he joined the youth academy of Rahimo, a club which competes in the Burkinabe Premier League. There he would play through several age groups teams at the club.

At 16, he was scouted by Ajax. However, since he was under 18, he could not be transferred to the Netherlands. As a result, the player was sent to Ajax Cape Town, their satellite club. Traore would finish as the top scorer for the reserve team.

As soon as he turned 18, he signed his first official contract and joined Ajax in 2019. He played for the reserves, scored eight goals, and provided three assists in 14 matches.

However, his most significant moments came in the Champions League. Lassina Traore was named in the lineup for the second leg of Ajax’s semi-final against Tottenham Hotspur. His debut in the Eredivisie would come in a 4-1 win over FC Utrecht.

He would become an integral part of the senior team for the next two seasons, where his incredible performances caught the eyes of Shakhtar, who signed him for €10 million in the summer of 2021.

His stock started to rise in the second season at Ajax. as he would score 13 goals and provide seven assists for the reserves. He would also play nine matches for the senior team scoring two goals and providing two assists.

However, it was the 2020-21 season when he showed the world how high his ceiling was. Playing just 12 matches, Traore scored seven goals and provided six assists helping Ajax win the Eredivisie. He would also open his scoring in the Champions League against Atalanta.

Despite changing leagues after joining Shakhtar, Traore’s output went up a notch as he scored six goals in seven games. Then, however, a knee injury ended his season.

He returned from injury this season, but coach Igor Jovicevic has used him sporadically, playing him only 495 minutes, scoring two goals and providing three assists giving him a goal involvement of one per 90 minutes.

What makes Lassin Traore special is his high accuracy in scoring goals or creating them; as mentioned earlier, even in the current season, where he has been played sporadically, Traore has still managed to maintain his high output. This makes him a brilliant addition to any team who will have a player who, even on his worst day, can be a menace to the opposition.

In recent years he has also refined his game to add poaching skills to his game. While Traore has always been a gifted dribbler, which, combined with his pace, made him a top striker. However, what was lacking in his game, even at Ajax, was his lack of intelligent runs, which would place him at the right place at the right time.

The addition of this skill has made him a complete forward who uses the inside channel, especially on the left to take the ball towards goals and, at the same time, uses intelligent runs to get in a good position inside the box while his teammates take care of delivering the perfect ball.

From a skill point of view, he has almost developed to his potential. Now, he needs the physical transformation and mental toughness to compete in the big leagues.

It is not a question of when and not if he will join a big club. Traore is a player that is too talented for the Ukrainian League, and sooner or later, clubs from the top five leagues will come from him. Even in his current form, Traore can start for a mid-table Premier League team, and if he keeps up his consistency, he will only get better.

According to several sources, West Ham United are interested in him. Still, Shakhtar doesn’t want to let Mudryk and Tarore leave in a single window without finding a perfect replacement. However, one brilliant season in Ukraine will invite bids from clubs that will test Shakhtar’s resolve.

For now, even if Mudryk leaves, Traore will ensure that the team has a player who could take his game to the next level.