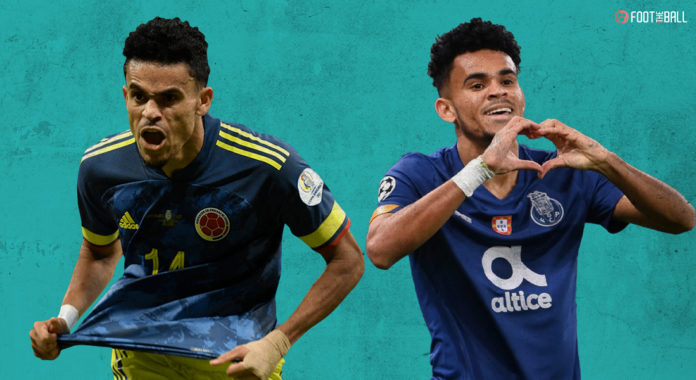 With the transfer window in its final days, two Premier League clubs that have been dormant till now have woken up with force. Spurs and Liverpool are fighting head-on for the signature of Colombian attacker Luis Diaz, currently with Porto. The London club were reportedly ahead in the past few days and after missing out on Adama Traore, looked set to get their next target.

Diaz is currently in South America with Colombia – Liverpool want to be plan and be prepared for potential medical there. pic.twitter.com/PV9v76xWLE

However, the Reds, who were linked with Diaz last year as well and looked for a summer move this year, were spooked by Spurs’ interest and jumped into the bandwagon quickly. A fee of €40m guaranteed plus €25m bonuses add-on looks to have sealed the deal for Liverpool who add another scoring wide man to their ranks. So who is Luis Diaz, and why has he been followed so intensely over the past couple of years?

Diaz joined Porto in the summer of 2019, and had a solid debut season with eight goals and two assists in all competitions. Though right-footed, he plays down the left flank and of course, cuts inside at every opportunity to deliver crosses and take shots. Furthermore, the Colombian is extremely quick and able to carry the ball over long distances in order to facilitate attacks.

His six goals in the league that season came from just 20 shots-on-target (SoT) with 2.54 shots/90. Diaz’s second season also saw similar returns with 11 goal contributions in the league (six goals, five assists) but his accuracy was off with just 12 SoT. However, the end of the 2020-21 season ushered in Copa America where Diaz really dazzled for everyone to sit up and take notice. Colombia finished third with the 25-year-old being the star man.

All of Luis Diaz’s goals at Copa America

Diaz netted four goals to finish as joint top-scorer, single-handedly overseeing the win against Peru in the Bronze medal match. His two goals, the second being a spectacular effort from distance in the final minute of injury time, cemented his status as the breakout star. Diaz also scored a bicycle kick against Brazil in the group stage, a goal that was a contender for the FIFA Puskas Award and gave his nation the lead against Argentina in the semis too.

Diaz also had the best minutes-per-goal ratio with a goal every 96 minutes and 5.2 successful dribbles per match (second-most after Neymar). Having had a tournament to remember, he has picked up right from where he left and has been tearing it up in Portugal.

A PERFECT FIT FOR EITHER CLUB

There is little surprise as to why both Spurs and Liverpool chased after Diaz. Antonio Conte loves wide attackers who can score and have a great work rate. Having missed out on Traore, and with the squad definitely in need of upgrades, Diaz was a worthwhile target. For Liverpool, meanwhile, they already have a wealth of experience in this regard. Jurgen Klopp has made Sadio Mane and Mo Salah two of the most premier wide forwards in football, reaping the rewards over the years.

Luis Diaz’s goal against City in the Champions League pic.twitter.com/p7MchEIuqh

Diaz for his part has kept everyone at the edge of their seats with scorching performances. 14 goals and four assists in 18 league games, outperforming his xG of 12.3 with 39 key passes (second-most) and 46 dribbles (third-most). Moreover, he has been taking shots at an increasing rate with 3.74/90 (second-most) and 1.57 SoT/90. Diaz has also scored in the Champions League against AC Milan in both fixtures and is quickly becoming a man for the big occasions. He has the facets to succeed immediately in his new surroundings which will be a major boon for the Reds who are in pole position to land him in order to start off their long-term plans.

Something even more exciting about signing a South American forward 🇨🇴 pic.twitter.com/NqHDj8286q

Mo Salah, despite being one of the best in the world in his position, has been mired in a stalemate with the club over a contract extension. Securing Diaz will give the club leverage in talks with the Egyptian along with sending out a strong message to their rivals that the title race is far from over.

CAN HE KEEP IT UP?

The big question whenever a player makes a big-money move from a different country. Diaz plays the same exact position as Mane, with the Senegalese being in good scoring touch too (eight goals). Klopp is known to ease newcomers into the side slowly over time like he did with Diogo Jota, who has blossomed in the setup. No doubt his initial playing time will be a topic of discussion during the final stages of the negotiations, but Diaz does look like the real deal.

This combination of attacking output, ball retention, skill in 1v1s on the ball, and finishing doesn't come along too often. Can't really tackle but still defends well for a LW. pic.twitter.com/uT8vuTsKdt

He has explosive energy around him, runs and presses tirelessly which is a must in Klopp’s system along with being a very reliable finisher. They have coped well with the absences of their African stars so far, but extra ammunition never harmed anyone especially in the Premier League where uncertainty is abound every year.