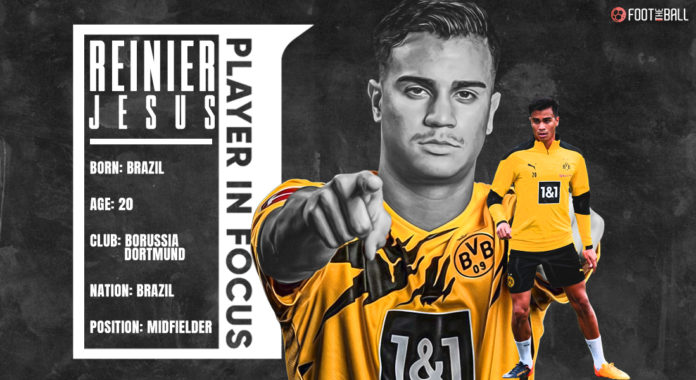 Real Madrid’s league and European double in 2021-22 had a lot of important characters. Two of the most important stars among them were Brazilian youngsters Rodrygo Goes and Vinicius Junior.

Both had been signed by Los Blancos from their native Brazil and had played crucial roles as their development continues. It is safe to say they are now part and parcel of the first team. However, there is yet another young Brazilian attacking player who has not made the cut so far.

Reinier Jesus, signed from Flamengo in January 2020 has not made his senior debut in over two years. He has had to settle for a place with the reserves and spent the last two seasons on loan at Borussia Dortmund. With another loan spell looming on the horizon, Reinier’s time to impress at Santiago Bernabeu is getting shorter.

The top facts you have to know about Aurelien Tchouameni, the next great hope of Madrid’s midfield

Moreover, there is a very real chance that Madrid move on from Reinier Jesus soon. So, what happened to the former Brazil U17 captain, and can he turn his fortunes around?

The main problem for Reinier Jesus establishing himself at Real Madrid was the competition. The 14-time Champions League winners are stacked in every department so breaking into the first team was never easy. Furthermore, the team’s formation and existing players complicated the situation.

Reinier Jesus is an attacking midfielder who likes to operate behind the striker(s). Madrid operate with a 4-3-3, meaning there’s no out-and-out number 10. Moreover, the number 10 for the club over the past many years has been Luka Modric. The Croatian is an irrepressible figure who performs at the very peak of his powers and is one of the best in his position.

Modric has been the mainstay of Madrid’s midfield, alongside his partner-in-crime Toni Kroos, a zen master at passing. The two of them have hardly allowed anyone to replace them, and Reinier Jesus’ prospects were doomed. However, that was not the only issue.

His development with the Castilla side was slow, meaning players signed after him were getting chances. Federico Valverde has established himself as the go-to player on the bench.

In the past, it was Isco and Dani Ceballos as well who have played ahead of Reinier. Therefore, there were few options in front of Reinier other than to make a loan move away in the summer of 2020.

Reinier Jesus could have asked for a better club to spend his formative years with. Dortmund had a history of nurturing young talent and making them superstars. They took the 18-year-old on, but the marriage was not a great one.

Once again, Reinier Jesus struggled to establish himself as a regular starter. He made only 14 Bundesliga appearances (one start), scoring once and assisting once. That kind of return would not have helped him anywhere, much less at Dortmund.

Dortmund have signed Karim Adeyemi to offset the departure of Erling Haaland. It is not a bad acquisition by any means as the numbers show

Reinier Jesus was soon sidelined in favour of Gio Reyna, with Marco Reus also firing when fit. Though he did manage to win the DFB-Pokal, things would not get better in 2021-22. Reinier Jesus went the entire season without finding the net.

He made 13 appearances in the league, with only a single start. It was clear that this was a player struggling to find his feet amongst the European elite.

Reinier had been trying his utmost, but the requirements of playing in the European top-flight were bogging him down. He returned to Madrid in 2022 but it was evident that another loan spell was in the offing.

Not everything was doom and gloom for Reinier Jesus in 2021-22. He had a passing completion rate of above 80% (FBref) and a duel success ratio of 52% (Soccerment). Moreover, he completed all five of his dribbles, though could only win one-fourth of his aerial duels.

Madrid have the successor to Luka Modric in Lovro Majer, who is the next great midfielder from Croatia

Madrid are in the process of finding another club for him, with Benfica having emerged as the frontrunners. The experience in Portugal will certainly shape Reinier Jesus into a more sturdy player who has to take on responsibility. Furthermore, Benfica are a powerhouse in the league and Reinier could become a mainstay.

Therefore, it is an enticing prospect for the 20-year-old who still awaits his senior debut for his parent club. That could become a reality sooner than later if Renier fulfills his immense promise.

However, the reverse could also become true if he continues to underperform. The 2022-23 season will be extremely crucial for his playing career.