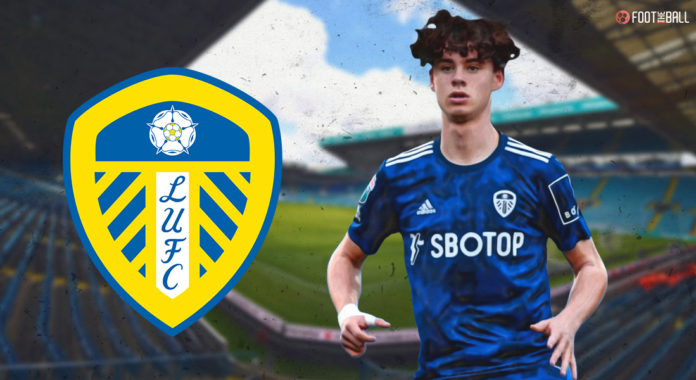 May 22, 2021. Brentford Community Stadium. Brentford’s Josh Dasilva cleared a corner from Raphinha at the near post. However, the ball fell to Jack Harrison outside the box, who unleashed a powerful low shot past David Raya.

This was no ordinary goal as it guaranteed that Leeds United would stay in the Premier League. Their future was safe. Not just in terms of survival but also in player development. Because on that day, on Leeds bench was a player who is part of the club’s future, a 16-year-old named Archie Gray.

The teenager’s name has been on the lips of every Leeds fan. In a season where they have seen massive defeats, and underwhelming performances, Marco Bielsa’s sacking, and the rise of a player like Gray was positive news.

While the youngster has still to take to the pitch in a Premier League match, the signs are promising for the youngster in the next season.

So, who is The Peacocks‘ new star boy?

Who is Archie Gray?

The player has spent his entire career at Leeds and has made rapid strides through the youth level. After his promotion to the under-23s, Gray made no delay in introducing himself by becoming the youngest goalscorer in the Premier League-2. And the goal was itself a goal of beauty as he scored from 35-yard with a Beckham-esque finish.

These performances were noticed by Bielsa, who promoted him to the senior side in December against Arsenal. With this, he became the youngest-ever player to feature in the Premier League. However, he did not make any appearances throughout the season. Expect that to change next season.

– Cresswell is levels above
– Archie Gray is well beyond his years
– Summerville is a wizard
– Joseph gives off massive Rodrigo vibes
– Bate could do it in the PL
– Leeds were good for at least a point
– 21,000+ for U23’s is absolutely phenomenal

And that’s that. #LUFC

It is no secret that Gray is the golden boy for the club’s future. His rise will also be helped now that Leeds are in the Premier League. This will ensure he gets a chance to play among the world’s best.

Leeds will indeed play him more in the under-23s level with the occasional appearance in a Premier League match to boost his confidence and help in his development. A significant downside for him next season would be that Leeds under-23 have been relegated after finishing second-last in the Premier League-2. The Peacocks also have a rich history and will need homegrown players like Gray if they want to re-establish themselves among the top teams in England, and possibly Europe.

We still do not have concrete stats for the player due to the limited minutes he has played. However, he has scored three goals and provided two assists at the under-18 and under-23 levels. However, bossing the U23s level at the age of 16 shows that Archie Gray is destined for superstardom.

He also has one assist in the EFL Cup against Tranmere Rovers. However, with his talent and skill, he will likely post big numbers in the future.

Style and skills of play

His assists for Amari Miller in the EFL Cup looked like a work of a seasoned footballer, which shows that he is mature beyond his years.

Another interesting fact is that Gray has spent almost a decade with Brazilian Soccer Schools Harrogate, learning futsal twice a week. It has helped him in improving his ball control, dribbling and passing.

Apart from his brilliant talent and skill, there is another thing that has got people excited. Archie Gray is the great-nephew of Leeds United legend Eddie Gray. The older Gray played his entire career at Leeds as a winger. He made 577 appearances, scoring 68 goals and winning two league titles. Eddie won a total of six trophies with Leeds. He also managed the club in the 2003-04 season, where he could not save the club from being relegated.

In addition, Archie’s father Andy played for the club as a forward and is now a coach in Leeds’ youth system. His grandfather Frank was a defender and played over 200 times for Leeds.

This means the kid already has the club’s DNA and could provide Leeds with the next star from the Gray family.

Unless something dramatic happens, we can safely assume that Archie Gray is going nowhere. Archie Gray is a Leeds United kid through and through and also has family members as a part of the coaching staff at the club. So, he has a better environment to prosper and is also close to his family.

In addition, he is still 16, which means he has many flaws in his game that he will need to correct. There is no environment better for him to do so than under the adoring eyes of Leeds fans. If he does that, then maybe the fans at Elland Road will have a new hero to cheer which they need after a difficult season.