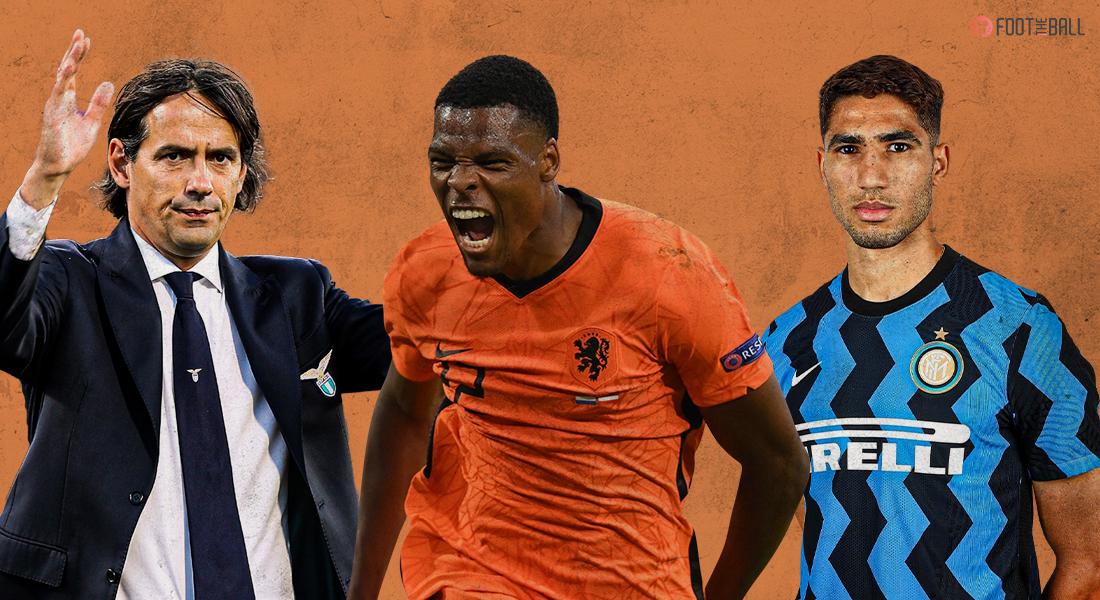 If you are an Inter Milan fan, then rejoice. After all the troubles in the transfer window, they are about to strain their pockets and sign a player. According to the transfer pundit Fabrizio Romano, Inter, the Sere-A champions are about to sign the Netherlands international Denzel Dumfries. It is understood that a verbal agreement has been agreed with PSV and the club are looking forward to closing the deal.

Personal terms agreed too. Inter are planning for medical in the next few days in order to complete the move. Everton are out of the race. #EFC

Denzel Dumfries had a wonderful Euro 2020 with the Oranje. He played a key role in the Dutch team reaching the round of 16. The PSV Eindhoven full-back was powerless in the first knockout fixture as the Czech Republic shocked the Netherlands. Nevertheless, the European stage proved as a grand audition for Dumfries’ talents as it secured him a move to one of Europe’s elite clubs in Inter.

Inter Milan won the scudetto after 10 years in some style. The Nerazzurri under Antonio Conte were consistent and the swagger of the champions to dethrone Juventus as the kings of Italy. Instead of building on their success, they had to succumb to pandemic woes. A full-blown financial crisis meant differences of opinion arose between the manager and the board. Antonio Conte simply walked away from the project. Lazio manager Simone Inzaghi was roped in to defend the league title. With player sales in full swing, adding a player like Dumfries would surely boost their squad.

Dumfries was born and brought up in the second largest city of the Netherlands, Rotterdam. He has his roots in Aruba, a tiny Caribbean nation and is named after the popular Hollywood actor Denzel Washington. Dumfries joined the local amateur side Barendrecht as a teenager to groom his footballing skills. He is blessed with natural pace and good physicality that helped him progress through ranks quickly.

He represented his local Sparta Rotterdam for three years making his professional debut in the process. He took an intermediate step in the form of Heerenveen before joining his current club PSV. Dumfries turned into an inspirational figure for the club and captains them in the Eredivisie. The fullback is an important source of creativity for his side and plays a key role in defence as well.

Dumfries was eligible to play for Aruba due to his paternal links. He even represented them in international friendlies before a call up the Dutch team turned his head. An international debut for the Netherlands followed in 2018. He was a regular in the starting eleven since then and Euros helped him nail his starting spot forever. Dumfries registered two goals at the Euros and earned a man of the match award to seal a move to a top club.

Inter Milan are on a mass clearance spree. They have offloaded their star wing-back, Achraf Hakimi for a hefty margin. Their Belgian superstar striker Romelu Lukaku sealed a move to Chelsea in a big-money deal. The board has also hinted at further departures from the club before the season begins. A major change in the dressing room might decide their future. Simone Inzaghi impressed everyone at Lazio and gets his first big crack at a top club.

18 & 22 – Since making his Eredivisie debut in 2016, Denzel Dumfries recorded more goals (18) and assists (22) than any other defender in the league. Transferred. pic.twitter.com/8yLRwieadF

Similar to Conte, Inzaghi employs a three-man back. He favours using a 3-5-2 with wing-backs key to their width. The wing-backs constantly bomb forward and look to play first time crosses into the box. If the chance arises, they might even make a run into the box to be on the receiving end of crosses or cut-backs. As they are shielded by three centre-backs and low block midfield, the defensive duty drastically decreases on the wing-backs.

This is where Dumfries directly slots in at Inter Milan. Dumfries is a right-fullback who is full of energy and can maraud up and down the pitch endlessly. He has solid crossing and good attacking intelligence to arrive in the box. Solid physicality and the ability to read the game and position himself correctly are his other strengths. However, he needs to improve in his defending and needs to show some restraint in tackling. Dumfries often commits cheap fouls that might lead to chances for the opposition.

Achraf Hakimi arrived at Inter Milan just over a year ago from Real Madrid. It looked like a steal as they got their hands on a solid prospect. The Morrocan international lived up to his hype by scoring 7 goals and assisting a further 8 times to help them win the league. PSG moved in to cash out on Inter’s crisis as they were forced to sell Hakimi. Hence a potential long term bond was cut short abruptly.

Denzel Dumfries has joined Inter Milan from PSV for a total of €15m including bonuses. [@marcotimmer]

One of the best performing players at Euro 2020 👏👏 pic.twitter.com/V7evVUlakH

Inter dipped into the market to find Hakimi’s ideal replacement. Dumfries’ constant performances made him a top target for Premier League clubs like Everton and Manchester United. Inter acted quickly and are about to sign Dumfries before the window closes. Dumfries goes straight into the starting lineup at the San Siro and look to continue his development.

On the defensive side, Dumfries is a better tackler than Hakimi owing to his sheer physicality. He totalled 70 tackles in the Dutch league with a 60% success rate. Hakimi meanwhile had only indulged in 51 tackles with a success rate of 50%. Dumfries needs to improve his pressing to match Hakimi’s output.

Overall, he is an ideal like for like replacement for Hakimi and would help the club fulfil its mission going forward.