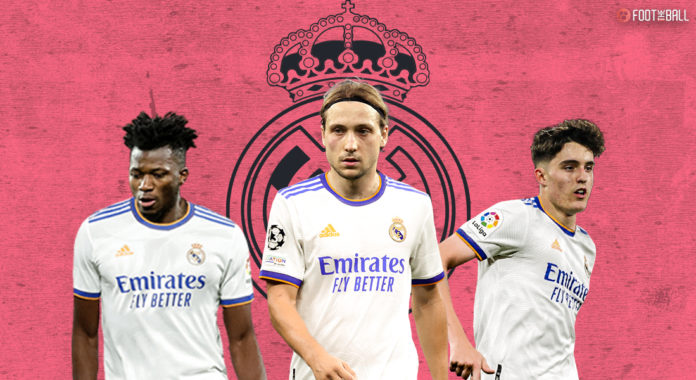 Real Madrid are set for a bigger summer in the transfer market in 2022. Los Blancos will certainly try to sign Kylian Mbappe, who was close to joining the kings of Europe last summer and even in the winter window.

Mbappé wanted to leave PSG now… and the deal is official. Here we go confirmed. pic.twitter.com/MvFNudxI6o

Rumours in fact suggest that they will also be in the race for Erling Braut Haaland, whose release clause gets activated in the summer. Clubs will be able to sign Haaland in the region of 70 million pounds which is nearly half of his actual value.

Los Merengues do have the finances to sign Mbappe and Haaland in the same window especially if they get rid of the deadwood and are looking to build a team around the two superstars.

But what is strange is that Real Madrid are not being linked to anyone substantial except the two attacking superstars. Despite Carlo Ancelloti’s current squad possessing some gaping holes and desperately needs an injection of younger talent.

🇳🇴🇫🇷 Haaland doesn't mind playing with Mbappé at Real Madrid but that's a topic he'll think about – because he'll be sharing the spotlight with the Frenchmen. @MarioCortegana

This Madrid side currently also have gaping holes and have been supremely lucky this season sitting on top of La Liga. Benzema has been outperforming beyond belief and powering this Real side.

So we at FootTheBall, are here to bring you some realistic transfers that will transform Real Madrid into an actual superpower again especially if they can sign Mbappe and Haaland.

Real Madrid were smart to sign David Alaba on a free because if they had not they would have really struggled this season. Alaba is an excellent defender but still needs a competent partner next to him, something Ramos would have been perfect for. But Ever since Sergio Ramos’ departure, Eder Militao has failed to take his position and Nacho is a decent squad player but in no way can replace Ramos.

Back in Leverkusen! ⚫️🔴 #Bayer04 pic.twitter.com/WW8tMyNMv5

Edmond Tapsoba has quietly been one of the best centre backs in Europe since his move to Bayer Leverkusen. He has been ever present in the Bayer back line since his move. He is the most important defensive cog in Gerardo Seoane’s Bayer side this season. The centre back is extremely physically dominant and carries a threat even in the opposition box too much like Ramos at Madrid. Tapsoba is also an extremely aggressive yet clean defender, his defensive judgement is world class. He is also an excellent progressive passer and carrier.

Still 23, Edmond Tapsoba is still flying under the radar and will instantly improve the Real Madrid defence, he will only cost a little over 40 million Euros, a very doable transfer fee for Los Blancos.

Dani Carvajal is getting old and Real Madrid don’t seem to possess another natural right back.  Lucas Vasquez does deputise for his compatriot as a right back when needed but is not very effective defensive or in the attacking third. Making him an obvious weak link. Especially after Ferland Mendy was signed to take over from Marcelo. Real Madrid do desperately need a right back that can take over from Carvajal in a season or two.

Valentino ‘Tino’ Livramento, has been a huge success at Southampton this season. The Chelsea academy graduate is having his breakout season in Senior football this year. He was signed by the Saints for a pittance who are set to make big money on Tino, who is  also being linked to the Red Devils to provide competition for Wan Bissaka. Actually to take over from the under performing Manchester United full back.

Livramento has been phenomenal this season going forward and even defending. His potential is scary and can definitely become the best in the world in his position.

If the kings of Europe are able to sign the England youth international they will actually be getting an upgrade of Carvajal who only beats Tino in two metrics which are passes attempted and pass success percentage. But Livramento plays for a counter-attacking Southampton side that hardly dominates the ball, thus those metrics will improve if he moves to a side that dominates the ball. Despite the signing of Vinicius Tobias, they would still need a more capable replacement for the Spaniard.

Luka Modric will go down as one of the greatest players from his generation. The man who beat Lionel Messi and CR7 to the Ballon D’or. The Croatian is still going strong at 36! People forget about just how good he is and how important he is to Los Blancos. Just look at his performances against Chelsea in the Champions League.

Eduardo Camavinga and Fede Valverde are set to replace Toni Kroos and Casemiro’s output. But Modric still needs an understudy especially since he and Madrid cannot seem to agree on a new contract.

Coincidentally our pick to replace Luka is another Croatian, Lovro Majer. Majer has been the creator in chief for a high flying Stade Rennais this season. The 24 year old is the archetypal modern 8/10 hybrid who can replace Luka Modric. The similarities between the two Croatians are uncanny.

If Los Blancos sign him after Luka Modric’s departure it will be like the 2018 Ballon D’or winner never left.

Lovro Majer emerges as a potential heir to Modric for Croatia: https://t.co/VAKX8OhNq6 pic.twitter.com/ZTxZH96YO1

If Real Madrid get Kylian Mbappe and Erling Haaland in the summer transfer window, they should sign the three players we suggested or the team would be too unbalanced to realise its own peak.