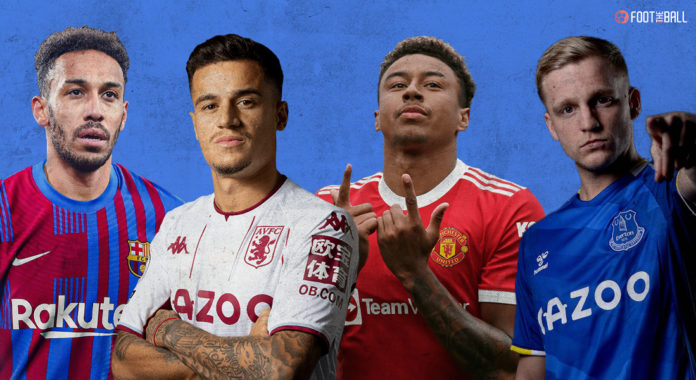 The winter transfer window is now over in Europe with several interesting deals getting over the line on Deadline Day. Clubs near the top tried to fortify their positions while those near the bottom strengthened to get out of the quagmire. Though the number of deals over the month was less as was expected in the pandemic-affected times, there were some notable movements and even more notable no movements. FootTheBall brings you the winners and losers after all the wheeling and dealing is now complete.

One of the surprising entrants in this category, given how dicey the Ousmane Dembele situation looked when the month started. Dembele remains at Camp Nou after no suitors materialized but it is the new additions who have now taken the headlines. Ferran Torres, Adama Traore, and Pierre-Emerick Aubameyang are solid signings to bolster a fledgling frontline.

A permanent transfer, a loan and a free deal constitute some masterful work on the part of the Barcelona board. They will not have to rely solely on academy graduates now, which will benefit both ways with the youngsters showing fatigue in recent times. If Dembele can be reintegrated into the setup along with Memphis Depay finding form, top four could certainly be a possibility heading into the business end of the season.

He has been “freed” as the popular saying went after Everton signed the Dutchman on loan till the end of this season. New manager Frank Lampard has wasted little time bolstering the creative options in midfield with hopes of a top-half finish. Van de Beek’s plight at Manchester United has been well documented under successive managers, playing just three minutes over the team’s last seven matches.

He will slot right into the Toffees’ midfield and look to recapture the spark that was so evident at Ajax. Though it is only for six months, this move will be crucial in getting back into the national team picture as well with the World Cup looming.

Three first-team players out, two first-team players in. Juventus had a masterful and thoughtful window, with definite upgrades to get into the top four. Serie A’s hottest young prospect Dusan Vlahovic finally made the long drawn out move, and to a rival no less. The Bianconeri had designs of offloading Alvaro Morata, but with Vlahovic now present, a reliable goal scorer who has still not reached his peak has been added.

Dusan Vlahović: “There were lot of rumours about clubs from abroad… but it was an easy choice for me [to sign for Juventus]. This club has winning mentality, like me”. ⚪️⚫️ #Juventus

“I’m extremely happy – I’m joining a glorious club and this is what I wanted. I can’t wait”. pic.twitter.com/7OMzCVyNUq

The second addition was Denis Zakaria for 5m euros, who could be a much better all-round midfielder on both ends of the pitch. Another acquisition made with thoughts on the future as Max Allegri looks to chase down his target of silverware and Champions League qualification. Dejan Kulusevski and Aaron Ramsey barely featured this season while Rodrigo Bentancur was also a bit-part player and they both made their exits.

One player who will not be there to see what course the Blaugrana take in the final half of the season. Coutinho’s big money move never really worked out due to injuries, loss of form due to being played out of position and just lacking confidence. Barcelona were looking for ways to reduce their costs any way they can and Aston Villa emerged as the saviours.

Philippe Coutinho's late equaliser against Manchester United is our January Goal of the Month! 🥇 pic.twitter.com/S3cRixNyno

Reuniting with former teammate Steven Gerrard already seems to have had a strong effect, with the Brazilian notching up a goal and an assist on his debut to rescue a point against Manchester United. He looks to become an automatic starter for the rest of the season and could well see his loan move becoming permanent in the summer.

All eyes were on the richest club in the world and what they would achieve in their first transfer window under new owners. At the end of it, the Magpies are in a much more solid position than from where they started January. Kieran Trippier became the first signing, providing an instant upgrade at right-back with crossing and tactical knowledge. Chris Wood’s signing was needed with Callum Wilson out injured, while the arrival of Bruno Guimaraes was a real shock.

The Lyon midfielder is a powerhouse of talent and box-to-box abilities which will provide a real boost for Eddie Howe in their bid to avoid relegation. The signings of Dan Burn and Matt Targett (loan) on deadline day was another shrewd piece of business to bolster the defence, given how they have leaked in the second-most number of goals so far (43). A very satisfying month for everyone associated with the club which should see them remain in the Premier League for next season too.

It is hard to see the window as anything other than a missed chance to strengthen for the Gunners. They made space in their squad with several fringe players leaving including Calum Chambers, Ainsley Maitland-Niles, Pablo Mari, and of course, captain Aubameyang. The departure of the Gabonese leaves them woefully short in attack, with Alexandre Lacazette and Eddie Nketiah their only true number 9 options.

Arsenal in the January transfer window:

Both are out of contract in the summer, meaning an overhaul is coming but the more pressing concern is how well they can finish the season. The squad is now essentially only filled with key players with little room for rest or changes to the lineup. If any injuries or loss of form were to happen, Mikel Arteta would suddenly be severely short of options to cope up with them.

Another top four chaser who finished the window empty-handed. The Hammers also have a mostly settled squad but one position they were certainly looking to improve was the attack. Michail Antonio remains the only out-and-out striker but he is not the quickest around and often tires towards the end of matches.

👀 “You’re pushing for top four, you’re in the latter stages of Europe…”

They tried for Darwin Nunez but were knocked back yesterday and made no other indications of signing anyone else. The no-show will certainly not please David Moyes too much, given he has Europa League commitments to look after as well. The inability to score through forwards might just prove to be a death knell to their Champions League aspirations for next season.

The one fringe attacking midfielder in the Premier League who did not get a move away. Having seen Van de Beek and Dele Alli both secure their foreseeable future elsewhere, Lingard must be pretty bummed right now. He has seen just a minute of action over Manchester United’s past five games and is a free agent in the summer. No doubt he will be leaving Old Trafford, but many wonder whether a deal should have been done right now in order to get some transfer fee too.

Jesse Lingard will sure at Man United, final decision has been made. The plan was always that Jesse would stay – club convinced he will be an important player in second half of season. 🔴 #MUFC

Jesse’s expected to leave Man United as free agent at the end of the season. pic.twitter.com/KGDnXOI8Rt

It could be that United did not want to strengthen a rival in West Ham but Newcastle were also interested. Ralf Rangnick has often spoken of keeping but the reasons are far less clear. Unless there’s a sudden emergency that requires the 29-year-old, it’s really hard to see how his game time will increase over the coming months.

A quiet transfer window for the Rossoneri but could it prove fatal to their title or even European hopes? Milan only added 17-year-old striker Marko Lazetic while their rivals stocked up considerably. Juventus, as mentioned, brought in two world-class players but the rest were not far behind. Defending champions Inter got dynamic wingback Robin Gosens and Felipe Caicedo as their backup striker. Atalanta splurged the cash on Jeremie Boga to replace Gosens and got another young wide man in Valentin Mihaila.

📝 DEAL DONE: AC Milan have signed Marko Lazetić from Red Star on a contract until June 2026.

Roma signed Maitland-Niles and Sergio Oliveira to make a late dash for the top four themselves. Milan will hope they can keep up their current momentum but any kind of wobble will only embolden the chasing pack.

It’s never a quite transfer period with this club but the headlines this time were written by one of their own players. Mason Greenwood has been arrested for allegedly physically assaulting his partner Harriet Robson. No doubt his career at this level looks to be all but over given the seriousness of the crimes described. Coming to the team setup, the midfield weakness issue remains for another six months with the board possibly waiting for the new manager in the summer.

Van de Beek, Anthony Martial and Amad Diallo left but Lingard remains with no discernible reason as to why that’s the case. The frailties remain and they haven’t been adequately addressed which will only make their rivals happy, especially Spurs who had a fantastic time clearing deadwood and bringing in solid additions. Top four is a daunting task and it’ll only get tougher with time.