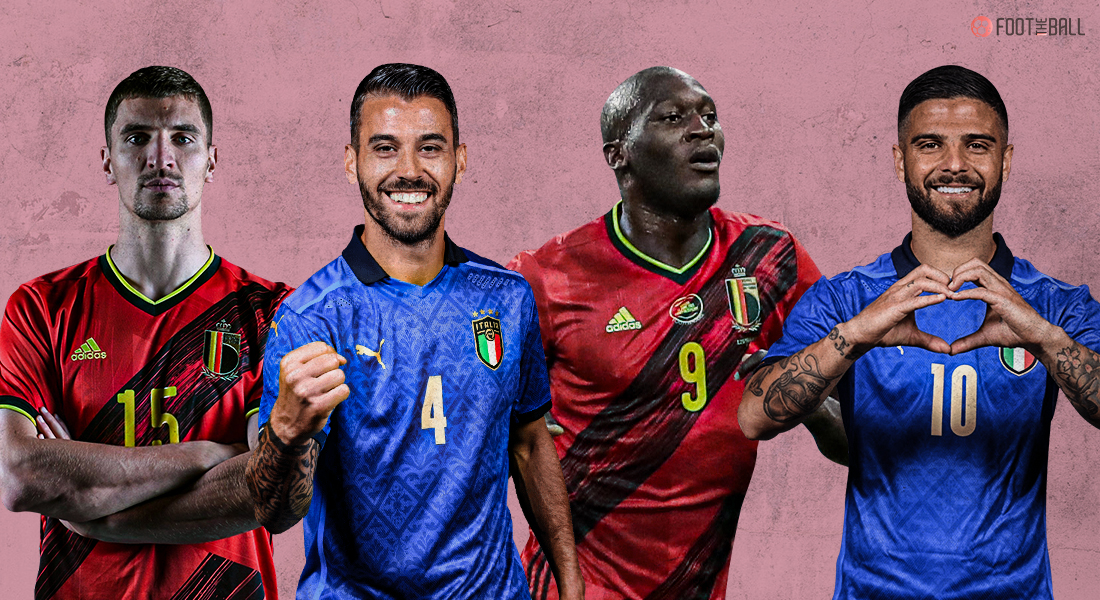 The quarter-finals bracket for Euro 2020 is almost set, with three of the four fixtures already known. In one of the heavyweight bouts of the round, Italy take on Belgium with the latter shorn of two of their own superstars. The Azzurri are on a fine hot streak of 31 games unbeaten while the Red Devils will look to justify their status of world number one. FootTheBall presents the combined XI of this epic clash.

One of the hardest decisions to make, even though there are only two to choose from. Neither Courtois nor Donnarumma have had too much to do so far at the tournament. However, the Belgium number one had a finer display in the round-of-16 than his Italian counterpart.

Courtois produced two good saves, one from a swerving free-kick and another at point-blank range from a header following a corner. Those two stops were crucial in them keeping their slender lead to see out the match. Donnarumma, meanwhile, has had the help of a superior defence and was even beaten at his near post against Austria. The Real Madrid custodian thus gets the nod for a more steady showing.

Meunier has been a steady presence for Belgium, offering a defensive solidity along with attacking runs. His assured nature on the ball gives the Red Devils an additional presence down the right when they move forward. Meunier also has an affinity to take shots on and has even scored during the course of the tournament.

All of which gives Roberto Martinez some much needed attacking impetus as he deals with the key absences. Meunier’s linkup play is often understated, but he finds spaces down the flanks and near the penalty box which ends up with him creating chances for teammates.

The Lazio centre-back did not enter the tournament as the first choice beside Leonardo Bonucci but has been immense in his appearances. Quicker than the ageing Chiellini, and having a fine positional sense during set-pieces will come in very handy. Against Austria, the 33-year-old had a superb showing, with a passing accuracy of 92% along with eight recoveries, four interceptions and one assist.

He will be facing the beast that is Romelu Lukaku which will need Acerbi to be aware of his surroundings. Acerbi is also known for not shying away from tackles and his duel with Lukaku will go a long way in determining who comes out on top in that part of the pitch.

Belgium’s vice-captain has had a fine tournament so far, as part of the three man defence. Vertonghen has been charged with the left side of the pitch and was instrumental in keeping Cristiano Ronaldo quiet. He had a passing accuracy of 93% with three recoveries and four clearances. Vertonghen’s leadership qualities are also well valued by a team that is a bit thin on natural leaders on the pitch at times.

He is an aerial presence in both boxes which will add to Belgium’s threat from set-pieces. Vertonghen has not been troubled too much so far, but against Italy’s multi-faceted attacking players, he will need to bring his A-game if they are to progress further in the tournament.

Already a two-time star of the match winner, Spinazzola has been one of the revelations of the tournament. His ability to combine attacking runs with defensive nous has been crucial in them conceding just one goal while scoring nine. He had an assist with four duels won and nine recoveries made against Austria, while constantly looking as one of the most threatening players.

⚡️ Electric in attack, brilliant at the back. Leonardo Spinazzola picks up his second Star of the Match trophy! 👏@Heineken | #EUROSOTM | #EURO2020 pic.twitter.com/AFjxRck4Bk

Spinazzola’s strong performances have seen him in the midst of heavy transfer speculation which is only to continue if Italy go further. He overlaps constantly and is able to supply crosses accurately which will be another key weapon for them.

One of Italy’s strongest players at Euro 2020, Jorginho has been essential ever since the start of the competition. His visionary passing and creative faculties have been a big reason why the Azzurri have had such a steady midfield. Jorginho is most effective when he is moving the ball forward, looking for the runners around him.

Jorginho has completed the most passes, tackles and interceptions for Italy so far at #EURO2020.

He also completed the most passes, tackles and interceptions for Chelsea in our 2020/21 Champions League campaign.

Deployed in the middle of the three-man midfield by Roberto Mancini, he is also the player tasked with falling back when oppositions have the ball. With Kevin De Bruyne out, Jorginho can become the most dangerous asset on the pitch if Italy are able to play to their strengths.

Injured to start the competition with, Verratti made a stirring comeback against Wales in their final group match. His clever free-kick led to the game’s only goal and that earned him the nod to start in the round-of-16. Verratti did not disappoint, posting a match-high passing average of 96%, making nine recoveries and winning 10 duels.

9 – Only Daniel James (10) has created more chances at #EURO2020 than Marco Verratti (9), despite the Italian playing just 135 minutes at the tournament so far. Strings. #ITAAUS pic.twitter.com/9GKjbfKrvw

It is easy to see why Mancini benched the in-form Locatelli for the PSG man. Verratti is unplayable on his day, and also is a keen helper in defending as he provides a double teaming option down the flanks. Verratti’s influence will be keenly felt in a match where there’s quality across both sides.

Another player to come into the tournament after the initial round of games. Witsel has provided the much needed defensive depth required in midfield. Given that the Red Devils are stacked on attacking riches, Witsel’s tendency to stay deep allows Youri Tielemans and Kevin De Bruyne to play freely further up the pitch.

So proud to be on the pitch with this team! Great strength to fight together for our place in the quarter-finals 💪🏽🇧🇪 #DEVILTIME #EURO2020 #AW28 pic.twitter.com/AXeBXn3v1f

With De Bruyne gone, Witsel might find himself being asked to showcase his creative talents as well. Italy have a lot of goal scoring options which will require Witsel to keep a close watch on the ball. The Dortmund midfielder is also known to take on shots from long range if the opportunity arises, which can only bode well.

The Napoli captain is having a fine tournament, playing on the left of Italy’s front three. A consistent attacker with the ability to beat defenders one-on-one, Insigne will be relied upon to stretch the back-line of Belgium. Furthermore, his low centre of gravity allows Insigne to get to the wrong side of the defence frequently.

“It's the first time I’m playing in a competition as a protagonist, I’m honored, I’m living in a fairytale right now. I’m giving more than 100% to repay the belief of the team and the coach putting my qualities on display to reach the one goal we have”

Possessing a dangerous shot and not shy of utilising it, he will be ably supported by Italy’s enviable midfield. If his runs are not tracked adequately, the Azzurri have a great chance of scoring early. He is also adept at set-pieces which adds another facet to his all-round game.

Lukaku has showcased his wonderful development of his play, becoming more than just a goal scorer. His hold up play with the ball is considered one of the best in the game, allowing other teammates to join the attack. He is also extremely agile while running with the ball, gliding past opposition players due to his pace and skill.

Often it comes down to fouling him in order to stop the big man as Portugal did do. Coming to his lethalness in front of goal, Lukaku’s unerring eye for goal is a constant threat. He is able to expertly manoeuvre space inside the penalty box as well as his threat from set pieces will be a key component of Belgium’s attacking threat.

Though he had an off day against Austria, striking the bar from a long distance, Immobile still remains Italy’s chief threat up top. The Lazio striker is able to get his shot away very quickly and makes intelligent runs interchanging positions with the front three. Immobile’s heading is also a threat to defences as well as his ability to strike from long ranges.

Ciro Immobile will be looking to add to his goal tally when Italy take on Austria later tonight..#BettingMadeSimple pic.twitter.com/xb23vpGVgN

He has been a trusted lieutenant of Mancini since he took charge, and has repaid the faith by scoring regularly. His teammates behind him will look to supply him with passes whenever the chance arises against a sometimes slow Belgian back-line that needs to be highly alert.