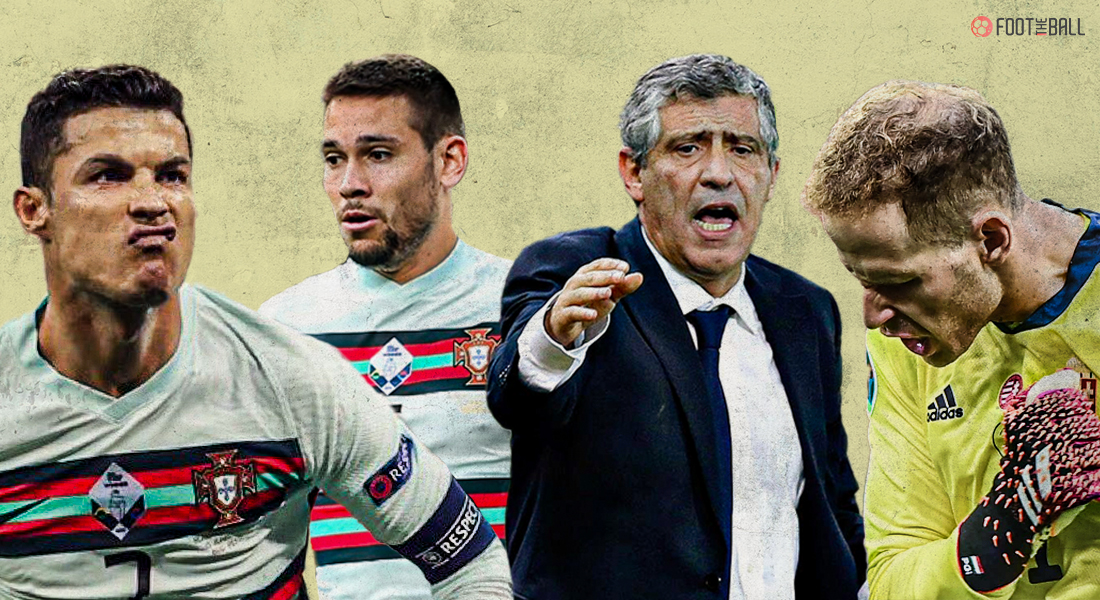 Cristiano Ronaldo’s record-breaking goals secured Portugal a hard-earned win over a dogged Hungary. Portugal had to dig deep in order to win the game 3-0. Raphael Guerreiro’s deflected strike gave them the lead and the inevitable Ronaldo’s goals sealed the deal. Hungary fought with all they have but weren’t lucky to take anything from the game.

A fully packed Puskas Arena in Budapest welcomed the defending champions Portugal for their opener. The vociferous Hungarian crowd cheered every touch of their team ad jeered every pass by the opposition. After an eternity we saw what a full crowd could add to a football match.

Portugal dominated the earlier proceedings with chance after chance. Diogo Jota had a chance early in the game. He went for the shot instead of finding an unmarked Ronaldo. The Selecao created chances easily but were struggling to take them. Ronaldo himself missed blazed a simple finish over the bar. A frustrating first half came to an end.

Szabolcs Schön thought he did the unthinkable as he scored in the 80th minute but was pegged back by the offside flag. Hungary improved massively in the second half but were extremely unlucky as the Portuguese turned up the tempo in the final minutes.

Portugal were the undoubted favourite coming into the match. Hungary were supposed to be a mismatch and the punching bags in a tough group. To their credit, the hosts showed utmost character. Backed by their crowd they defended for their lives. They hunted in packs whenever a Portuguese player entered their box. They are so unfortunate to end up losing 3-0.

You could argue that this Portuguese starting eleven was better than the one that won the cup back in 2016. It has world-class quality all around the park. Fernando Santos opted for a 4-2-3-1 to have defensive stability in the middle of the park to let their front four operate freely. Their four forwards in imperial form Bernardo Silva, Diogo Jota, Bruno Fernandes and the legendary Cristiano Ronaldo were supposed to tear up any opposing defence.

Marco Rossi’s home side were a little adventurous in their approach. The 3 men backline was protected by 2 wingbacks to cover wide areas. Their midfield was compact and was closing down spaces constantly. Rossi surely missed Dominik Szoboszlai who could’ve surely changed their counter-attacking dynamic.

Cristiano Ronaldo created history just by being named in the starting lineup. He became the first player to appear in five European Championship finals. He was there from the cruel heartbreak in 2002 to the title triumph in 2016 and the title defence in 2020.

Knowing Ronaldo and his hunger he would want to break records by scoring and not just by appearing. He was searching for that goal that would make him the sole high-scorer in the history of the European Championships. He was tied with Michel Platini of France with 9 goals. Ronaldo missed a header early in the game and blazed a tap-in in the first half. Just when things were frustrating he found his lucky charm.

Rafa Silva came off the bench to swing the game in Portugal’s favour. He was involved in all three goals. First, his deflected cross found its way to the left-back Raphael Guerreiro whose shot deflected past a stunned Peter Gulacsi. Silva won the penalty again for Ronaldo to create history. Ronaldo calmly rolled it to the right corner of the net and notched up 10 goals at the finals. Ronaldo again played a one-two with Silva to dance past defenders and slot it past Gulacsi to make it 11 for himself. He has eyes on more international scoring records before the tournament ends.

THE GROUP OF DEATH HEATS UP

Portugal were drawn in the group of death with World Champions France and juggernauts Germany. When they found out that their first game was against Hungary their eyes lit up. A comfortable three points could’ve sent them in the right way in the title defence.

A positive start was needed and it did happen. A late fixture between Germany and France would decide who will top the group. They must prepare for tougher fights and must have that mental strength if they are to repeat their heroics. Also, they left it late against Hungary but they would be aiming to find their shooting boots earlier in those games.

Hungary were the punching bag of the group. They were expected to submit to each and every team without a minimum fight. The hosts simply refused to do that. Their crowd sucked the life out of opponents in the first half. A stellar defensive display took them to tunnel level with Portugal. Peter Gulacsi played his heart out in goal.

They grew in the second half massively. They held onto the ball for longer periods of time and made life difficult for the visitors. Szabolcs Schön almost pulled off a coup only for an offside flag to cancel it. From then on their luck ran out. Portugal found their groove and finished Hungary off in the final 10 minutes ruthlessly.

A 3-0 scoreline feels very harsh on them. They face France and Germany next up. They might be praying to find courage and luck once again.