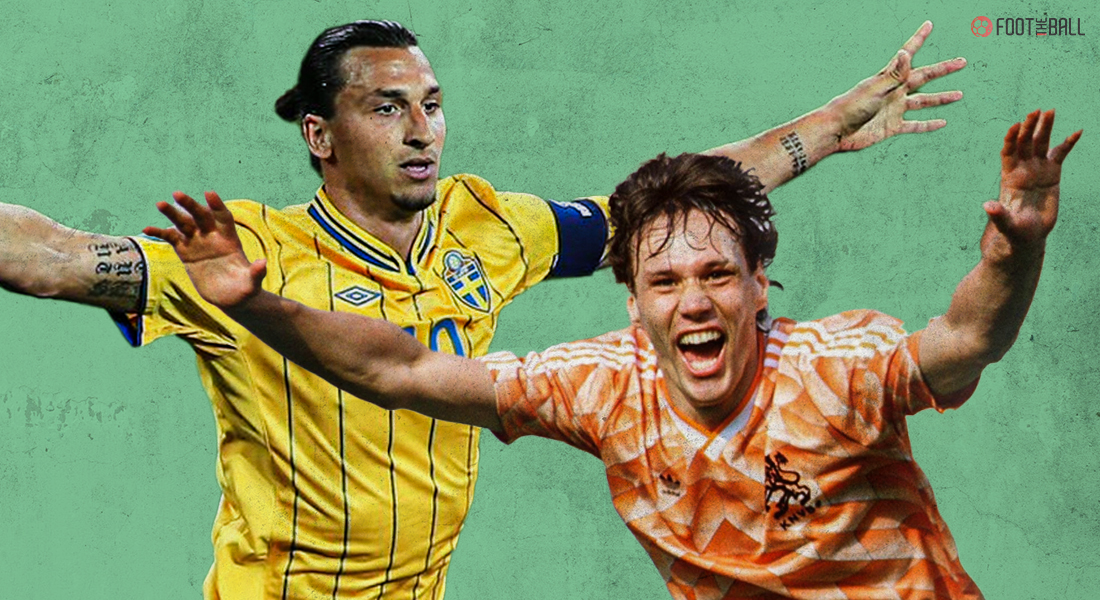 It’s only been three days since Euro 2020 kicked off, but we’ve already seen some spectacular and jaw-dropping goals. However, one goal that stood out and would require a miracle to surpass as the best goal of the tournament is Czech Republic striker Patrick Schick’s wonder goal in their win against Scotland.

In Czech Republic’s opening match of the tournament, the Bayer Leverkusen striker scored from just inside Scotland’s half, lobbing goalkeeper David Marshall from about 50 yards out.

His strike was the perfect blend of technique, skill, and power and will live in the memory as one of the all-time great European Championship goals.

The 25-year-old’s incredible goal has prompted us to reminisce on some of the great goals from the European Championships. In that case, here are the top 10 goals in the history of the Euros.

At the Euro 2000, Trezeguet’s golden goal in the 103rd minute against Italy proved decisive as that goal made France the first World Champions to win the following UEFA European Championship.

The Frenchman’s quality and technique were simply outstanding. Trezeguet twisted his body, placed his foot over the ball, and hammered the shot into the top bin to make the score 2-1 and help his nation win the Euros.

Sweden entered their last Euro 2012 group match facing France with nothing to lose. That didn’t stop Zlatan from delivering a stroke of brilliance to amaze the travelling supporters.

The striker, renowned for his acrobatic goals, met the cross from Sebastian Larsson and launched his entire body into what was basically an unstoppable scissors kick to send the ball smashing into the goal to make the score 2-0 and beat France.

🤔 Who else could score this goal?

Hugo Lloris had no time to react as the ball went in the net, and the effort was duly named the goal of the tournament.

In his 104-goal career for his country, the famous Portuguese has produced several amazing goals, but his greatest in the Euros came in a dramatic tie against Hungary in 2016.

Both teams met in a Group F match, with Portugal requiring at least a draw to remain in the competition. However, Hungary seized an unexpected 2-1 lead, leaving the Selecao at risk of being eliminated in the group phase.

Ronaldo was in space after a cross from Joao Mario, but the tight angle required something clever. The ball managed to squeak beyond the Hungarian goalkeeper thanks to a clever back-flick from the number 7. Portugal drew the game and eventually went on to win the tournament.

In 2004, Ibrahimovic was still regarded as a promising ‘prospect,’ an up-and-coming player with enormous potential. The Swede was still at Ajax and had enjoyed a decent season leading up to Euro 2004, scoring 13 goals in the Dutch Eredivise.

But what Ibrahimovic did against Italy was absolutely phenomenal.  With his back to goal and Buffon racing at him, he exhibits some of the black belt-esque Taekwondo abilities, flying up to use his backheel to send the ball looping over the defender on the goal-line and into the net.

The match between Poland and Switzerland in the round of 16 of Euro 2016 witnessed a spectacular goal by Xherdan Shaqiri in the final moments, with the Swiss trailing 1-0.

The Liverpool winger pounced on to a high ball deflected off his teammate and produced a blistering bicycle kick that utterly puzzled goalkeeper Lukasz Fabianski. Although Shaqiri drew Switzerland back into the game, their joy was short-lived as Poland won the match on penalties to advance to the quarter-finals.

This piece of utter brilliance was pulled off by Robson-Kanu against Belgium in the quarter-finals of Euro 2016. Hal Robson-Kanu controlled a cross from Ramsey comfortably with his back towards the Red Devils’ goal.

Three Belgian defenders charged at him from various directions and were all sent fleeing by the then 27-year-old striker as he faked a cutback and instead pulled off a Cruyff turn to get one-on-one with the keeper. He made no mistake placing the ball calmly into the back of the net and helping his nation reach the semi-final of a major tournament for the very first time.

This wonder goal happened in the Euro 2004 semi-finals when Portugal was the host country and memorably lost to Greece in the final.

A teenage Cristiano Ronaldo took a short corner, sending the ball to Maniche, who fired an incredible missile into the top right bin from the corner of the penalty area to help Portugal reach the finals. Although a crushing 2-1 defeat to Greece in the final shattered the Portuguese hearts.

In Croatia’s 1996 World Cup group match against Denmark, the crafty Davor Suker crushed the Danes with two goals and an assist, the second of which was a beauty.

Suker was being pursued by three defenders as he dribbled towards the goal, so he unleashed a fantastic chip with the outside of his left foot over Peter Schmeichel, who was indisputably the best goalkeeper in the world at the time, and defeated the defending champions.

There are bad players, good players, and outstanding players. Then there are the players who produce moments that are so amazing, breathtaking, and artistic that they are forever engraved in your memory.

Paul Gascoigne’s erratic brilliance was shown at Euro ’96 when he scored a spectacular goal for England against fierce rivals Scotland.

With a pass from the left-wing coming his way, Gascoigne flicked the ball over the incoming defender before superbly volleying home his own assist into the near bottom left-hand corner, a legendary goal.

The competition’s most renowned strike is without a doubt the utter perfection of this finish by Marco van Basten against Soviet Union in Euro’88 final.

A long, flighted cross from the left reached Van Basten on the right side of the Soviet penalty box, and the Dutch great blasted a volley first touch that cannoned into the far top left corner at an almost impossible angle.

🇳🇱 #OTD at EURO '88, Marco van Basten scored a famous volley in the final as the Netherlands became champions! 🏆

It was among the most remarkable exhibitions of technical talent in a goal that the sport has witnessed and also crowned them as the European Champions.