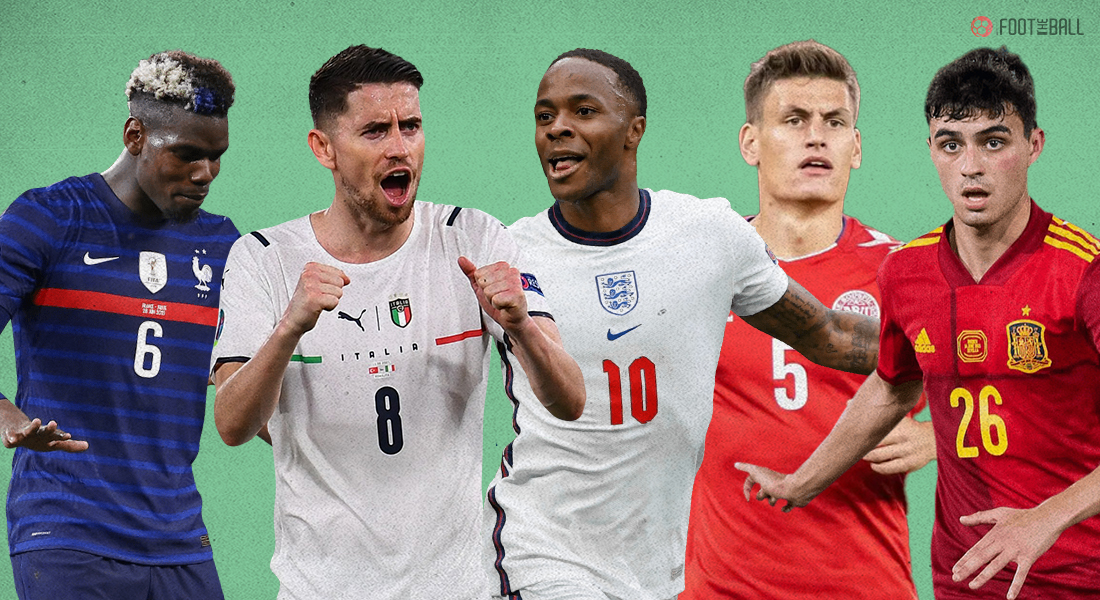 UEFA EURO 2020: WHO ARE THE CONTENDERS FOR THE PLAYER OF THE TOURNAMENT AWARD?

Fifty of the fifty-one matches of Euro 2020 have given the footballing world a lot of entertainment and while the ultimate showdown between England and Italy is still on the horizon, we, at FootTheBall, have tasked ourselves to pick the Player of the Tournament or the Winner of the Golden Ball (in World Cup terms) from what has been one of the tournaments for ages. 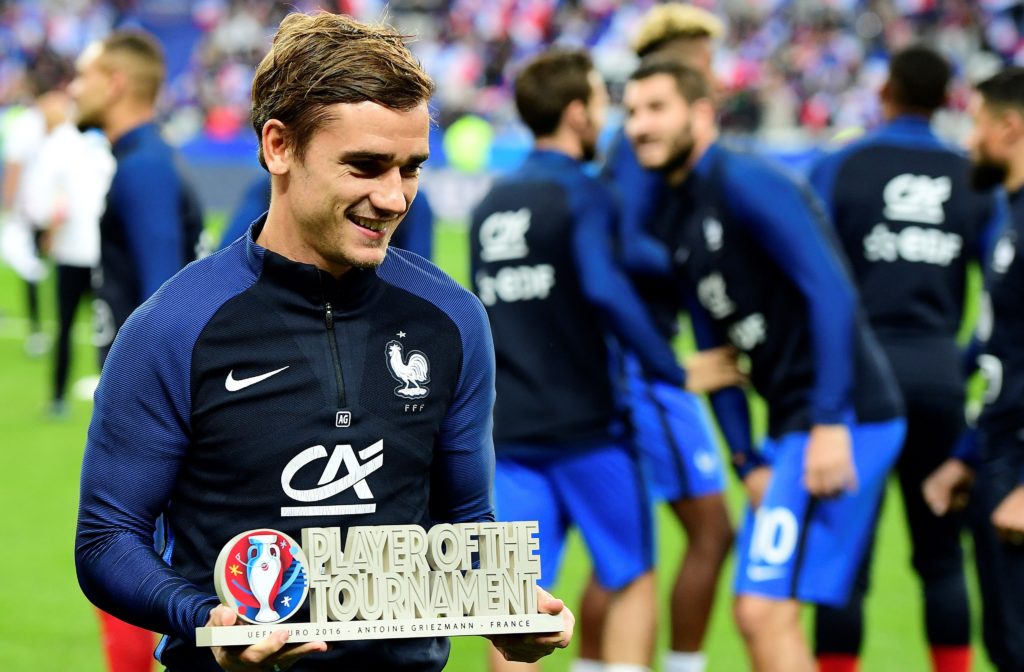 Antoine Griezmann after winning the Player of the Tournament award at Euro 2016. (Image Courtesy: UEFA / Website)

However, this tournament has been a special one such that players who have not reached the final have placed themselves in the reckoning for the award. Here are five players who can win the award this time around.

Gareth Southgate is known for raising the eyebrows of many fans and pundits during his managerial career with his team selections and he certainly did that when he chose to start Raheem Sterling ahead of Jack Grealish, Jadon Sancho, and Marcus Rashford in this tournament. Sterling had struggled for form coming into the Euros and there were doubts even regarding his place in the squad altogether.

Come the final of the tournament, Sterling has repaid the faith his manager put in him in gold and is surely the front-runner to win the award for the player of the tournament. While some can still debate about his presence from the start in this campaign, Sterling has certainly etched his name in English folklore with his clutch performances in the entire tournament.

Numbers can be misleading at times but not always and this is one such example – Sterling managed to find the net once in 16 games for Manchester City prior to the start of the Euros, he has since scored three, assisted once, and forced the opposition into scoring an own goal.

Directly involved in 6 of England’s 10 goals at the tournament. If they go all the way, he is THE undisputed Player of the Tournament. Respect him. pic.twitter.com/ins4KzRyfX

If England win on Sunday, Sterling will etch his name as an English legend due to his unforgettable performances in the tournament. Some turnaround for the much-maligned forward.

It has been a tournament for left-backs, with the likes of Leonardo Spinazzola, Robin Gosens, Luke Shaw, Jordi Alba, Steven Zuber having dazzled the tournament with superb performances in the group stages and the knockouts.

Joakim Mæhle has carried the ball into the opposition's box 12 times at #EURO2020, more than any other player.

But none have surprised more than Denmark’s Joakim Maehle, who, being a natural right-back, has tormented opposition defences with his directness in attack. The Dane registered two goals and an assist in six games, but it was his all-round game that caught the eye of fans of the game.

Defensively, he has commendable tackling and interception numbers, but it was in the attack that he blossomed, having some of the best numbers in the tournament, like the most entries with the ball into the opposition’s penalty area.

Alongside his dynamic all-around contributions, Maehle probably confirmed his presence in the Euro reels for a long time to come with a magnificent trivela cross against the Czech Republic which was headed in by Kasper Dolberg.

One of the most underrated players in the entire tournament, Jorginho is one of the primary reasons why Italy have reached the final of Euro 2020, and why Italy have gone on a 33-match unbeaten run, breaking the previous national record set in the 1930s.

🧠 Jorginho made 8 interceptions in Italy's semi-final penalty shootout win over Spain on Tuesday night, a record in a game at #EURO2020

Jorginho plays in a role similar to Sergio Busquets’ with Spain and Barcelona, a deep-lying midfielder who has a sharp eye, has tactical and spatial awareness, and plays that killer pass into the opposition third, without discounting defensive duties.

It has been a metronomic rise for the Brazilian-born Chelsea star and he is now irreplaceable in that Italian midfield which is stacked with talent. The Ballon D’or shouts might be unrealistic and even though he did not have any eye-catching moment until the semi-final, the ice-cold penalty which got Italy to the finals was enough for him to be lauded at last.

Jorginho has been one of those players whose presence might not be noticed in the side but their absence certainly is. Calmness runs through this Italian side and Jorginho is the embodiment of that trait.

After Wayne Rooney in 2004, it has taken 17 years for the footballing world to witness another 18-year-old taking the responsibility for running a game for his national side. Barcelona’s €10 million steal from Las Palmas – Pedri – has been the heartbeat of this Spain side in Euro 2020 and has shown maturity levels beyond his age.

Against Italy in the semi-final, Pedri completed 65 of his 67 passes, and for some, it might look like he might have played it safe, but it wasn’t the case. His performance represented his calmness, smoothness, ease, talent and the most important thing, mentality.

He might have not registered a goal or an assist, and Spain might have crashed out of the Euros at the semi-final stage, but Pedri has truly announced himself at the world stage after an impressive season at Barcelona and it is not a doubt that Andres Iniesta has an heir at club and country.

Had France not suffered a shock defeat to Switzerland in the Round of 16 fixture, it was absolutely certain that Paul Pogba would have truly been in the race for the award for being the player of the tournament at Euro 2020. Such has been his performances for Les Bleus that even though they have exited from the tournament, Pogba might have an outside to pip the likes of Raheem Sterling and become the third Frenchman to lift the award. 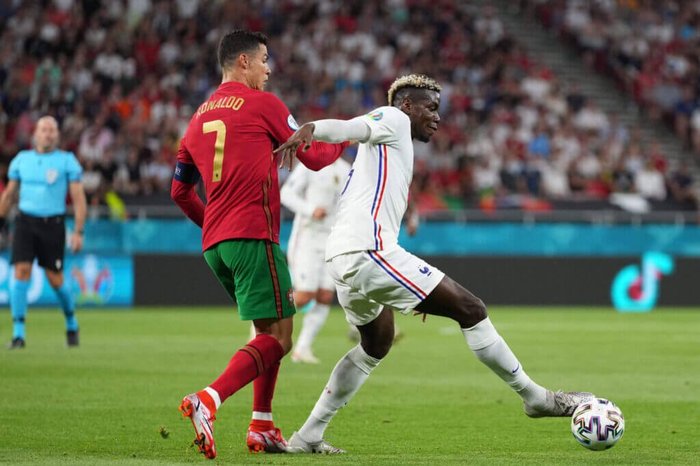 Pogba was at his very best against Portugal in the group stage at Euro 2020. (Image Courtesy: UEFA / Website)

He was world-class in the entire tournament and was the lynchpin of this French side as each and every attacking sequence of theirs had to go through him. In the game final group game against Portugal, the Manchester United star attempted 95 passes, 12 more than anyone else on the pitch, and completed 93 of those, displaying his true talent in the blue shirt.

And also, he does things only La Pioche can do. Such as this goal against Switzerland in the Round of 16, albeit in a losing cause.

Despite all the uncertainties surrounding the tournament, Euro 2020 has been a roaring success and so has the performances of these players. The award wouldn’t look out of place in the cabinet of any of the players mentioned above.