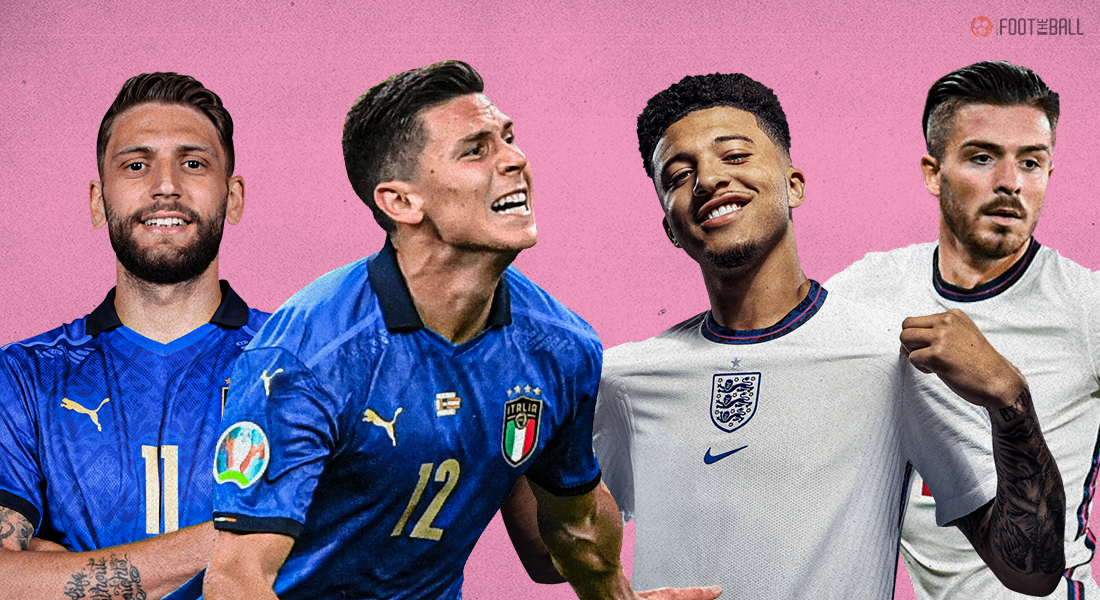 Some games are won by those who start on the pitch, while some of them are decided by those who are raring to prove the managers wrong who keep them on the bench.

And this ultimate showdown of Euro 2020, between Italy and England might well be decided by a substitute who can produce a moment of magic and help his side achieve the trophy.

Here are three substitutes from each side who can be the real game-changers for the nations in what might be the biggest game of their careers.

Federico Chiesa might have taken his place in the starting eleven since the quarterfinal against Belgium, but Domenico Berardi is still an important piece in the jigsaw puzzle of Roberto Mancini and will continue to play the same role against England on Sunday. 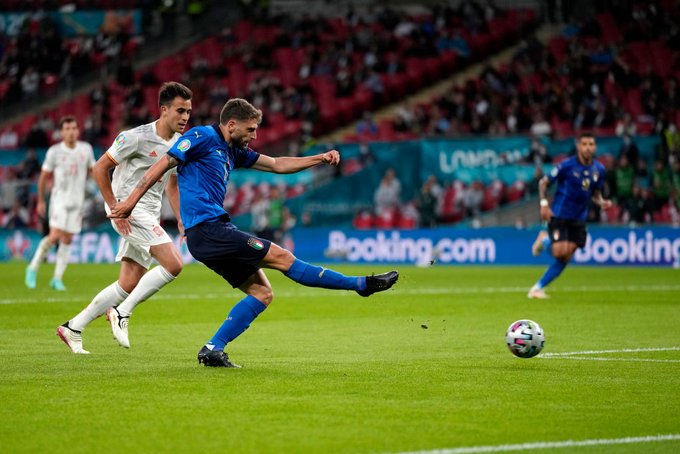 Berardi was a menace in the game semi-final against Spain at Euro 2020 after coming on as a substitute. (Image Courtesy: Azzurri / Twitter)

After featuring off the bench against Belgium for only 12 minutes where he was mainly tasked to keep the ball, Berardi was brought on at the hour-mark for an under-firing Ciro Immobile and he clearly made an impact as he made darting runs into the box and tormented the opposition defence heavily.

Mancini will hope that Berardi can display those performances that aided the Azzurri win in the early stages of the competition and help them achieve their second European Championship.

Rather than his goals against Wales and Austria, Matteo Pessina is known for his celebration as he dove face-first after scoring the second goal in the Round of 16 fixture after coming on from the bench in the second half. 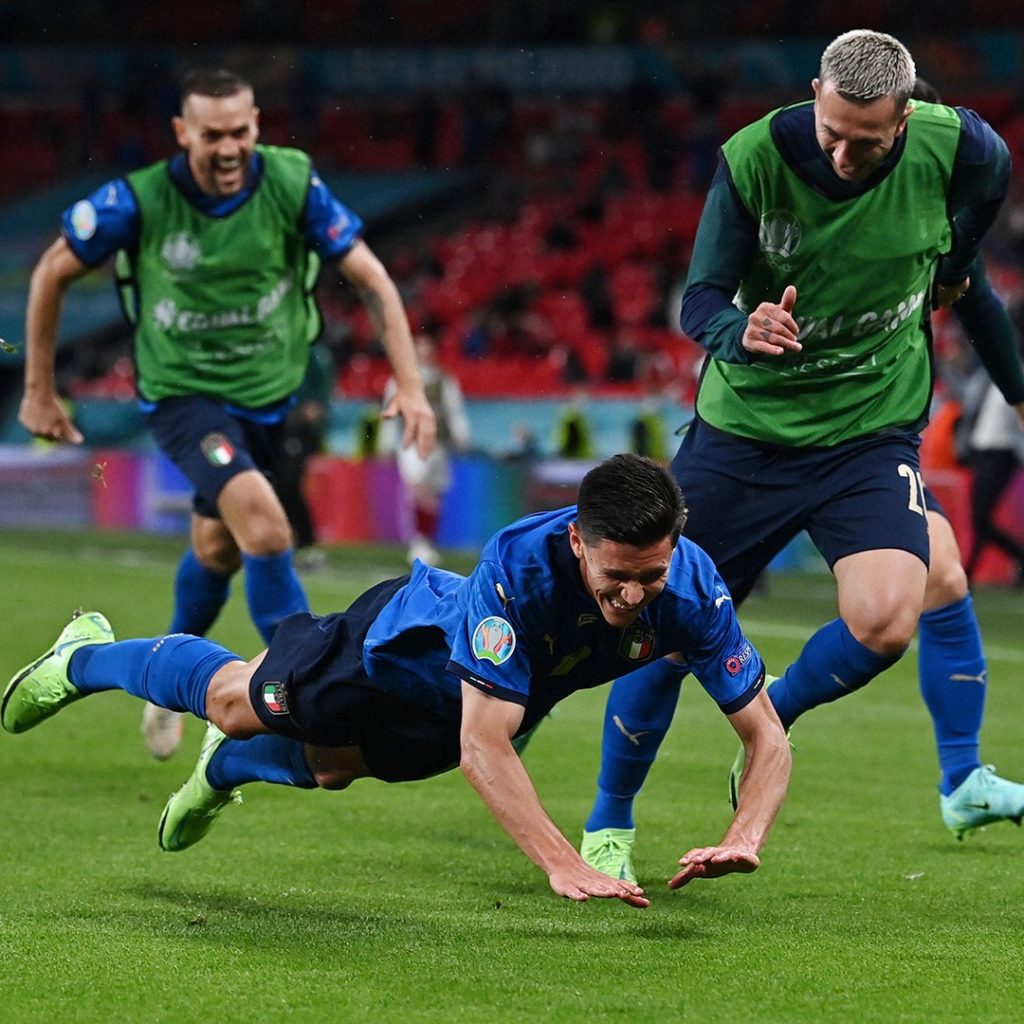 Matteo Pessina celebrating after scoring against Austria in the Round of 16 fixture at Euro 2020. (Image Courtesy: Azzurri / Twitter)

A late replacement for Stefano Sensi in the squad for Euro 2020, Pessina is certainly not starting ahead of Marco Verratti, Nicolo Barella, and Jorginho in that Italian midfield for the final against England but will have to play an important role from as a substitute, as he did in the Round of 16 and semi-final fixtures against Austria and Belgium, respectively.

Energy and positional awareness are his strengths and Roberto Mancini will hope that the Atalanta youngster will display the same quality as he did previously in the tournament.

Player of the group stages for the Azzurri, Manuel Locatelli had to give his spot for the more experienced Marco Verratti, who was unavailable at the beginning of the tournament.

He might be disappointed that he has not featured much since the knockout stages, but his talent cannot be ignored, and Mancini will know what Locatelli possesses, how, and when to use it.

Although he can be used as the one to control games from the midfield, similar to Jorginho, Locatelli has displayed the attacking side of his game in this Euro campaign with his late runs into the box after starting an attack on his own in Italy’s defensive third and this versatility can present the manager to use the Sassuolo star depending upon the match situation.

Arguably England’s best player in terms of technical ability, Jack Grealish is that kind of a player who can come on as a substitute and take the game by the scruff of its neck, as seen in the Round of 16 fixture against Germany.

He might have only featured for 22 minutes in that fixture, but he was the best player on the pitch for that period, providing an assist and playing a huge part in the build-up to the second goal.

Against Denmark too, he was tormenting the opposition defence after his substitution in the 69th minute and although he was substituted off for Kieran Trippier at the start of the second half of extra-time, he will hold no hard feelings ahead of the crunch fixture against Italy on Sunday, where he may get the chance to be the one to win England a trophy after 55 years.

While the decision not to feature Jadon Sancho from the start has been a mystery and has many eyebrows, it is paid off for manager Gareth Southgate as he sees his England side in the final of Euro 2020 without any hiccups in the process.

And the newly signed Manchester United winger might have a part to play in the final, most likely from the bench but still an important role regardless.

He showed his quality against Ukraine in the quarterfinal where the opposition defenders were swarming around the trickster and Southgate will hope that Sancho can display the same quality and have a strong impact against Italy if he comes on as the substitute in the Euro 2020 final.

Everton fans are entitled to feel sad with the number of minutes that their star forward Dominic Calvert-Lewin got in Euro 2020, but it is not his fault that England have one of, if not the absolute best strikers in world football and the captain of the side, Harry Kane.

Even though he was left out of the 23-man squad for the semi-final against Denmark, the Sheffield-born striker was cheering his side from the stands and will be hoping to get some minutes in the final against Italy.

The 24-year-old presents himself as a different type of option for Southgate, one who is quick, a great finisher with his head, and can run the channels, unlike Kane who often tends to drop deep and tries to bring in his fellow attackers into the game.

Unless England or Italy score two or three goals in the first half of the final of Euro 2020 and race away into an unassailable lead, this game is set to be defined by the performances of a substitute who can come on late in the match, given the amount of stinginess both defences have shown in this tournament.

England have kept five clean sheets out of six games in this Euros, while Italy have kept 11 in the previous 15 games and are on a 33-match unbeaten run. Sometimes a game might be decided with a moment of magic by someone on the field or from the bench, and this game calls for it.