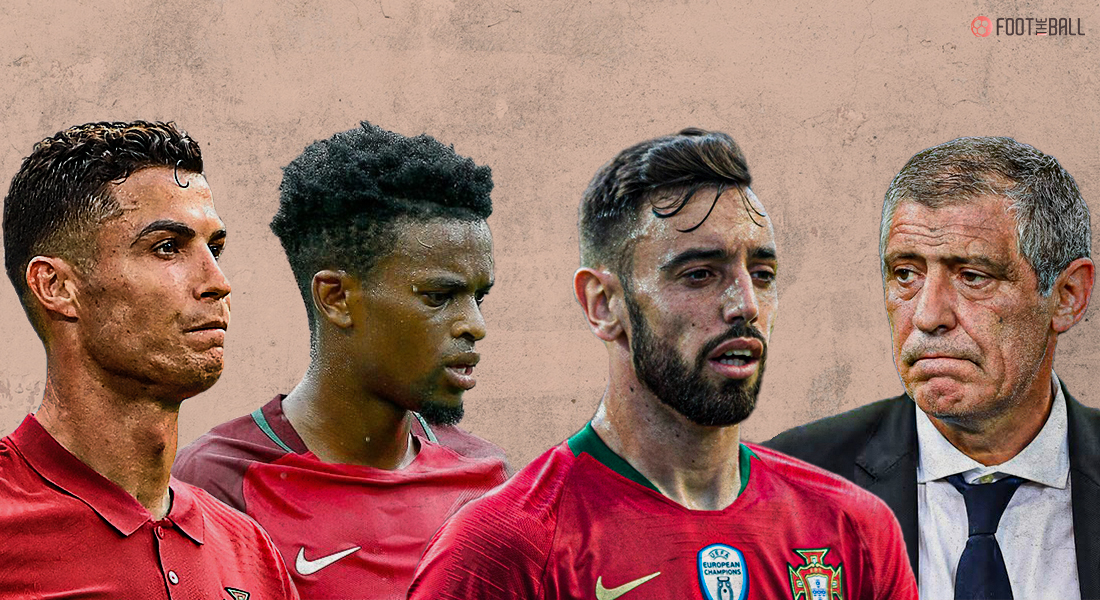 Euro 2020 has been a tournament full of surprises and we have only just crossed the round-of-16 stage. The comebacks, the never-say-die spirit, the unforgettable moments will forever be etched into footballing folklore. In that regard, Belgium meeting Portugal was considered one of the toughest ties to call.

Both teams were heavily stacked with a richness of talents and had been in a good run of form. However, odds were still on the defending champions to pull through due to their experience at this level and the number of game winners in their ranks. An insipid 1-0 defeat at the hands of the Red Devils sent the Selecao packing, assuring us of a new winner this time.

FootTheBall takes a look at what went wrong for Portugal and why their group-stage performances papered over a lot of the cracks that surfaced in their knockout tie. From a lack of creativity to a weak defence, it was not the standard that neither the team nor the manager would have expected.

TOO MUCH RELIANCE ON CRISTIANO RONALDO

The captain, the living legend, one of the two greatest players of this millennium. Ronaldo has been the shining light for his national team for a lot of years. His importance to the team cannot be overstated. So, it was no surprise that Euro 2020 saw much of the same with Ronaldo being relied upon too heavily.

On his way to becoming the joint highest scorer in international men’s football, Ronaldo literally carried the team on his back. He had five goals and one assist over four games, where Portugal as a whole managed seven goals. The fact that he had very little support despite the star names available was astonishing. Only Diogo Jota and Raphael Guerreiro found the back of the net, the latter of whom is the team’s left-back.

Portugal possessed this scary attack and only three of them made goal contributions. pic.twitter.com/1qsn5Fz8xg

Though Ronaldo still managed to script more history, the absence of his support was clearly a big miss. Portugal had been praised for being attack-heavy but that was hardly the case. Andre Silva and Joao Felix were used as substitutes, with Fernando Santos’ insistence to keep on playing Bernard Silva. Felix, meanwhile, was poor whenever he was on the pitch while Silva rarely had the service he was used to getting in the Bundesliga.

Therefore, it was no surprise that Portugal suffered so immensely while searching for goals, with three of their seven coming from penalties. Even the “great man” could only do so much for his nation. Football at its base is a team sport, a fact which was not seen in Portugal’s approach this time.

WHERE WAS BRUNO FERNANDES?

The most asked question in the aftermath of Portugal’s exit. The ineffectiveness of the Manchester United midfielder has stumped a lot of people who followed the Selecao’s games. There have been varying answers to this pressing issue. Fernandes plays his best football when he is allowed to roam in behind the front-line to create chances and play the killer passes.

In Portugal’s setup, he may have suffered from too much creative talent present in the team. Santos’ style did not give the playmaker that kind of freedom afforded at club level which hampered his production. He only started the first two group games, exiting from the thrashing against Germany in the 64th minute. After that, he only saw a further 53 minutes of action as Santos chose to start with Renato Sanches who had himself a brilliant campaign.

Top-class roaming playmaker. The Real Renato is back! 🇵🇹 pic.twitter.com/IG1Xu2T1Ul

Another problem that might have cost Fernandes his efficiency could have been fatigue. He is one of the most key players for the Red Devils and rarely misses a game. Coming on the back of a grueling, jam-packed season, it might have been that he had lost his sharpness. Santos’ midfield three relies on players doing attacking as well as defending which Fernandes had clearly failed to achieve. He looked tired when brought on and bereft of ideas as to how to best influence the game.

Against Belgium, he did put in a few crosses into the penalty but the quality of them was far lower than what is expected of him. There was no energy to his movements and he was often moving slower than natural which left Portugal without the services of one of their most in-form players.

The success of Portugal’s Euro 2016 triumph was based on a solid defensive structure that conceded only five goals. Three of those five came in a single group match which further highlights just how stingy Santos’ team were. In this edition, they let in seven goals over just four games. Four of those came against Germany, which featured two own goals.

Both of the games Portugal lost at #EURO2020 were against sides who play with wingbacks:

The holders are out. 👀 pic.twitter.com/EpICausfQF

Not only did the goals let them down, it was the manner in which they occurred. The defence looked all at sea for Kai Havertz’s third goal which was a tap-in. The same was repeated for Die Mannschaft’s fourth goal, where the entire back-line missed Robin Gosens charging into the box. Should Santos have taken heed from this? His persistence to stick with the same four players could be questioned.

Nelson Semedo was particularly poor in the German game, and gave away a soft penalty against France. Though he recovered well in that game, an injury forced him to miss the round-of-16 tie. However, it was the continued faith shown in Ruben Dias and Pepe that pleased few.

Dias was particularly lacklustre on the international stage, regularly being outmuscled or outsmarted by forward players. His club form did not translate to Portugal, and without that he seemed like a very average defender.

Pepe was his usual hard tackling, no-nonsense self but even he struggled to mark runners effectively on more than one occasion. There is a case that Jose Fonte should have featured, with the Lille captain in particularly fine form during the league season. How he would have coped is anybody’s guess but the underlying fact remains that Santos just did not take enough defenders with him.

Semedo’s injury forced him to call-up Diogo Dalot from the U-21 squad, with no Cedric Soares. The lack of fitness for exciting, teenage full-back Nuno Mendes further limited the manager’s options to change around. This all compelled the Selecao to stick with the same defence for all four matches, bar the last one.

WHAT NEXT FOR PORTUGAL?

Portugal entered the tournament as one of the favourites to win, especially given their depth in attack. However, their campaign was anything but straightforward as they struggled to find the goals required to progress. A lack of defensive strength and ineptitude shown by some of their big players conspired to knock the Selecao out prematurely.

Santos is widely expected to carry on, with the 2022 World Cup around the corner. Ronaldo will once again be leading the charge, hopefully with more help as the World Cup qualifiers get underway once again later this year.