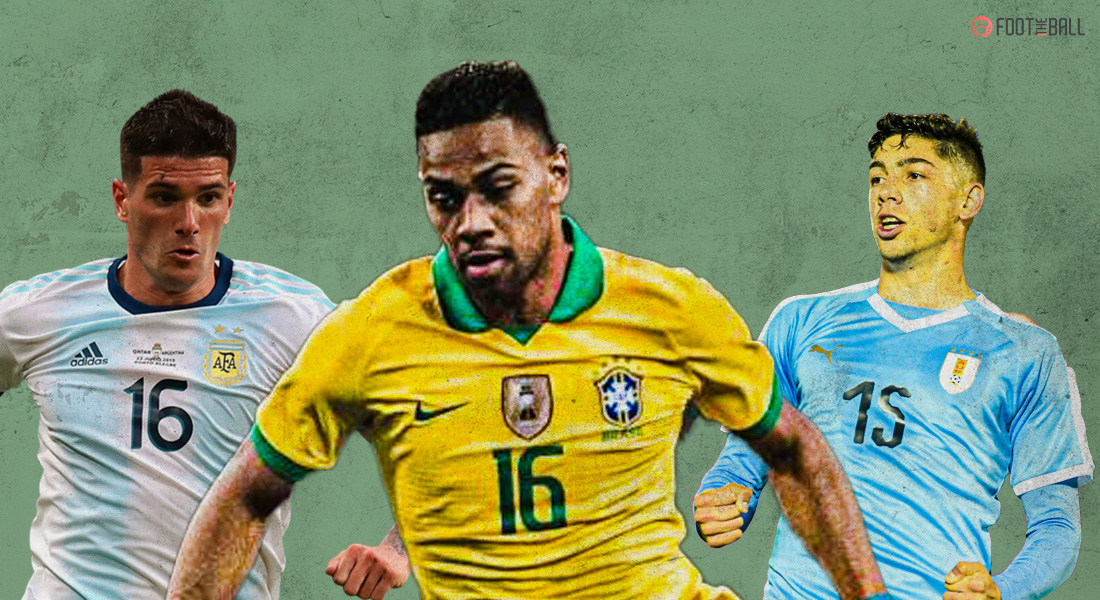 Amidst the concerns and mix-ups leading up to Copa America, we can still expect a rather exciting competition. There are already many well-established names vying to prove themselves as the tournament closes into its start. Many talents are waiting to pounce on the opportunity that may fall their way. Let’s take a look at the ten players that will star at Copa America 2021.

A goal and two assists in just eleven starts in La Liga. The left-back has been a constant impact from the bench and is a promising talent. Capable of playing across any position in the left channel, the young Brazilian is a viable attacking option and steady defensive cover. Much like his Selecao predecessor Marcelo, Lodi likes to take on opponents with the ball at his feet.

The wing-back is comfortable with the ball at his feet and the 83 per pass competition he had in La Liga this season backs the claim. He is often found higher up the field, assisting the offence on the left flank. He likes to engage in 1v1 duels and is often found lunging into tackles. Of the 39 tackles he attempted in the league, he has successfully won the ball on 30 occasions.

The 23-year-old has much to learn despite his impressive performances and is sure to take his career to the next level. The upcoming Copa America might well prove to be the ideal venue for the young wing-back to make a stronger claim about his abilities. Be sure to keep an eye on this talented Brazilian as he can become a star full at the Copa America.

Despite being just 22 years of age, this young man has become a staple name in the vastly talented Real Madrid midfield line. He has made 15 starts for the club in the league this season, with a further nine appearances as a substitute. Playing alongside world-renowned players like Toni Kroos, Luka Modric and Casemiro has surely helped in the development of the Uruguay international.

Although he hasn’t found the net, he was instrumental in the midfield, winning back possession and turning attack into defence. He has an affinity for long-range efforts and is exceptional at finding his teammates. An astounding 89 per cent pass accuracy showcases the ball-playing technical ability of the player. The Uruguay international is a valuable addition to the national side and the fans will be hopeful that the Madrid midfielder will show his star quality come the Copa America.

The young forward netted six times for the Los Blancos outfit this season. He also provided four assists this season and started on 30 occasions. The Brazilian is just 20 years old and has already started to make an impact in one of the biggest clubs in the world. Although he hasn’t reached the level to fill the void left by Ronaldo in either Madrid or Brazil, he does show promise.

With proper guidance and a bit of luck, many claims that this extremely talented player will likely be one of the biggest names in world football. He has stiff competition in his national team, but there is a likely chance that he features in some of the games for Brazil. A promising talent that is waiting to pounce on new opportunities to take his career to the next level.

The Fiorentina defender is in his mid-20’s and is approaching the prime age for a central defender. He has been a vital part of the defence this season and has made an average of 21 appearances. Although his tackle success ratio is only a tad above the 50 per cent mark, the overall ability of the defender cannot be deduced from the stat alone.

The central defender is comfortable on the ball and attempts close to 50 passes per game with a success rate of 80 per cent. He is also capable of reading the game well and averages three interceptions per ninety. The World Cup qualifying matches have proven to be a crucial testing ground for the defender and he is expected to keep his place in the starting eleven. Exemplary performance in the Copa America may warrant him a move away from his current club to a much more attractive location that will accommodate the young star.

The 25-year-old Peruvian midfielder started 32 matches for Celta Vigo in La Liga this season. In a high-stake attacking Celta Vigo unit, a player like Tapia was crucial. His presence in midfield, eating up any danger that probed the isolated defence of the Spanish club was crucial to their finish in the top half of the table.

Tapia constantly presses the ball when his team are out of possession, attempting almost 20 pressing actions per game. He is particularly exceptional in winning the ball in the air and clearing it when danger lurks. Tapia is crucial to the Peru team and will expect the defensive midfielder to play a broader role than the one he plays for his club outfit.

In Argentina’s recent fixture against Chile in the World Cup Qualifying match, they lined up in a 4-2-2-2 formation. A rather odd formation that focused on a central structure with the old fashioned two-man striker. Perhaps in an attempt to include Lionel Messi and the inform Inter Milan forward Lautaro Martinez.

Martinez is just twenty-three years old and has started to earn a reputation as one of the most prolific strikers in Europe. His 23 goal and assist contribution was vital in Inter Milan’s Serie A title haul. Martinez has simply been exceptional this season. He has scored more than five goals in situations that seemed almost impossible to find the net. His xG markers in those particular situations also point to the same conclusion.
This time, it can be said that Lionel Messi may have the luxury to depend on his co-striker rather than having to win the game all on his own. Martinez is bound to make a big-money move if he can keep his form intact. How impressive will he be this Copa?

A physically imposing striker, Alfredo Morelos has been a vital figure in Ranger’s success this season. An incredible season for the Columbian who came off the bench several times to impact the game. Rangers boss Steven Gerard had even dubbed the player as the Ranger’s Suarez at a point in the campaign.

Morales scored 17 times in the season and assisted on 13 occasions as the Rangers secured the Scottish Premiership with a whopping 102 points. The Columbian forward line is filled with names that lay a claim for the starting position. Although it might be unrealistic to expect Morelos to start every game, he is sure to be part of the time at some point in the campaign. A continental success will surely boost his hopes and may well launch his career into a different dimension.

The tall Juventus midfielder is just 23 years of age and has already established himself at the Old Lady. He made 27 starts this season in Serie A and assisted four times in the campaign. The midfielder boasts a pass accuracy of nearly 90 per cent and is a welcome presence in the midfield. He is capable of a wide range of passes and one-third of his crosses usually find his teammates.

✍️OFFICIAL⎮ Rodrigo #Bentancur has extended his stay with Juventus until 2024! ⚫⚪

Bentancur is an exceptional passer and is calm and collected when on the ball. He is also adept at the defensive ways of Italian football and adds a layer of protection to the Juventus defence. The young midfielder is likely to be a usual starter for the Uruguay national team this summer and his star quality in midfield will definitely come in handy for the national side at the Copa America.

The midfielder was a key instigator in Fiorentina this season and made 31 appearances for the club in the domestic league. Although he scored just one goal and has only 3 assists to his name, he was instrumental in the team. Like many others on this list, Pulgar also boasts a decent passing stat with an accuracy of 85 per cent.

His height helps in the air and makes him a dangerous player in set-piece situations. The player is also well equipped to take set-pieces and likes to take on long-range efforts. The player has the good technical ability and is equipped to carry the ball if he is out of passing options. La Roja will be keen on using the services of the midfielder. A continental success may well attract bigger teams for the Serie A midfielder.

The Argentine national is a versatile player who can play across an array of positions in the midfield line. An extremely useful resource for the La Albiceleste. The Udinese midfielder started 36 matches for the club and scored nine goals during the time.

The midfielder will be of prime importance for the national side and is likely to be deployed in the area just in front of the defence. Paul will be responsible for preventing threats and starting attacks from the backline. With plenty of renowned players in front of him, the midfielder could be expected to pick up assists this summer.

Rodrigo de Paul: Has made more accurate through balls (11) than any other player since the start of the 2018/19 Serie A season

The defender should be wary of his defensive temperament and will try to avoid unnecessary tackles. It will be an interesting watch to see how the Udinese star performs at the Copa Ameirca