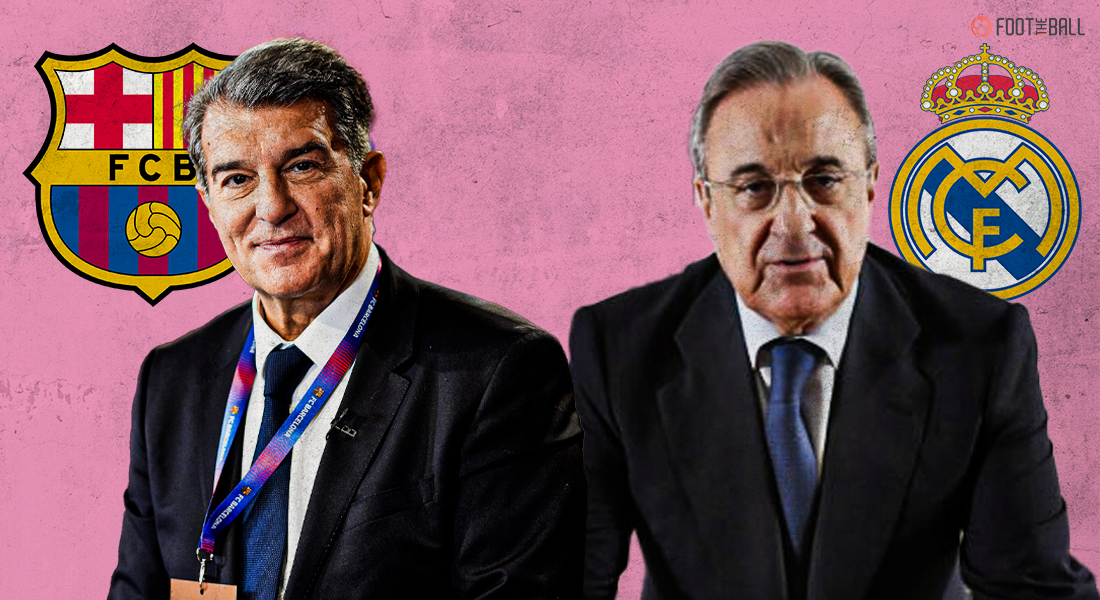 The titans of Spain are recovering from a wound that has no bandage. Barcelona and Real Madrid have been battling the storms of financial trouble affecting the two Spanish giants quite miserably.

While the Blaugrana are putting each piece of the puzzle one by one, Los Blanco’s glass-fountain has already come tumbling down. Josep Bartomeu left Barcelona in deep-waters and since Joan Laporta’s appointment, the situation seemed to improve.

A handful of low-cost signings helped Barcelona fill all the loopholes and the situation seemed to be taking a u-turn. Unfortunately, Barcelona can not register any of these signings due to La Liga’s regulations.

Florentino Perez and Real Madrid have been struggling financially as well. Los Blanco’s left Sergio Ramos hanging dry who had to find a home in Paris. None of the players was prepared for a salary cut while Perez’s Mbappe plans made him the villain in Madrid.

Barcelona—along with their big competitors in European professional soccer under jeopardy. The soccer business, which escaped the global financial crisis of 2008, is now at the forefront of a possibly deep worldwide slump. It’s being pounded by a less-than-ideal thunderstorm. As per a source in La Vanguardia, Barcelona has already lost €154 million worth owing to the covid outbreak.

Several revenue sources have reduced to a crawl or have frozen up for the remaining time putting Barca’s operations under tremendous problems.

Barca’s museum, which garnered the team €58 million the year before, has been closed since Spain’s authorities imposed a closure. The Catalan teams’ shops in the town have also been closed, notably, the one that debuted last year along La Rambla, the town’s iconic avenue.

❗Memphis Depay lowered his salary by 30% to be able to sign for Barcelona.

• Barça initially offered him €7m/year plus bonuses but he ended up accepting €5m/year owing to the financial difficulties of the club.#FCB 🇳🇱

The story didn’t finish here, Barcelona and Real Madrid both entered a contract questioning the Spanish giant’s authority in the world. The undisputed and unfortunate monetary situation in Spain forced Perez and Laporta to join hands and establish the league with Real Madrid and Florentino Perez being at the heart of the breakaway league.

Barcelona’s released statements showed how the clubs were inching closer to bankruptcy. Failing to register their new transfers due to La Liga’s rules, A debt of around $1.4 billion, and the salary and monetary collapse has destroyed the club’s fortunes.

Florentino Perez to El Chiringuito: "Here at Real Madrid we've lost a lot of money, we are all going through a very bad situation. When there is no profit, the only way is to play more competitive games during the week. The #SuperLeague will save the clubs financially". 🚨

The 2 Spanish giants have been two of the most consistent business entities when it comes to shopping in the summer window but the financial trouble for the two teams seems endless. A world-class and young striker called Cristiano Ronaldo for just 90 million dollars would seem no less than a bargain in today’s world. While the two teams have been excellent sweeping players, Barcelona and Real Madrid have recently been darting on the wrong road.

The Blaugrana after failing against Roma three years back pressed the panic button. First Ousmane Dembele was signed by Borussia Dortmund for a whopping sum of 105 million euros plus a 40 million euro add ons. Phillipe Coutinho knocked on Camp Nou’s door and a seat was booked for the Liverpool winger. But both of these big-money moves failed to land Barcelona with the required results.

A Champions League trophy hasn’t travelled to Barcelona for ages while winning the La Liga seems like a daunting task for Ronald Koeman’s army. Josep Bartomeu, the ex-president of the Catalans forgot to play the administration game properly. A too-old Luis Suarez was sold to rivals for a meager amount, Arturo Vidal was shown the exit door although his deal wasn’t financially sound, and the deadwood wasn’t cleared off from the Catalan capital.

The result was Barca had to pay off salaries to players who were a burden to the roster putting them in financial jeopardy. Take the example of Miralem Pjanic, the 31-year-old who entered Barcelona after a swap-deal with Juventus for an enormous price. And for someone who has a huge price tag, Barcelona’s fans expected Pjanic to be running the circus from the middle. Instead, Pjanic played the full 90 minutes in La Liga just once throughout his 19 appearances. A failed move perhaps, Pjanic’s example is just one of many transfers that Barcelona’s board have faltered in and that has cost the Spanish giants a fortune. The fact that Lionel Messi is still a free agent at the club after being the club’s longest servant elaborates on Barcelona’s financial troubles.

Now it’s time to switch to the condition at Santiago Bernabeu and see how Florentino Perez is managing his formidable Spanish club. The rightful owners of the Champions League, Real Madrid’s dominance in the European competition continued in the recent decades as well. But after Cristiano Ronaldo’s departure to the Old Lady, the Spanish Kings faced difficult challenges from Prince’s across Europe. Zinedine Zidane, the predecessor of Carlo Ancelloti, had an intimidating dare lying in front of him after Los Blancos decided to refrain from shopping in the transfer market. The white’s stocks touched the floor as Perez and Zidane had to function with the scraps.

Talented youngsters like Sergio Regullion, Oscar Rodriguez, and Achraf Hakimi were shipped across Europe. Regullion impressed the world with his Premier League outings and Hakimi conquered Italy with Inter. James Rodriguez, a long-term servant at the club, packed his bags to unite with Ancelotti at Everton. Gareth Bale, a world-class prospect was given a year in the Premier League to prove his worth to Zidane.

A lot of pundits believed Perez didn’t splash out money this summer so that he could land in one of Kylian Mbappe or Erling Haaland. The Eden Hazard card-trick miserably failed as Los Blanco’s talismanic striker and star summer signing spent most of his time in the hospital rather than on the pitch. Hazard’s Spanish expedition was clouded by injuries as Chelsea’s veteran became Madrid’s baggage in no time.

Sergio Ramos’ departure worsened the scenario at Bernabeu as the team’s unity has been thrown out of the window and the reconstruction under Ancelotti will need a large number of effort from the Italian headmaster.

Try asking a random fan on the street who his favourite football player is and 9 out of 10 people’s lips will scream Lionel Messi or Cristiano Ronaldo. A rivalry for the ages, the talismanic couple kept us glued to the television sets for 90 minutes.

LaLiga possessed two names with whom they could challenge any European League. Premier League’s financial or broadcasting dominance if the Spanish league would have placed a blueprint for the future.

Lionel Messi is currently a free agent. His salary might be a tad costly, but he’s half decent and might be worth a punt.

But they forgot to capitalise on the colossal assets as one of them left for Italy while the other one refuses to put pen to paper at his current club. Lionel Messi is a free agent with a new rumour about his future appearing every morning. While a deteriorating situation at Los Blancos and unprofessional Spanish supporters saw Cristiano Ronaldo depart for Juventus.

La Liga could have earned the perfect head start against the Premier League when the two titans featured in Spain. But the lack of planning meant it wasn’t possible. While Ronaldo’s absence tormented LaLiga’s viewership, suggestions coming out of Spain have indicated that Messi’s departure could see the Spanish league fall like a deck of cards adding more misery to the already existing financial trouble for the Spanish giants.

With the misery increasing with each passing day, Barcelona and LaLiga have to ensure Messi signs a new contract with the Catalans otherwise the league’s future will be hanging by a thin thread.