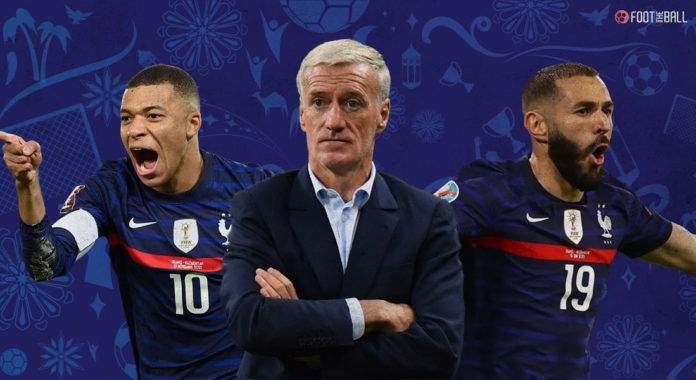 With the 2022 FIFA World Cup in Qatar just days away, the nation is starting to announce their squads. The latest country to name their team for the tournament is defending champions France. Didier Deschamps announced a 25-person squad which is stacked with talent. The French will be aiming to be the first team since Brazil in 1962 to win consecutive World Cup titles.

Furthermore, since 2010 every defending champion has been knocked out in the first round, and Deschamps will be hoping to buck the trend. So, who has made the cut for France’s World Cup squad and who has missed out?

Socceroos on their way

The primary worry for France at the 2022 World Cup will be the unavailability of Paul Pogba and N’Golo Kante. Both players were instrumental in their World Cup win in 2018 but are currently injured, which means Deschamps will need brilliant performances from his other midfielders.

In goal, Deschamps has opted for Tottenham’s Hugo Lloris, West Ham’s Alphonse Areola, and Rennes’ Steve Mandanda. The significant omission is Leeds’ Illan Meslier, who will be feeling hard done by. Lloris will be the starting goalkeeper and captain for the side.

While France has an abundance of talent, it is the defence where they have world-class players across the pitch. Bayern Munich’s Lucas Hernandez, Dayot Upamecano, and Benjamin Pavard, AC Milan’s Theo Hernandez, PSG’s Presnel Kimpembe, Liverpool’s Ibrahima Konate, Barcelona’s Jules Kounde, Arsenal’s William Saliba, and Manchester United’s Raphael Varane have made the cut. One of the major omission in defence is Real Madrid’s Ferland Mendy

Lucas Hernandez and Benjamin Pavard are sure starters at left-back and right-back, respectively. However, the centre-backs slot are up for grabs, with Kimpembe, Upamecano, Konate, Kounde, and Saliba fighting for the starting role.

Deschamps has sprung a surprise in midfield by naming Marseille’s Matteo Guendouzi and Jordan Veretout to the squad. However, due to the absence of Pogba and Kante, there will be pressure on the Real Madrid duo of Aurelien Tchouameni and Eduardo Camavinga to control the tempo in the middle of the park. The final two spots have gone to AS Monaco’s Youssouf Fofana and Juventus’ Adrien Rabiot.

The attack, like the defence, is stacked with world-class talent. The biggest news will be the return of Karim Benzema to the national squad, who will form a dangerous triumvirate with Antoine Griezmann and Kylian Mbappe. They also have a brilliant support cast in Bayern Munich’s Kingsley Coman, RB Leipzig’s Christopher Nkunku, Barcelona’s Ousmane Dembele, and AC Milan’s Olivier Giroud.

BREAKING: Giroud has been included in France’s World Cup squad. It will be Giroud’s THIRD World Cup.

Against the odds, Giroud stayed silent, worked hard & has 13 G/A for Milan this season.

Key players to watch out for

The PSG star striker had a brilliant World Cup four years back as he helped France to their second title. Mbappe scored four goals in Russia, including one in the final and won the Young Player of the Year. And this time, he will have even more responsibility if France are to bring home the cup this year.

The Frenchman has been brilliant at PSG but wants to play on the left wing, an opportunity he will definitely get at the World Cup with the inclusion of Benzema in the squad. Because of the absence of Kante and Pogba, the midfield is inexperienced, and thus the attack needs to be at their best to alleviate the pressure in the middle of the park.

Best player in the best tournament: The history of FIFA Golden Ball and its winners

Since the 2014 FIFA World Cup, Karim Benzema has not been a part of any international tournament. However, that has changed in Qatar as the FIFA Ballon d’Or winner has been called up. His inclusion has significantly improved France’s chances of retaining the title. The Frenchman has been imperious as he helped Real Madrid win La Liga UEFA Champions League.

He will also bring the winners mentality to the squad, which France will consider many talented teams.

There will be huge expectations from Aurelien Tchouameni as he will be expected to negate the absence of Kante. He will also be the leader in the midfield and thus will have to perform to his best. Opposition teams will know that their midfield is the least experienced and will look to execute the press in the middle of the park. Here, he will need the orchestrator-in-chief- to ensure France can counter the press.

🚨 Aurélien Tchouaméni & Eduardo Camavinga are Going to Replace The Star Duo of Pogba & Kante for France in The 2022 Fifa World Cup. 🇫🇷🌟😍

Eduardo Camavinga has been slow to start his career at Real Madrid but is slowly beginning to establish himself in the team. With Toni Kross not getting any younger, top things are expected of him, and a good showing at the World Cup will go a long way in helping him. Camavinga is also dynamic and offers far more skills than Adrien Rabiot and Matteo Guendouzi.

And just like Tchouameni, he will need to be at his best to ensure France are not pressed in their half.

It is hard to find a hidden gem in the French squad as almost every player is well-known in football. However, one of the players performing brilliantly is AS Monaco’s Youssouf Fofana. The 23-year-old midfielder has got his chance after Pogba and Kante’s injuries. And while he may not be an automatic starter, he will get minutes and will get his chances to showcase his talent.

One of the records that France can break is defending the title, which will make them the third nation after Italy and Brazil. They will also be looking to qualify for the next round ending the trend that started with Italy in 2010. Manager Didier Deschampscan will become only the second manager after Vittorio Pozzo to win back-to-back World Cup titles if he goes all the way in Qatar.

Despite missing Pogba and Kante, France have one of Qatar’s most formidable squads. On their day, it will be hard for any team to stop them. They have brilliant defenders, young midfielders, and world-class attackers. However, Hugo Lloris has a habit of making blunders (remember the 2018 FIFA World Cup). With England, Spain, Belgium, Brazil, Argentina, and a resurgent Germany coming in good form combined with the pressure of being a defending champion will be too much for them to handle.