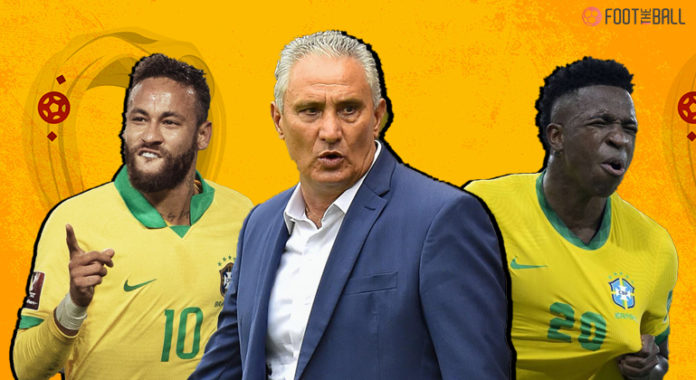 Brazil reached the 2022 World Cup after staying undefeated in their brilliant qualifying campaign. One of the title contenders, Brazil national team, will play their matches in Qatar, which will be watched by millions of fans around the world.

While Brazil has lost only to Argentina in its last 29 matches, it has played only one European team since the 2018 World Cup. Defence is possibly where Brazil appears a little susceptible on paper and where it could be vulnerable. Known for their expansive attacking style of football and high defensive line, Brazil’s defence will be tested against quality teams with balls over the top and runs in behind them.

Ranked first in the FIFA world ranking and with no clear in-form European favourite, all of the stars seem to be lining up for Brazil in Qatar. Now is the time for the Selecao to add a sixth title to their all-time World Cup trophy count. Brazil last won the trophy in 2002, and if it doesn’t win in Qatar, the country will match its longest World Cup drought by the time the 2026 World Cup begins.

Ederson or Alisson? The competition for Brazil’s starting lineup starts between the posts, where Tite has two of the best Premier League keepers at his disposal.

The Brazil boss has shown he would’ve started both of them if he could have. However, he has mainly used Alisson as his first-choice keeper recently. The Liverpool star split duties with Ederson during the qualifying tournament. However, Tite has given Alisson eight more starts since then. As of now, Alisson has a higher chance of staying as Brazil’s No.1. But Liverpool’s poor start to the new season might put the 29-year-old’s lineup chances in danger.

When it comes to the men in front of Alisson, Tite has very few world-class options, particularly in the fullback positions. The left-back spot will be a tight competition between Alex Telles and Alex Sandro, with Alex Telles probably getting the edge over his Brazilian counterpart. In centre-back, veteran Thiago Silva will be a rotating option with Eder Militao, alongside the ever-reliable Marquinhos.

Midfield is where the actual conundrum starts for Tite. Casemiro is bang on to start every match as long as he’s fit to play. Alongside the new Manchester United signing from Real Madrid, it is a battle for the ages. Tite has a host of players to pick from the likes of Fabinho, Fred, Bruno Guimaraes and Lucas Paqueta. It has been well known that Fred is a favourite of his manager Tite, and with Fabinho out of form, it is an open race. Newcastle United’s Bruno Guimaraes looks like the front-runner to partner Casemiro in midfield with Paqueta making impactful substitute appearances from the bench.

In the attacking third, options get as exciting as they could get for the Brazilian fans. Neymar will most likely be deployed in a much more central role behind the lone striker. Vinicius has already cemented his place on the left-wing and Gabriel Jesus’ form for Arsenal suggests that he will be Selecao’s first-choice striker as well. It is on the right wing where the battle gets interesting. Raphinha will get the nod ahead of Manchester United’s summer signing Antony, although any sign of a dip in form for the Barcelona summer recruitment and Antony will leave no opportunity to pounce on that chance.

Key players to watch out for

Of course, it had to be the PSG magician. The Brazilian star might have had a somewhat drop in his career since his move to Paris from Barcelona, but that does not change the fact that he is the nation’s second-highest goalscorer.

Neymar will be key to Brazil’s success at the World Cup in Qatar and any sort of absence of him from the starting lineup, might massively impact their chances at winning the showpiece event of 2022.

No doubt over here. Vinicius had quite a slow start at Real Madrid under Zidane, but ever since Ancelotti arrived at the Spanish capital, his career has taken off. He alongside Karim Benzema, have been the real deal for Carlo Ancelotti’s team and together the duo had more than 100 goal contributions amongst them in the 2021-22 season.

Pedro Guilherme Abreu dos Santos, better known as Pedro for the Brazilian national team has been surprisingly called up by Tite in the final 26-man-squad at Qatar.

The 25-year-old’s inclusion in the squad has surprised many and fans will no doubt be wondering what he will bring to this team – the player who has been selected ahead of a fan favourite – Gabriel Barbosa or Gabigol. Pedro has 23 goals in 33 appearances in the year 2022 and his ruthlessness in front of the goal helped him in his aide to make it to the final squad.

Brazil and Tite do have quality all over the field to select from, except for the fullback positions. Both left-back and right-back positions lack quality and that could prove to be their ultimate undoing at the 2022 Qatar World Cup.

With their winger not fondly known for their ability to track back and help their defenders, it hardly helps Brazil’s fullbacks. While the Selecao still look like one of the strongest teams on paper, it is difficult to predict them winning it all in the end. FootTheBall predicts a semi-final exit for Tite’s men and finishing in 3rd place.

The comforts of home