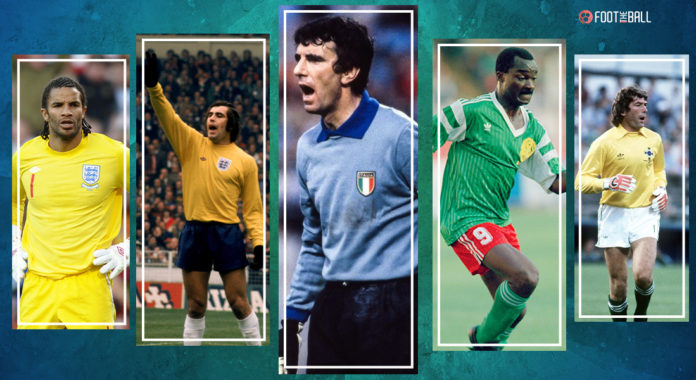 A ravishingly fast and physical sport like football won’t let take any breaks. If you’re standing still, you might as well find a bed and nap. Goes without saying that you will be, more often than not, richly penalised for your lack of movement and action. Stamina, speed, and endurance are the game’s platinum currency.

If we indulge in lazy thinking, it’s easy to conclude that elite, professional football is a world that only incorporates the energy of youth. However, that is exactly what we are not going to do. The history of the sport shows that there have been countless players who have consistently rebelled against their mortality and empowered the cliche that says ‘age is just a number’, and Betway Insider are a few of those who agree with this.

FootTheBall lists down the 10 oldest men’s footballers who represented their country at the grandest stage.

On June 25, 2018, Essam El-Hadary did something quite remarkable. In Egypt’s final group game against Saudi Arabia, El-Hadary became the oldest player to play (and debut!) in a men’s FIFA World Cup at the age of 45 years and 161 days. The same day, he also let his gloves talk when he became the first African goalie to stop a penalty in a World Cup finals match.

In the men’s 2014 FIFA World Cup in Brazil, with Colombia’s qualification to the Round of 16 confirmed, the then-Los Cafeteros gaffer, José Pékerman gave his second-choice goalkeeper, Faryd Mondragón, a belated birthday gift by subbing him on in the dying moments of their final group game against Japan, making him the then-oldest men’s player to feature in a World Cup finals game.

Having also represented Columbia in the 1998 France World Cup, Mondragón’s next appearance versus Japan came after a gap of 15 years and 363 days, making that the longest time wait time for a men’s player to make two World Cup appearances.

Third in the all-time list, Roger Milla happens to be the oldest striker to play in a men’s FIFA World Cup.

Before Mondragón, Milla was first on this list and he reached there by playing against Russia on June 12, 1994, at the age of 42 years and 39 days. In that game, he also scored his first World Cup finals goal but understandably his thunder was stolen by Russia’s Oleg Salenko who netted five goals, as Russia drubbed Cameroon 6-1.

Another goalie, and another birthday present!

On his 41st birthday, i.e., June 12, 1986, Northern Ireland’s shot-stopper, Pat Jennings, became the then-oldest men’s player to represent any team in a World Cup finals game. It wasn’t the best-ever outing for Northern Ireland as they encountered the might of Brazil who put the ball in Jennings’ goal thrice.

With over 1000 appearances in total – 119 of them being for Northern Ireland (second-most for the nation) – Jennings enjoyed an exalted career.

Infamously known for being the recipient of Diego Maradona’s “Hand of God” goal in the 1986 Mexico World Cup, the English goalkeeper is the fifth oldest men’s footballer to feature in a World Cup finals game.

He achieved this feat in 1990, courtesy of his 125th and final international appearance, which was against Italy in the third-place playoff. However, all was not rosy for Shilton that day as he committed a fatal error which culminated with the Azzuri edging past the Three Lions.

Italy triumphed over West Germany 3-1 to claim the biggest prize in Spain in 1982. The then-40-year-old Zoff, who’s considered the one of best men’s goalkeepers of all time, was also elected the goalkeeper of the tournament.

In the men’s 2006 FIFA World Cup in Germany, Tunisia’s Ali Boumnijel, who featured in all three group-stage games for the Tunisians, was the oldest player to set onto the field in the tournament.

He was also his country’s first-choice goalie when the Eagles of Carthage claimed their one and only African Cup of Nations title in 2004. Boumnijel, who works as a coach now, went on to don the colours of the country 51 times.

Part of four World Cup squads for Scotland, Jim Leighton’s appearance in the men’s 1998 World Cup in France makes him the eighth oldest footballer to play on this platform.

Behind Kenny Dalglish, Leighton is the second-most capped Scottsman, guarding the Tartan Army’s goal on 91 occasions. Quite unfortunately, Leighton and his national team hold the unwanted record of failing to make out of the group stage at a World Cup more times than any other country (8).

The eighth goalkeeper on the list, David James, got his place here when he was named in the English playing which took on, and tragically lost 4-1, to Germany. It was the Three Lions’ heaviest defeat in a men’s World Cup finals fixture.

Interestingly, in the latter stage of his career, James also played for the Indian outfit, Kerela Blasters FC, in the Indian Super League. Later on, he endured an unsuccessful coaching stint at the same club.

The last in line, but we finally have another outfield player who makes the list. Labruna represented the Albicelestes 37 times, including at the 1958 World Cup in Sweden, where he attained this accomplishment at the age of 39.

Born in 1918 in Buenos Aires, Argentina, Labruna was one of the best players of his generation and completed River Plate’s offensive line, known as La Máquina, or the Machine with his presence. With over 320 official goals, he’s viewed as Primera División’s all-time second-highest goal-getter.