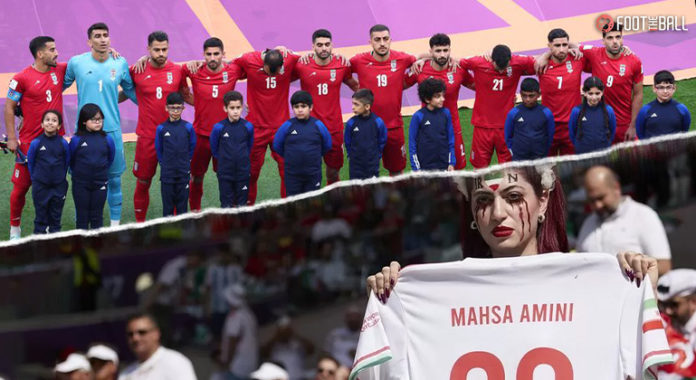 Protests in Iran – which erupted in the aftermath of 22-year-old Mahsa Amini’s custodial death in September for allegedly not properly adhering to the hair-covering rules – have consumed the streets of the nation and present the biggest challenge to the ruling regime in its 43-year history. According to Iranian Human Rights (IHR), at least 488 dissenters have been killed in the security forces’ crackdown on the protests.

Football is the country’s beloved sport, and considering the gravity of the situation in Iran, it was impossible for the sport to remain unruffled and evade the Iranian political landscape. Understandably, given their large platforms and influence, players as individuals and the national team as a unit had been under immense pressure from different sections of society to get authentically involved in the situation.

Leading up to the world cup, there were apprehensions, from either side, regarding the impact the national team’s campaign might end up making in Iranian society.

Open Stadiums, a human rights group that is seeking an end to gender-based discrimination in Iranian football and a right for Iranian women to enter stadiums as spectators, addressed ​​FIFA president Gianni Infantino through an open letter, demanding Iran’s expulsion from the world cup. Calling the Iranian FA “an accomplice of the crimes of the regime,” they rhetorically asked: “Why would FIFA give the Iranian state and its representative a global stage…?”

As Iranian football fans, with heavy heart we asked FIFA, due to ongoing human rights violation based on Articles 3-4 of its statutes, immediately expel Iran from #Qatar2022 Worldcup.

On the other hand, people like the former Iranian coach, Afshin Ghoti believed that laden with the anxiety of possible anti-government protests on an enormous platform, the government perhaps might have wanted to withdraw the team themselves, according to The Athletic.

How did footballers respond, leading up to the world cup?

The boldest and most explicit response came from the country’s prolific striker, Sardar Azmoun, who plays his club football at Bayer Leverkusen currently. After the friendly game against Uruguay in September, Azmoun posted a story on Instagram, where he had around 5 million followers at the time, that said:  “Because of the restrictive laws placed on us in the national team I am not supposed to speak out… I know I risk being sent home, but I can’t take it anymore! You will never be able to erase this from your conscience. Shame on you! You kill easily. Long live Iranian women!”

Later on, he also posted that the players were being averted from expressing their solidarity with the protesters. However, the forward ended up issuing an apology for the same. According to some rumours, despite having scored 41 goals in just 65 games for Team Melli at the time, Azmoun’s actions had put his selection in the final world squad in doubt.

Following the Uruguay game, Iran squared off against Senegal in Vienna in another friendly fixture, and the Iranians walked out in black jerseys hiding their badges and emblems as the national anthem played out in a game that was being played behind closed doors. Despite that, voices from fan protests outside the stadium muffled in, and the game was reportedly broadcasted on mute by Iranian State TV.

However, lately, the national team also faced heavy criticism for meeting the Iranian president, Ebrahim Raisi, before flying out to Qatar to start their campaign.

Even in club football, players have been galvanised by the protests. Esteghlal FC players, after winning the Super Cup in early November, decided against celebrating their victory and partook in the post-match ceremonies only after ensuring that there would be no music played or fireworks shot. These images also were reportedly censored on State TV.

Former players such as Ali Karimi and Ali Daei have also been outspoken in their criticism of the regime and support for those protesting. “I prefer to be next to you in my homeland and express my sympathy with all the families who lost loved ones over these days,” Daei wrote on his Instagram page, declaring that he won’t be travelling to Qatar for the FIFA World Cup.

Saeed Piramoon, playing in the Beach Soccer Intercontinental Cup in Dubai, also registered his protest when he scored a goal and celebrated by mimicking cutting his hair, a gesture that has become a symbol of resistance among Irani protesters.

Saeed Piramoon reenacted the "cutting of hair" to celebrate his winning goal in the final of the Emirates Beach Soccer International Cup to support Iranian women who are forced to wear the hijab. The regime eventually forced him to apologize. #SayTheirNames #WALIRN #Qatar2022 pic.twitter.com/2rmMcGZq7g

What happened at the world cup?

There were comments before the first game versus England such as Alireza Jahanbakhsh suggesting that the English journalists were deliberately asking protest-related questions to disrupt the stability of the Iranian team but when the day arrived, Team Melli chose to sympathise with the protesters at home by not singing the national anthem. The goal celebrations, albeit in a 6-2 defeat to England, were muted. The footage of the national team not singing the anthem as well as the radical, anti-regime chants of fans present in the stadium was censored during the broadcast on Iran’s state television TV.

Before the game, the Iran manager Carlos Queiroz had reiterated that his players were “free to protest as they would if they were from any other country”. Later on, as the tournament progressed, Queiroz maintained the importance of press freedom but also questioned the reluctance of western journalists to challenge managers of western nations over issues of hard politics.

In games two and three, Team Melli, in a seemingly half-hearted manner, did sing the national anthem. Some reports suggested that the pressure to comply was mounting on the team from Iranian politicians. Voria Ghafouri, a famous footballer and a defender of Iranian Kurds, was also detained, on the eve of the Wales game, by Iranian security forces for allegedly spreading propaganda against the state and undermining the national team.

However, the presence of anti-regime Iranian football fans, demonstrating their protest, in and around the stadium was very visible. It must be said that it was also not that the pro-regime fans were not attending the games.

Eventually, after losing 1-0 in an emotionally-charged game against the USA, Team Melli bowed out of the world cup in Qatar.