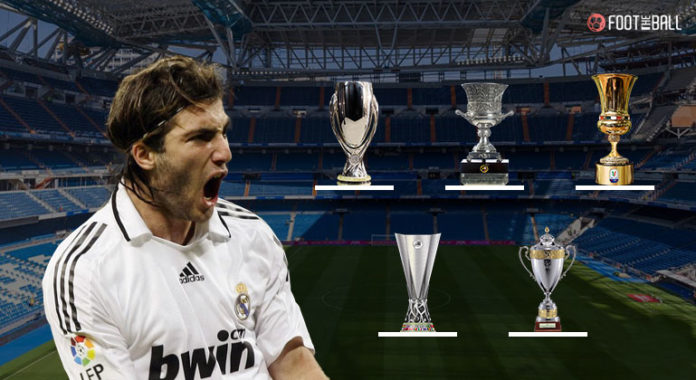 710 matches, 335 goals, 113 assists, 14 trophies, and three individual awards. After 17 years, Gonzalo Higuain’s incredible career has finally come to an end. The 34-year-old striker played his last game for Major League Soccer (MLS) side Inter Miami against New York City. And while his team may have lost the match 3-0, it does not take the fact that Gonzalo Higuain remains one of the best strikers of this century.

Throughout his career, the Argentine played for some of the biggest clubs in the world. Only a special player has a CV, including stints at River Plate, Real Madrid, Napoli, Juventus, AC Milan, and Chelsea. What is more remarkable is that he was one of the leading players at every club. He was also followed vehemently by lovers, haters, goals, controversies, records, and trophies.

Now that El Pipita has retired, we look at the most significant moments from his career. These include wins, losses, victories, defeats, joys, sorrows and much more.

Coming into the 2010 FIFA World Cup, Gonzalo Higuain was in the form of his life. The forward had scored 27 goals in an impressive La Liga campaign, second only to his national teammate Lionel Messi, and one more than his Real Madrid one, Cristiano Ronaldo. So, much was expected of him when Argentina landed in South Africa to win their third World Cup.

And Higuain didn’t disappoint, scoring a fantastic hat trick against South Korea. Thus, he became the third Argentine after Guillermo Stabile and Gabriel Batistuta to do so. So, while Argentina went out of the tournament after losing to Germany 4-0, Higuain had a tournament to remember.

A two-peat with Real Madrid

When Gonzalo Higuain joined Real Madrid in December 2006, Los Blancos had gone three seasons without a La Liga title. Furthermore, club President Florentino Perez who had sanctioned the Galacticos era, had also resigned. And it was under such dire circumstances that he arrived in Madrid. And while he only scored two goals and provided three assists, Real Madrid won the title on head-to-head in his debut season.

He would win his second consecutive La Liga titles the following season, scoring eight goals, and provided three assists playing second fiddle to Ruud van Nistelrooy and Raul. While he may not have been an undisputed starter, the experience of winning trophies would remain with him throughout his career.

Recruiting the star recruiter : Who is Joe Shields, Chelsea’s new Director of Recruitment

Ironically, despite winning 14 trophies throughout his career, Gonzalo Higuain’s best season came in a season where he won none. In 2013, Real Madrid had deemed Higuain surplus to requirements, with Karim Benzema and Alvaro Morata being entrusted to the role. The Argentine went to Napoli, where he would have his best season two years later. Higuain would score 36 goals equalling the record for most goals in a season set by Gino Rossetti 86 years earlier. Since then, only Ciro Immobile has equalled his tally.

Of the six players to have scored 200+ goals in the big five European leagues since the start of 2006-07, only Lionel Messi (20.94%) has a better shot conversion rate than Gonzalo Higuain (19.96%)#FPL pic.twitter.com/8cfUJDesrk

And while no trophy came at the Estadio Diego Armando Maradona stadium, the fan got to witness one of the best individual seasons in the club’s history.

Who is Vitor Roque: Newest star to come out of Brazil’s talent factory

The record transfer to Juventus

The 2015-16 season had alerted some of the top European clubs who were now looking to sign the rejuvenated striker, And one of those clubs was Napoli’s Serie A rival Juventus. The Old Lady, who had won five consecutive Serie A titles, were flush with cash following the departure of Paul Pogba for a record transfer fee.

And thus, the record transfer of Gonzalo Higuain was sanctioned by Juventus’ hierarchy. This resulted in a € 90 million transfer, a Serie A record at that time. The Argentine was not only brought for Serie A success but continental glory as well. True to his talent, Higuain scored 24 goals in Serie A, guiding them to a sixth consecutive Serie A table. He was also instrumental in helping Juventus reach the Champions League final, where they lost to Real Madrid.

One is good, two is better, three is best. Players with the most number of hat-tricks in football history

After scoring four goals in the 2010 World Cup, Gonzalo Higuain was back in 2014 to repeat the performance. Argentina arrived in Brazil with an attack that included Lionel Messi, Sergio Aguero, Higuain, and Ezequiel Lavezzi. However, manager Alejandro Sabella failed to include all that attacking talent in the team. And Higuain was one of the worst performers scoring only one goal throughout the tournament.

However, his worst moment came in the final. The striker found himself one-on-one with Manuel Neuer, only to scuff his shot wide off the post. As a result, the game ended 0-0 after 90 minutes, and in extra time, Mario Gotze would score to hand Germany their fourth World Cup title, while Higuain would be left to rue his missed chances. Moments like this made him a footballer with a complicated image.