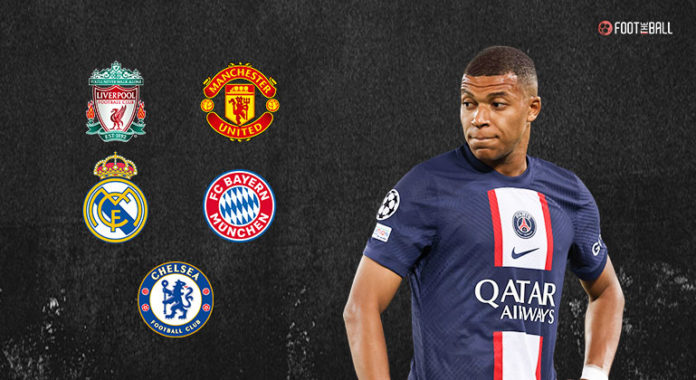 Barely four months after Kylian Mbappe signed the most lucrative contract in football history, Paris Saint Germain face a new challenge. According to media reports, the Frenchman has informed PSG’s top hierarchy that he wants to leave the club. This reignited the Kylian Mbappe transfer story, which was considered dead and buried after the summer transfer window.

The 23-year-old had reportedly signed a contract which gave him a € 114 million signing bonus and a weekly salary of € 7,40,000. However, reports state that Mbappe feels the club has betrayed him. One of the primary reasons has been the role he has been asked to play by new manager Christophe Galtier.

Under the current system, PSG deploy a three-person forward line which includes Lionel Messi, Neymar and Mbappe. In this formation, Mbappe is the designated number 9. However, the player prefers the left wing, a position he also plays on France’s national team. The only problem is that Neymar also plays in the position and, in Christophe Galtier’s eyes, is the best player suited to that role. This means that Mbappe has to lead the line.

Several media reports have also stated that Mbappe had asked the club to sell Neymar and replace him with a world-class number 9, which would allow him to play on the left wing. However, if he does leave the club, where could he go?

We bring you the top five landing spots that could end the Kylian Mbappe transfer saga.

It could be one of the most ironic ends to the Kylian Mbappe transfer saga if he were to join Real Madrid. For the entire summer, Real Madrid chased the signature of Mbappe. And for the most part, it appeared Mbappe would switch over to Santiago Bernabeu. The club had even limited their transfer activity for the last three transfer windows to save enough to sign the wunderkind and be under La Liga’s s spending regulations. However, Mbappe backtracked after receiving PSG’s offer. This caused massive resentment among Madrid fans, who accused the player of playing for money.

After Real Madrid’s Champions League win, the club’s President, Florentino Perez, famously said, “Real Madrid will always continue to work on having the best players, but today Mbappe is already forgotten”. However, a player like Kylian Mbappe comes once in a generation and signing him would immediately make Madrid one of the best clubs in the world.

Kylian Mbappé, not happy with Paris Saint-Germain as current situation is really tense. He wants to leave the club, as soon as possible. 🚨🔴🔵 #Mbappé

Paris Saint-Germain feel he’s really putting pressure on the club — they have no intention to sell Mbappé in January. pic.twitter.com/tETVVxB2yy

Could it happen? For years, any story of a Kylian Mbappe transfer has involved Liverpool in one way or another. Liverpool’s manager Jurgen Klopp is s fan of Kylian Mbappe and vice versa. For years, reports have linked the Frenchman to the Reds. However, Liverpool are one of the stingiest clubs in the world regarding transfer dealings. Bringing in Mbappe will require an enormous sum of money, discounting the massive wages he would command.

However, in recent years Liverpool have not been shy of spending over the top for world-class talents. Just this summer, the club spent € 75,00 million to bring talented striker Darwin Nunez to the club. And bringing in Mbappe would make Liverpool’s attack almost on par or even better than Manchester City’s attack. Imagine Mohamed Salah, Darwin Nunez and Kylian Mbappe against the opposition. However, that would require a transfer whose sum would be unprecedented in football history.

After the first two matches in the Premier League, it looked like Manchester United were in deep peril. However, to his credit, Erik Tan Hag has managed to make things better. In their last six matches, United have taken 15 points, only losing to Manchester City during this run. In addition, the team spent a considerable sum of money to sign Lisandro Martinez (signed from Ajax), Antony (signed from Ajax), Casemiro (signed from Real Madrid), and Tyrell Malacia (signed from PSV).

However, among all these signings a lack of proper world-class attacking talent. Antony is a wonderful prospect, but he does not bring the same experience as Mbappe. United’s owners are also facing heat from the fans over the team’s performances. Many have called for change and have vehemently protested against the Glazers. Signing a player of Mbappe’s calibre would surely do a lot in dousing the anger against them.

There has been no club in Europe that had more chaos surrounding it in the last few months than Chelsea. The club has their owners change, their managers change, their technical director change, their chief scout change and many more. The club sacked Thomas Tuchel after a string of poor results, and the team are now delivering good performances under Graham Potter. However, they remain far from the levels of the top clubs. Acquiring Kylian Mbappe will not only improve the quality of Chelsea’s clubs but would also serve as a statement signing.

Reports in the media today that our owners are seriously considering signing Kylian Mbappe, financially its not an issue. I know a lot of Chelsea fans are not keen based on the way he has behaved at PSG but as a player he is one of the best players in the world. pic.twitter.com/GtfY8WpgiZ

New owner Todd Boehly has clarified that he wants to take Chelsea to the next level and is ready to invest. With the form of Manchester City, the margin of error to win the Premier League has become so small that clubs need top players to ensure they stay in the race. A Kylian Mbappe transfer to Chelsea could do the same.

When Robert Lewandowski signed for Barcelona, the German club lost one of its biggest stars in the summer. The Germans signed Sadio Mane as a replacement, while the Senegalese is one of the best attackers in the world but is 30 years old. So the club will need to sign someone younger who could give them many years. Mbappe could be that player and would form a devastating partnership with Leroy Sane and recreate the magic of Franck Ribery and Arjen Robben.

However, like with every other club on the list, the resources required for a Kylian Mbappe transfer are vast. And pouring an obscene amount of money on a single player can have disastrous consequences (ask Barcelona). In the end, his best option would be to wait till 2025, when his current contract expires, and he can leave on a free. For now, Viva la Paris is the best hope.