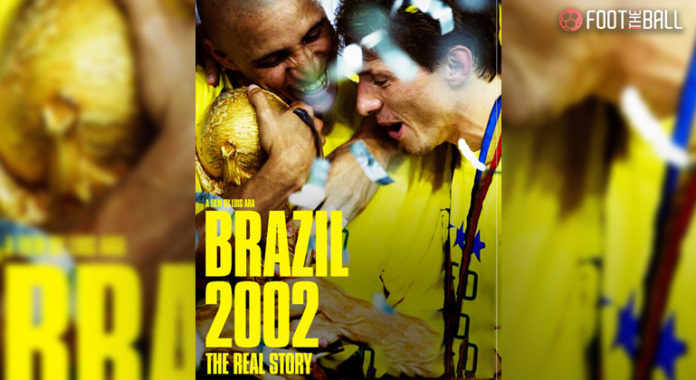 There is something about the football heritage and air of Brazil. The football legends born in the South American region go on to etch their names in the beautiful game’s history. From the likes of Pele, Socrates, Zico, Ronaldo and Ronaldinho to the likes of the ones in the current batch of Neymar, Vinicius Jr, Thiago Silva and the goalkeeping duo of Ederson and Alisson, Brazil are known for the rich pool of talent they produce.

Such is their name and fame in football that even the filmmakers want a piece of the action when it comes to football. Amazon had taken notice about this and decided to launch a documentary which revolved around their record Copa America win in 2019, which is similar to the one recently launched called ‘All or Nothing: Argentina‘.

Next up is, a documentary on Brazil’s famous 2002 World Cup win in Japan. celebrating its 20-year anniversary, Collective Media Group and Entourage Sports and Entertainment‘s soccer documentary feature “Brazil 2002: The Real Story,”.

It will feature many of the stars of that team, as well as famous faces from across the footballing world. This includes Ronaldo, Ronaldinho, Cafu and Gilberto Silva from the World Cup winning Brazil team; and, from the opposing teams across the tournament, David Beckham, Michael Owen, Oliver Kahn, Hasan Saş and Marc Wilmots, as well as legendary referee Pierluigi Collina. Two stars of the World Cup winning side – Roberto Carlos and Belletti are executive producers alongside Rebecca Knight and Claire McArdle for Collective Media Group, Mark Cowan and Paul Brighten for Entourage Sports and Entertainment, and Luis Ara for Trailer Films, who also is the director and writer of the film with Collective Media Group’s Arianna Perretta as producer.

‘Brazil 2002: The Real Story’ is the tale of the team who were victorious at the 2002 FIFA World Cup, told from the dressing room, and against the spectre of Brazil’s infamous loss in the 1998 World Cup Final in Paris.

The film uses six hours of unseen archive material shot by Brazilian football legend Juliano Belletti during the tournament, forming the story’s backbone.  It is combined with interviews from the winning team, both on and off the pitch, and other giants of the game to give a unique insight into one of history’s greatest-ever football teams.

According to IMDb, the much-awaited documentary will be released on 13th November 2022.

Where to watch Brazil 2002: The Real Story

Sky in the UK, Front Row Filmed Entertainment (Middle East) and Viaplay (Sweden, Denmark, Norway, Finland, Iceland, the Netherlands, Poland, Estonia, Latvia and Lithuania) were unveiled as buyers back in February when it was announced. TelevisaUnivision also announced its acquisition of the film for North and South America (excluding Brazil), as part of the slate of originals coming to ViX+, through a deal with doc co-producer Trailer Films.

Collective Media Group and Entourage Sports & Entertainment produced the doc, which tells the story of Brazil’s FIFA World Cup 2002 win in South Korea through the eyes of the dressing room. It uses six hours of unseen archive material shot by Brazilian football legend Juliano Belletti during the tournament, which forms the backbone of the story.

The official trailer of Brazil 2002: The Real Story is available on the official website of Abacus Media Rights which you can find here.

This documentary provides all behind the scene footage of Brazil’s famous World Cup victory in 2002, and fans will no doubt be eager to have a glimpse at it.