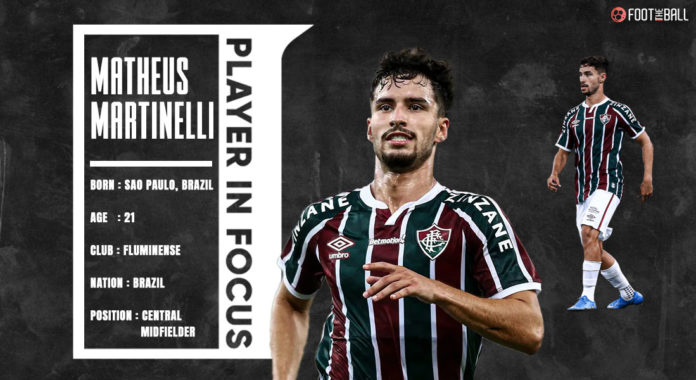 The 2022 Campeonato Carioca final was an important match for Fluminense. The club had failed to win a single trophy since 2016, and then manager Abel Braga was desperate for the trophy. In the end, they won the match 2-0, but amid all the glory and celebrations, there was one player that would become integral to their team. 21-year-old Matheus Martinelli was an unused substitute that day but has now established himself in the centre of the midfield.

The 21-year-old is among the top young players to emerge in the Brazilian league. And while the media may be more fascinated by talented 17-year-olds such as Endrick Felipe of Palmeiras and Vitor Roque of Athletico Paranaense, Matheus Martinelli is slowly and quietly becoming a force to reckon with.

And while Fluminense may only be fifth in the Brazilian league, they are only three points shy of third place. Only once in the last eight years have Fluminense finished in the top five, which makes this one of their most successful seasons in recent times. And Matheus Martinelli has played a massive part in it as the orchestrator-in-chief.

New manager Fernando Diniz has made him the base of the midfield in his 4-2-3-1 formation. So, who is Matheus Martinelli, and how good is he?

How good is Matheus Martinelli?

Born in Presidente Prudente, Sao Paulo, Brazil, Matheus Martinelli started his career at the local club Marília Atletico Clube. He joined the club at the age of 12. Over the next two years, Martinelli would change clubs twice. First, he joined Osvaldo Cruz Futebol Clube in 2013, leaving after one year to join Gremio Desportivo Prudente.

He was making rapid strides in promoting himself through various age groups all this time. This did not escape the attention of some of Brazil’s top clubs. Fluminense would move ahead of the pack and snap the youngster. Arriving at the Rio club, Matheus Martinelli would play under various age groups. However, his journey started with the under-17s. There he would share the pitch with Joao Pedro, who now plays for Watford, Kayky, who has joined Manchester City and Fluminense first-team players Marcos Paulo, Calegari and Luiz Henrique.

Matheus Martinelli, 21, is a CM for Fluminense in Brazil. He’s recently become a starter alongside André in Diniz’ possession-heavy 4-2-3-1. A very dynamic player who’s become a top performer in Brazil since August. Many European clubs should be looking at him, @ManUtd included. pic.twitter.com/Azvktgc8pe

Playing with such quality players immensely improved Matheus Martinelli’s game. And after three years which included a stint with the under-20s, Matheus Martinelli made his professional debut against Red Bull Bragantino on November 30, 2020.

Martinelli has not looked back since then, establishing himself in the first team. Under Fernando Diniz, the Brazilian has become the regista for the team, constantly dictating the play from deep.

After making his debut, Martinelli would go on to make 12 more appearances throughout the season. Nowhere in the first season it looked as if he was out of his depth. However, his best performance came against Goias Esporte Clube, in which he scored a brace to earn the Man of the Match.

He ended the season with three goals averaging an impressive 88 per cent accurate passing. He also won more than half of his aerial and ground duels. At the same time, making 1.8 interceptions and 1.8 tackles per 90 minutes.

In the following season, he played 31 matches. However, it was a season of struggle for Fluminense, who finished seventh in the league. The club took drastic measures replacing Abel Braga, who resigned despite winning the Campeonato Carioca.

His first 2 goals for @FluminenseFC – one a golaço!

And not for nothing but Fluminense haven’t lost with him in the starting XI. pic.twitter.com/t5xwIn3Dgg

Fernando Diniz became the new manager under who Martinelli has thrived. Diniz preferred a 4-2-3-1 system which made Matheus Martinelli the orchestrator. The 21-year-old has taken up the role like a duck to water.

He has made three assists in the league, but his most important asset has been his passing. According to Fotmob, Martinelli makes 65.4 accurate passes per 90 minutes, the third-best in the league. This makes him a dangerous proposition as he can find chinks in the opposition’s defence relatively easily. It is one reason his team are the third-highest-scoring team in the league.

Matheus Martinelli is an exceptional talent, but his simplicity makes him unique. The Brazilian is not a Kevin de Bruyne who will produce wonder through balls but instead chooses to keep it simple, ensuring his every pass is forward and accurate. And doing this consistently helps him find gaps in defence who are bound to make mistakes when faced with such accurate, simple passing.

So, Martinelli is a rare breed of player in a nation of flamboyance and outrageous skill. His play hugely depends on passes between lines, forcing the opposition to break their shape and creating gaps for Fluminense to exploit.

Martinelli drops down the pitch from time to time, splitting the two centre-backs and forming a three-person backline, especially when Fluminense starts the play with a goal kick. During these phases of the game, he acts as a ball-playing defender allowing him to control the game’s tempo. This also ensures that if the opposition deploys a high press, having Martinelli on the ball will not make it easy for rivals to win the ball.

After winning it all as a player, Xabi Alonso is back as a manager to reconquer it all

Matheus Martinelli has been on the radar of several clubs since 2020. One of the first clubs to express their interest was Arsenal. Reportedly, the Gunners had sent their scouts to analyse the midfielder’s play. However, several media reports stated that Fluminense’s € 40 million valuation put the club off.

Manchester United were also reported to be interested but never made an effort in that direction. And their interest is the validation that Matheus Martinelli deserves. However, Martinelli still has to iron out several aspects of his game. His lack of goals is a significant worry that Martinelli has acknowledged.

In addition, his defensive contributions could also improve, making him a multi-faceted player, essential for his dream move to Europe. But for now, his focus should be on bringing the league title to Fluminense, a trophy that last came in 2012 to the Maracana Stadium.