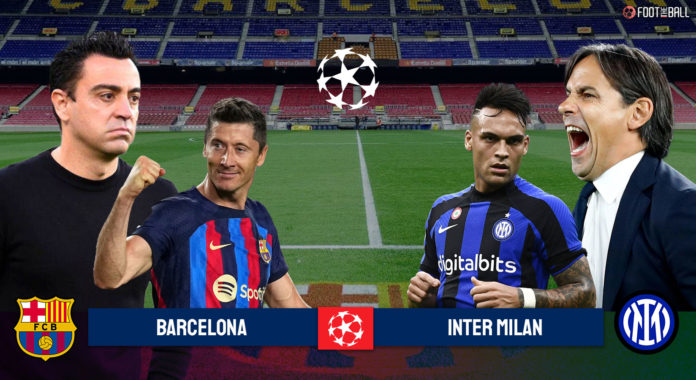 During the entire summer transfer window, between the record departures and arrivals of players, the centre story was always FC Barcelona. The Catalan club had it all, selling their stake and activating economic levers to fund their players, then having to ponder whether they would be able to register their players. However, in the end, it all turned out well, but not so in the Champions League. Xavi’s men have endured a horror start to their Champions League campaign, winning one and losing two. To make matters worse, they are in the Group of Death, which include Bayern Munich and Inter Milan.

Barcelona’s latest match in the group saw them lose 1-0 to Inter Milan. Now they welcome the Italians to Camp Nou with nothing short of victory an option for them. In their two matches against Bayern Munich and Inter Milan, Barcelona lacked a Plan B. This, coupled with their inability to take their chances, has put Barcelona in a spot of bother.

Inter Milan, on the other side, will be happy with their performance till now. The Italians delivered a gritty but efficient performance against the Catalans. Now they will be hoping for a repeat of that performance in Spain. Even without the services of Romelu Lukaku, who signed in the summer, Inter have been a force in the Champions League. Hakan Calhanoglu has also been brilliant, scoring an exquisite goal against Barcelona in the previous match.

The Spanish club’s form in the Champions League starkly contrasts with their run in La Liga. Barcelona are top of the league scoring the most goals and conceding the least. However, this form has eluded them in the Champions League. Robert Lewandowski has failed to have any impact in both matches, which has hurt the team the most. And the team will need to turn around their form quickly if they want to qualify.

Barcelona’s impressive start in La Liga has been marred by only two things: their Champions League form and their injury list. The medical team at Barcelona have their hands full as the injury list continues to grow. The team has lost Ronald Araujo, Jules Kounde, and Andreas Christensen, their three centre-backs, to injury. In addition, Franck Kessie, Memphis Depay and Hector Bellerin have also joined them. This could mean some hard choices for Xavi. With the limited option in the centre of the defence, Gerard Pique may partner Eric Garcia. It also remains to be seen if Xavi will persist with Markus Alonso at left-back or give Alejandro Balde a chance.

🔥 It's a crucial week for #Barcelona, as the Catalan team needs to defeat Inter Milan…

🔍 But it's also a very important moment for Lewandowski: he was signed to score in the big games and he hasn't done it vs. Bayern & Inter.

Inter Milan are also suffering from injuries of their own. Their star striker Romelu Lukaku has yet to recover from his muscle injury. Another striker on the sidelines is Joaquín Correa. Left-back Dalbert, defensive midfielder Marcelo Brozovic and goalkeepers Alex Cordaz and Gabriel Brazao complete the injury list for the Italians. This is why Inter is currently languishing in seventh place on the Serie A table. However, they have shown better performances in Europe which will give manager Simone Inzaghi hope that they could get a positive result against Barcelona.

When Robert Lewandowski signed for Barcelona in the summer, the fans must have expected many goals from the Pole. And Lewandowski has not disappointed. The 34-year-old has scored nine goals in La Liga, the most in the league. He also scored a hat trick on matchday one of the Champions League against Viktoria Plzen. However, he has failed to score in the last two Champions League matches, missing some great chances. However, this does not change his stature as the best player for the team, which he will be against Inter.

For Inter Milan, it has been a collective effort from every player rather than a single game-changer. However, if one had to point out, then the duo of Lautaro Martinez and Hakan Calhanoglu will be on top of the list.

Despite all the permutations and combinations, this is a must-win for Barcelona. A failure to do so could have dire consequences for the Catalans in the Champions League. However, while Barcelona may have lost their two matches against Bayern and Inter, they came on the road. At Camp Nou, the brimming talent of Barcelona will have an incredible atmosphere backing them up.

Barcelona have always won vs Inter Milan at the Camp Nou.

FootTheBall predicts a 2-1 win for Barcelona.