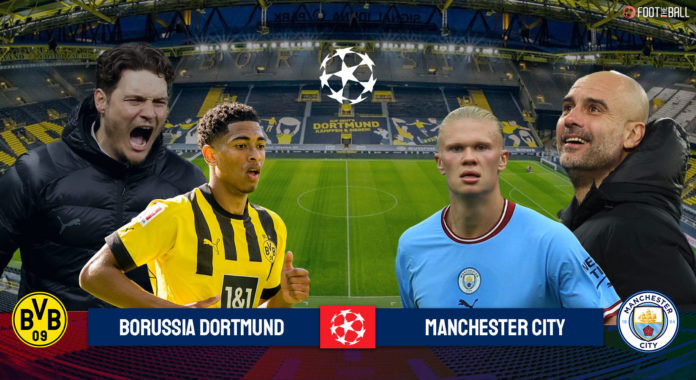 15 matches, 22 goals, and three assists. The legend of Erling Haaland continues to rise. There were high hopes for the Norwegian to hit the ground running when he was signed in the summer transfer window. However, not even Pep Guardiola would have anticipated Erling Haaland’s impact. Only Mikel Arteta’s Arsenal look like title contenders challenging City.

However, Erling Haaland will now face his most formidable challenge as he makes an emotional return to Signal Iduna Park to face Borussia Dortmund. The Citizens have won the reverse fixture 2-1, in which Haaland scored. Pep Guardiola’s team has remained undefeated in the Champions League, winning three and drawing one and have already qualified for the next round.

Haaland has been the driving force behind this charge. The Norwegian has scored five goals, the joint-most in the tournament. And he has been entirely accurate as well. Out of his eight shots on target, five have ended in the back of the net. Other brilliant performers include Joao Cancelo (most assists in the tournament), Kevin de Bruyne and Bernardo Silva.

For Dortmund, the star has been Jude Bellingham. The Englishman had been the driving force for Edin Terzic’s men scoring four goals and providing one assist. He has always risen for the big occasion, and a clash against City is perhaps one of the biggest matches he could dream of.

The loss of Haaland has undoubtedly been felt, with Dortmund currently struggling in the fifth place in Bundesliga. However, they are still only four points behind league leaders Union Berlin. City know that even a draw would secure the top spot for them. The English champions have the players to put Dortmund to the sword, but it won’t be easy against one of the most intense atmospheres in Europe.

We have already seen Robert Lewandowski struggling while playing at Allianz Arena, and now Haaland will face a challenge of the same magnitude.

Borussia Dortmund are struggling with injuries, some of which have been out of control. Their star signing, Sebastian Haller, has been out after he was diagnosed with testicular cancer. He has been joined by Mahmoud Dahoud, Donyell Malen, Thomas Meunier and Marco Reus. These players bring experience to the team, and their loss will be hard to fill, especially against a team of City’s calibre.

For City, there is only one position that has been most affected by injuries: full-back. The injury to Kyle Walker has forced Joao Cancelo to play in a position he is not comfortable with. New signing Sergio Gomez meanwhile, has been brilliant at left-back. Other players to join him on the injury list are another new signing Kalvin Phillips and centre backs John Stones. However, apart from that, City have a largely fit squad which they will need as they look to launch their assault for multiple trophies.

Erling Haaland is the first #ManCity player to score in seven consecutive home games in all competitions since @aguerosergiokun in February 2018. 🐐🤝🐐 @OptaJoe

As already mentioned, no player has been better than Jude Bellingham in the entire Dortmund squad. The 19-year-old has been a force to reckon with and has bossed in the middle of the park. He has been the reason that Dortmund have performed far above expectations.

However, there have been others who have stepped up to the plate. One of them is 17-year-old Youssoufa Moukoko, who is the team’s top scorer in the Bundesliga and scored a crucial goal against Bayern Munich in the Der Klassiker.

By now, even non-football fans know that Erling Haaland is the star of Manchester City. The Norwegian has been on fire, barring Liverpool, and no one has been able to stop him. However, if Halland is scoring goals, De Bruyne and Bernardo Silva are providing them.

The trio have been influential for Guardiola’s team and will be expected to step up once again against Dortmund; In defence, the teams have been chopped and changed according to the rivals’ formation and personnel.

Borussia Dortmund are on the cusp of qualification, and a win will seal their passage into the next round. However, in their way, stand the most in-form team A draw in the other fixture between Sevilla and Copenhagen would automatically seal their spot.

Dortmund’s win will also be a massive boost for their entire campaign.