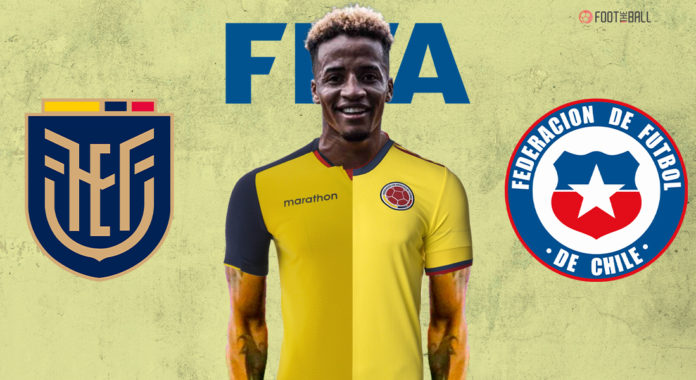 Why did the Colombian play for Ecuador? To get to the 2022 FIFA World Cup in Qatar, of course! No? This joke doesn’t ring a bell?

Well, none of the parties involved are laughing anyway. It is because the football federations of Chile and Ecuador are involved in an almighty scrap over a player of Barcelona SC.

Not the first time a club with that name finds itself in turmoil. Nevertheless, in this regard, FIFA is involved and has to act as the judge in this case of mind-blowing details. Whichever way FIFA goes, it will have major ramifications on the World Cup.

Therefore, it is important to know the facts of the matter in detail. The central question surrounding all of it is, whether right Byron Castillo is a Colombian or Ecuadorian citizen?

“There are innumerable proofs that the player was born in Colombia, in the city of Tumaco, on July 25, 1995, and not on November 10, 1998, in the Ecuadorian city of General Villamil Playas.”

So, why does it have the potential to blow up into a major kerfuffle? Well, Chile complained to FIFA in early May that Ecuador should be docked points from all the qualifying matches that Castillo was involved in.

He states that there are inconsistencies and believes documents were falsified.

“There are no fingerprints on the document”.pic.twitter.com/6AyUCY0mpB

The defender had played in eight games, with Ecuador winning 14 points in them. Chile want FIFA to give all of Ecuador’s opponents during that time three points each. That haul, coupled with a superior goal difference, would see Chile jump to the fourth spot in CONMEBOL rankings.

Ecuador went through in that position, with Peru coming in fifth. Chile finished seventh, and if their complaint is successful, they can take Ecuador’s spot. FIFA is actively investigating the issue, and it is not like the claims are totally baseless.

The @ANFPChile presented to FIFA a copy of Byron Castillo's baptism certificate- from Tumaco, Colombia https://t.co/DN7XaBHuMU

Ecuador had carefully studied Castillo in recent years, to judge whether he was Colombian or not. He was selected for the national team eventually.

FIFA is expected to make its decision soon, and it would have major implications for the world of football, both now and at the World Cup. There have been cases of false identities used by players in the past, but none of them have ever been close to impacting a World Cup.

Will Chile actually go to Qatar?

Chile had an extremely disappointing qualifying campaign. Alexis Sanchez and co. were not supposed to be at the first-ever winter World Cup. However, a legal technicality can now see them make the mega event. Ecuador will feel hard done by if FIFA rules against them. There has been no indication yet of which way the judge will likely go.

Nothing has been finalized in terms of Byron Castillo. The rumor only repeats the allegations made by Chile ahead of the final decision on Friday. The Ecuadorian federation is confident that the ruling will be in their favor.

Even if Chile win the case, Ecuador will have the right to lodge an appeal at the Court of Arbitration (CAS).

It will then depend on how long the decision takes to arrive. Ecuador have been drawn into Group A alongside hosts Qatar, Senegal, and the Netherlands. The Dutch are one of the favourites for the World Cup, while Senegal are the defending AFCON champions.

Therefore, it will not be easy for any team to oust those two in terms of making it to the next round. However, Chile have some extremely talented players who can gel together well.

Needless to say, all of this is a talk for when Chile are officially confirmed for the World Cup. Ecuador will not give up without a fight, and this story has several twists left in it.