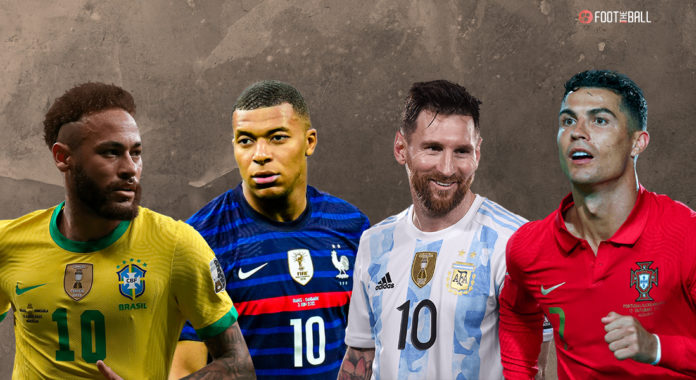 There are 195 official countries in the world right now. Only eight among them have won the FIFA World Cup. None of them have been from Asia or Africa.

Keeping the geopolitics and a variety of conditioning factors aside, winning the World Cup is the pinnacle of football. In that regard, the 2022 FIFA World Cup in Qatar is on the horizon.

Last #FIFAWorldCup places up for grabs. 🎟 🎟 🎟

32 countries will slog it out for a month in a bid to win the most coveted prize in men’s football. As always, some nations are more favoured than others in terms of winning it all. FootTheBall counts down the top 10 favourites for the mega event in the Middle East.

After Croatia in 2018, will it be Denmark in 2022? The Danes were lauded across the world after coming together to qualify for Euro 2020.

Christian Eriksen has returned to the national fold, and Denmark have supreme talents across the board. Yussuf Poulsen, Joakim Maehle, Kasper Schmeichel, Simon Kjaer, and others are ready to roll.

Lacking a true superstar could be just what they need in Qatar. Denmark were undefeated throughout the World Cup qualifying campaign and recently upset France 2-1.

Denmark are in Group D, with Les Bleus as their major challenger. Thus, they could snag one of the top two spots and move on to the second round.

The Dutch have never won the FIFA World Cup, and 2022 will be a longshot too. They have recalled Louis van Gaal in a bid to turn their fortunes around. Having missed out in 2018, the 2010 finalists will look to make some major waves. The Netherlands were humbled at Euro 2020 after a fabulous group stage.

🇳🇱 The Netherlands did an amazing job against Belgium and seems to be an underdog for the World Championship!

They can take mojo after thrashing Belgium 4-1 in the opening fixture of the UEFA Nations League.

There are several young players to be excited about including Bayern Munich-linked Ryan Gravenberch, Manchester United-linked Jurrien Timber, Denzel Dumfries, and PSV star Cody Gakpo all behind the mercurial Memphis Depay. Van Gaal’s men are in Group A with Qatar, Senegal, and Ecuador with progression seemingly a formality.

Will the Golden Generation finally live up to its billing? Belgium have flattered to deceive over the past few years. With players such as Thibaut Courtois, Romelu Lukaku, Kevin De Bruyne, and other stars, the Red Devils have struggled at major tournaments.

Belgium came third at the last World Cup but were knocked out at the quarter-final stage by Italy at Euro 2020. They were shellacked 4-1 by the Netherlands recently after De Bruyne called the Nations League “glorified friendlies.”

This is likely to be the last chance for Roberto Martinez and Belgium to win the biggest prize the World Cup, given it is expanding from 2026. However, their journey in the group stage will not be easy.

Canada are gunning to impress at their first World Cup since 1986. Morocco are no pushover while Croatia reached the final in 2018. Thus, Belgium will have to be on A-game from the start.

The post-Joachim Low transition is in full flow for Die Mannschaft. Hansi Flick is a sextuple winner with Bayern Munich and has turned Germany into a mean machine.

They are unbeaten in their last 11 matches as Flick brings newer faces into the fold. New Borussia Dortmund signing Karim Adeyemi and Nico Schlotterbeck, Bayer Leverkusen star Florian Wirtz, Jamal Musiala, and several others have been joined by the veterans in Thomas Muller and Manuel Neuer.

The 2014 winners are favourites in every edition of the World Cup. However, the group stage will not be easy as they are drawn with Japan, Costa Rica/New Zealand, and Spain.

La Roja will present the most formidable challenge for Flick and co. Of course, they can finish second and qualify but that could mean a date with Belgium in the next round.

Cristiano Ronaldo is showing no signs of slowing down. He is breaking records in almost every match and will be essential in leading Portugal’s charge.

The Euro 2016 champions have a stellar cast of superstars to support Ronaldo. Bernardo Silva, Joao Cancelo, Joao Moutinho, and others will be vital to help Fernando Santos’ side. The world stage has proved to be a step too far in the past, and it could happen again.

Therefore, Portugal need to evolve in the games before the World Cup to lessen their dependence on Ronaldo. Moreover, they are in a tough Group H alongside Ghana, South Korea, and two-time winners Uruguay. Thus, finishing second is a possibility for one of the favourites for the World Cup.

The 2010 winners are in full rebuild mode under Luis Enrique. Only Jordi Alba and Sergio Busquets remain starters from their era of dominance in the last decade.

Luis Enrique has been one of the most ardent promoters of youngsters to the national setup. They include Barcelona talents Gavi and Golden Boy Pedri, Ansu Fati, Villarreal attacker Yeremi Pino, RB Leipzig star Dani Olmo, and Unai Simon are regulars of the side nowadays.

In fact, Gavi recently became the youngest goal scorer in the history of Spain. This youthful squad made the semis of Euro 2020 and the final of the UEFA Nations League.

Therefore, La Roja have shown that they can mix it up with the favourites for the World Cup regularly. It will be a straight shootout between themselves and Germany for the top spot in Group E.

When Lionel Messi finds his groove back, he is incredibly hard to stop. Italy and Estonia have found that out recently. The Azzurri were thrashed 3-0 in the Finalissima 2022, with Messi pulling all the strings.

Having not scored then, Messi rebounded with five goals against Estonia in the next match to take his career tally to 1100 goal contributions. The comparisons with Diego Maradona will only ever end once the World Cup comes to Argentina.

They came close in 2014 but lost in extra-time to Germany. This time Messi has an even better cast around him, with Angel Di Maria, Lautaro Martinez, Rodrigo De Paul, and more. Lionel Scaloni’s men won the Copa America 2021, and are in Group C with Saudi Arabia, Mexico, and Poland. Argentina are the favourites to progress as group winners.

Is it coming home? Well, it can or it may not. England have been teasing their fanbase for decades in the hopes of winning the World Cup. They came the closest four years ago but lost to Croatia in the semis. There have been some changes to the squad since then, but most of the stalwarts remain.

Harry Kane is the ever-present focal point of attack, with the midfield duo of Declan Rice and Kalvin Phillips screening the backline. Gareth Southgate has an abundance of right-backs and attackers to choose from for Qatar 2022.

Last year’s Euro 2020 final loss to Italy on penalties would have certainly brought the team closer together and helped them grow. However, a shock defeat to Hungary in the opening match of the UEFA Nations League has posed a fresh set of questions.

The Three Lions are in Group B, with old arch-rivals Wales, Iran, and old nemesis the USA. It will be one of the most entertaining groups of the World Cup, but England should get first place.

Like France, the Selecao are doing a great job at inculcating young talents into their setup. Real Madrid star Vinicius Jr. is the shining light after a stellar season. He is supported by Neymar, the best Brazilian player of this generation. Tite’s side have two of the best goalkeepers in world football currently in Ederson and Alisson.

🗣️“I’m really happy that Neymar said that I should win the Ballon d’Or, but in my opinion, Benzema deserves it more. Karim also jokes with me that he wants to win against Brazil at the World Cup final, but I guess this ain’t happening”

One of the most well-rounded sides, Brazil are a threat from all departments and reached the Copa America final last year. The five-time winners have not won the World Cup since 2002, and a 20-year wait seems long enough.

Brazil are in Group G with Cameroon, Serbia, and Switzerland. Therefore, they should qualify as group winners as they remain one of the favourites for the World Cup.

The defending champions are the World Cup favourites again. The amount of depth Les Bleus have in every position is frightening. Led by Kylian Mbappe and Karim Benzema, there are very few teams that can match up to them on their day.

Moreover, France are also the current UEFA Nations League winner with Didier Deschamps looking to add another World Cup trophy to his cabinet.

The great strength of France lies in how well they can mesh their older core with upcoming stars. New Real Madrid signing Aurelien Tchouameni, old signing Eduardo Camavinga, and Scudetto winner Theo Hernandez, are some of the future stars who are regulars right now.

They are in Group D with Denmark, Australia/Peru, and Tunisia. The Danes will likely pose the biggest challenge but France should sail through as group winners.