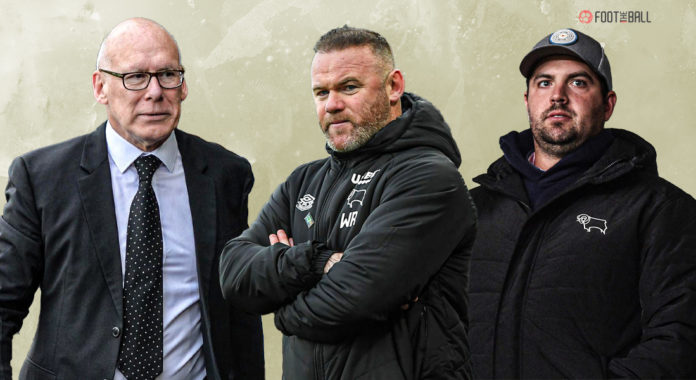 The situation at Derby County shows no signs of a solution. The Derby County takeover saga had a new, and unfortunate twist yesterday. Chris Kirchner, who was the preferred bidder and was close to completing a deal for the club, put out a statement yesterday. In his statement, the Slync.io CEO said that he was pulling out of the deal to take over the club after he failed to meet Friday’s 5 PM deadline to prove that he was in a position to take over the club.

After Derby County had been mired in financial disaster due to overspending under their previous owner Mel Morris, they flunked the FFP rules. Initially, Morris got around it by selling the club’s stadium, Pride Park, to his own company. Some clever accounting followed, and Morris kept manipulating the club’s accounts to stay in the green.

However, after failing to reach the promised land of the Premier League, Morris left the club in a financial mess. Posting record losses, Derby were forced to sell the majority of their players while banned from spending money on new players. After failing to comply with the Financial Fair Play rules, the EFL came down hard on the club.

Derby County couldn’t buy new players, but they discovered some diamonds in their youth academy- Malcolm Ebiowei was the chief among them.

The club went into administration. Repeated point deductions followed, totalling up to 21 points. Despite the great fight shown by Wayne Rooney’s players, the club was relegated in the 2021-22 season.

The administrators have been looking for new owners ever since Morris left. Moreover, their job became more difficult each day as Derby was heading towards relegation. Furthermore, Mel Morris still owned Pride Park, the club’s stadium. That raised the size of the investment further.

Derby’s potential new owner, Erik Alonso, has been asked by the EFL to prove that he has the funds to run a football club.

This morning he tweeted a video of a very fancy house.

Only issue is it looks VERY similar to a very fancy house on Tik Tok. pic.twitter.com/k8J71oWlXf

Erik Alonso was the first major name to throw his hat in the ring. However, he failed to show financial statements that would prove his ability to run the club successfully. After a lot of uncertainty, with manager Wayne Rooney publicly urging the process to speed up, Chris Kirchner emerged as the preferred bidder at the start of April.

Who is Chris Kirchner

Chris Kirchner is a USA-based businessman. He is the co-founder and CEO of Slync.io, a global logistics solution company he made millions from.

He publicly showed his interest in buying Derby County and was chosen as the “Preferred Bidder” at the start of April. This means that administrators were in exclusive negotiations with the Kirchner. Things looked near completion when on May 17, Kirchner announced that he’ll be the next owner of Derby County. However, multiple deadlines then came and passed as Kirchner failed to provide proof of funds to close the deal. As per BBC Sports, Chris Kirchner had difficulty transferring funds from the US to the UK.

I can say that signatures have already started today. We will be officially closing on Tuesday. It’s been a long journey, but we are now here. Thanks again to everyone involved and excited to begin the next chapter in a few days time! 🐏

Quantum, the administrators handling the sale of Derby, said in a statement:

“We’re aware some will be concerned by this news, however, the joint administrators wish to reassure the club’s staff, players and supporters they are continuing to actively engage with a growing number of interested parties, each of whom have a real willingness to complete a deal as soon as possible.”

As said in the statement, Quantum will now start talking to other interested parties. With the new season inching closer, the EFL has announced it will take a personal interest in all discussions between Quantum and potential bidders for a quicker resolution.

Behind-the-scenes, club staff are continuing preparations for next season and the freshly-laid pitch has had its first cut today 🚜🐏#DCFC pic.twitter.com/IhkEOIJORC

Former Newcastle owner Mike Ashley is reportedly interested in buying the club. It is believed that the exclusivity granted to Chris Kirchner hindered the efforts of Quantum to engage with other parties.

Now that Chris Kirchner has formally withdrawn his bid, the administrators can freely engage with other bidders, potentially six to eight of them. Proper vetting will need to be conducted, by both Quantum and EFL, so that a repeat of Kirchner’s saga is avoided.

The EFL is incredibly disappointed with this evening's announcement by Derby County's Administrators that Chris Kirchner has failed to complete the purchase of the Club. pic.twitter.com/bzIWWAqDpd

For now, Derby County is back at square one. No owners, still in administration, which threatens to derail their League 1 season before it begins.