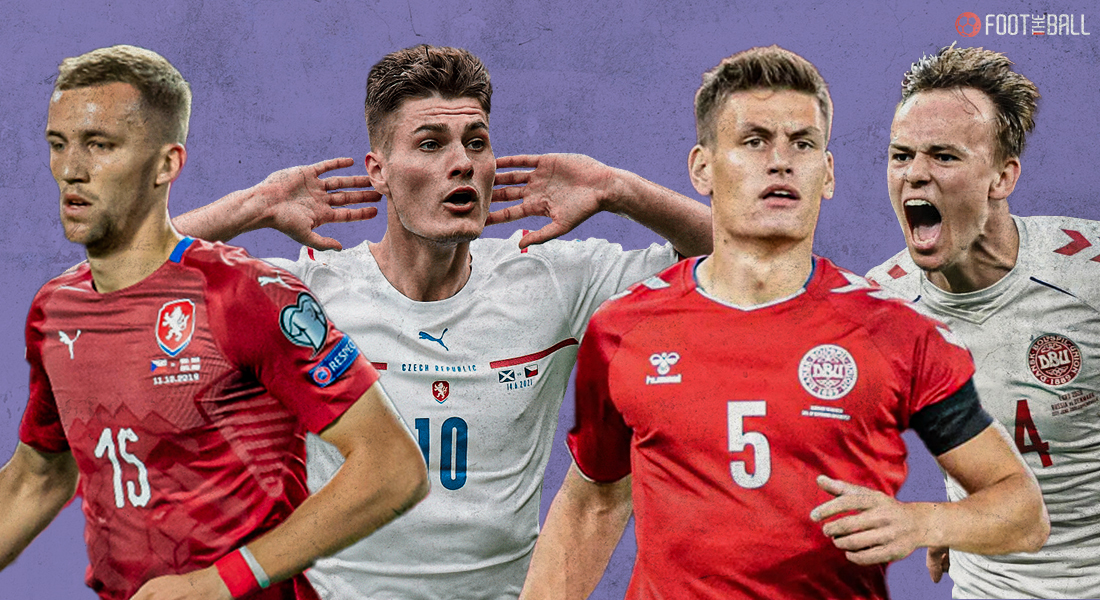 THE COMBINED XI OF CZECH REPUBLIC AND DENMARK - SCHICK, HOJBJERG, SOUCEK AND MORE

Czech Republic entered the quarterfinals in a dramatic fashion as they cashed in on a red card to Matthijs de Ligt in the 51st minute when the game was balanced at 0-0 and went on to win the game 2-0, thanks to goals from Tomas Holes and Patrick Schick.

While Denmark continued their superb form with a 4-0 demolition of Wales in the Round of 16, with Kasper Dolberg scoring two goals on his return to the Amsterdam Arena.

And ahead of what shapes to be a fascinating clash between the Czechs and the Danish Dynamites, we, at FootTheBall, have compiled our best-combined XI from the two squads.

Although Kasper Schmeichel has been very good at the back with his skills and stupendous with his leadership, Tomas Vaclik gets the nod in this eleven as he has been the busier man between the posts.

A talented and experienced goalkeeper who has been manning the net for his country for the past 9 years, Vaclik has singlehandedly kept two clean sheets in the group stage for his nation and had been superb in the Round of 16 fixture against a quality Netherlands attack.

One of the leaders in this Czech Republic side, Vladimir Coufal has grown in stature in this season, first with West Ham United in the Premier League and now with his national side in this Euros. A very able full-back defensively, Coufal’s qualities come out when he relentlessly attacks from the by-line when Lukas Masopust drifts inside from the right-wing.

Although he has not managed to score a goal, he racked up an assist in the first game when he assisted Patrik Schick with a trademark cross from the by-line.

Tomas Kalas, who captains Championship club Bristol City, is the leader of this Czech Republic side without the armband and a colossus at the back.

Kalas and his partner Ondrej Celustka have been one of the main reasons in Czech Republic keeping two clean sheets in the four games that they played this tournament.

Kalas will be up against an in-form Danish attack on Saturday, and it will be interesting to see how he tackles the likes of Dolberg, Damsgaard and Braithwaite.

Just as Russia were looking to threaten the Danish defence and score an equaliser, a goal from the unlikeliest source, Andreas Christensen, and that too a thunderbolt, restored Denmark’s two-goal lead. His performance was critical in the Round of 16 and he executed his gameplan so well that Wales could not find a way to penetrate the Danish defence, especially on the side of Christensen.

The partnership with captain Simon Kjaer and fellow Premier League player Jannik Vestergaard is blossoming into one of the strongest defences in this tournament but Denmark will have to be focused against a surprise-filled Czech Republic team.

One of the finds of the tournaments, Joakim Maehle has epitomised why Gian Piero Gasperini’s Atalanta has won the plaudits across Europe for providing talented wing-backs with the right resources for the progress of their careers.

Enjoying himself at #EURO2020 👏 pic.twitter.com/F4ZhEWKb5c

The performances in the group stage against Belgium and Russia helped him achieve a spot in our XI for the group stage while his performance to lock Gareth Bale and Daniel James in the Round of 16 game against Wales has become a positive talking point for the footballing fans.

After a mentally tough match against Finland, Thomas Delaney had been excellent in the game against Belgium but wasn’t able to help his side win. He went on to put in strong performances against Russia in the last group game and the Round of 16 fixture against Wales. Delaney will be key for Denmark against the Czech Republic on Saturday as there will be a fight for the control of the midfield. (Image Courtesy: Bundesliga / Website)

Another tough test awaits in the quarterfinal, with the Czech Republic likely to beef up their midfield with Tomas Soucek and Tomas Holes in order to take control at the heart of the midfield.

Although he lost the tag of being the top assister in Euro 2020 to Steven Zuber of Switzerland, Pierre-Emile Hojbjerg has been a revelation in the Danish midfield and has been the engine room for all the attacks for Denmark.

Pierre Højbjerg stats among all players in #EURO2020 so far

He has demonstrated way more qualities such as his ability to find the hard pass, the late entries into the box, in the three group stage, and the Round of 16 fixture, and has gone on to surprise everyone who watched him at Tottenham.

Another of West Ham United’s revelations this year, Tomas Soucek has shot onto the European scene very quickly since his move from Slavia Prague in the summer of 2020.

He has grown in stature and has become the vice-captain of this Czech Republic side and has become a bedrock in the midfield with his mighty displays along with Tomas Holes.

An interesting fight beckons for the Czech Republic and Soucek against Denmark as the midfield duo of Hojbjerg and Delaney might battle it out for the control of the game, resulting in a mouth-watering clash for the viewers.

Although he is traditionally a centre-forward during his time in the La Liga, Martin Braithwaite has shown his versatility during the Euros by playing in a more withdrawn role to accommodate the likes of Yussuf Poulsen and Kasper Dolberg and still had a substantial impact in attack.

He had featured in all four games for Denmark this tournament but has only one goal to his name from an xG of 1.7, which can indicate his poor finishing but has backed it up with some good link-up play in the side.

Christian Eriksen’s unfortunate incident in Denmark’s opening game of the tournament has not put a damper on Denmark’s hope for success as Mikkel Damsgaard, the 20-year-old, has grown in stature as the campaign went on.

20 years of age. The biggest revelation of the tournament. 🇩🇰 pic.twitter.com/9oJbvPIeR6

Although he didn’t have the same performance against Wales in the Round of 16, he managed to bag an assist and was a thorn for the Dragons in the 60 minutes he played.

The talisman of this Czech Republic side, Patrik Schick has become a different player entirely while turning up for the national side this tournament. Playing as the sole centre-forward for the Czechs, Schick lit up the tournament with a brace against Scotland in the group stage, including a goal from the halfway line.

Other than his immense goal-scoring prowess, Schick has also played a great role in pressing the opposition from the front and has been one of their most hard-working players, and his performance against Denmark will be key if the Czech Republic want to make it to the semi-finals.