THE RACE FOR THE GOLDEN BOOT Portugal might have gone out of Euro 2020 after their loss to Belgium in the Round of 16, but another accolade awaits their captain Cristiano Ronaldo at the end of the tournament if all things go right in the final between England and Italy on Sunday.

Having equalled Ali Daei’s record for the most number goals scored at the international level (109) after scoring twice in the 2-2 draw against France in the group stage, the Portuguese superstar is on course to win the golden boot award for scoring the most of number of goals at Euro 2020, albeit being level with the Czech Republic’s Patrik Schick.

Before looking at some of the options on who can win the golden boot, let us see the rules regarding the winner of the golden boot and what happens if two or more people are tied.

With only one more game to go in this edition of the Euros, we at FootTheBall, look at five players who can achieve the golden ball at the end of a potentially mouth-watering final on Saturday at Wembley.

Note: All statistics are taken from UEFA.

As discussed above, Cristiano Ronaldo leads the race for the golden boot after scoring five goals for Portugal in the group stage and the single knockout game. Although he is tied with Patrik Schick for the number of goals scored, he is ahead of the Czech striker courtesy of his one assist that he registered when he assisted Diogo Jota for his side second goal in the 4-2 loss against Germany in the group stage.

Ronaldo is set to win even if someone from the final ties with him on both goals and assists as he boasts a superior minutes/goals ratio, as he managed to rack up his five goals in just 360 minutes, giving us a minutes/goal ratio of 72 minutes per goal scored.

The nearest active competitor for Cristiano Ronaldo will be England’s, Harry Kane. The winner of the golden boot at the 2018 World Cup had started off the tournament in a languid fashion but has managed to score four goals until the final.

After blanking in the group stage, the Three Lions captain scored the second goal against Germany in the Round of 16, hit the back of the net twice in the quarterfinal against Ukraine, and was responsible for scoring the extra time winner against Denmark in the semi-final on Wednesday.

No England player has ever scored more goals at a major tournament than Harry Kane [10].

The Tottenham star is the only active striker that can realistically catch Ronaldo and he will need to either score two goals or score one and assist two other goals to snatch the award from the Portugal captain and make it two consecutive golden boots in major tournaments.

England’s primary goal scorer in the group stage, Raheem Sterling has a chance to snatch the golden boot award from Ronaldo if he manages to bring the form that he displayed earlier on in the campaign into the final against Italy.

After scoring three goals in four games, Sterling has gone to blank in the quarterfinal and semi-final against Ukraine and Denmark, respectively. He can win the golden boot award if he scores a hat-trick in the final or score two and assist another, taking him to a tally of five goals and two assists, which will be enough for the Jamaican born winger.

In the Italian camp, it has been a campaign where many have contributed to team goals. As many as five players are tied with two goals, with Ciro Immobile having the best chance of those five, courtesy of an assist to his name.

For the Lazio forward to win the golden boot, he will have to score four goals or score three and assist one more against a strong England defence that has kept five clean sheets in six games.

It is near impossible for an Italian to win the golden boot in Euro 2020, but if anyone has a chance it will be Immobile, granted that he starts against the Three Lions in the final.

The man in form for the Azzurri, Federico Chiesa has taken the knockout stages by storm after scoring two important goals for his side and is one of five Italians to have scored two goals at this Euros. 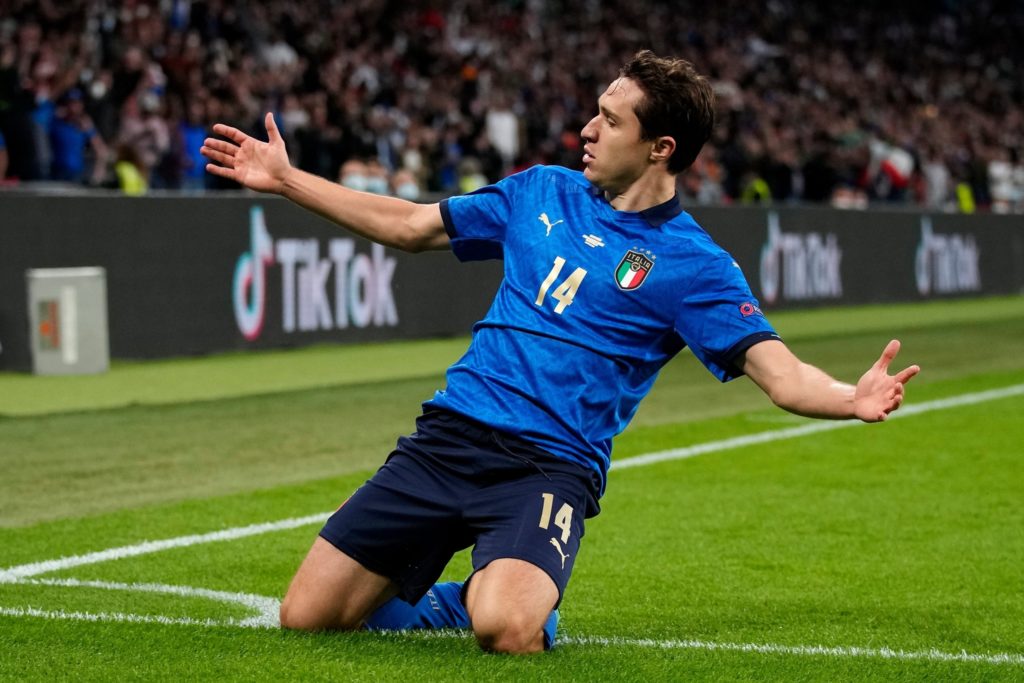 Although him winning the golden boot in Euro 2020 is a dream that cannot be achieved, weirder things have happened in football, and it would not be a surprise for some if something like that happened in a final.

Chiesa is certain to start in the final after impressing in the semi-final against Spain and will need four goals to win the golden boot or do an outrageous task of scoring three and assisting a further two.