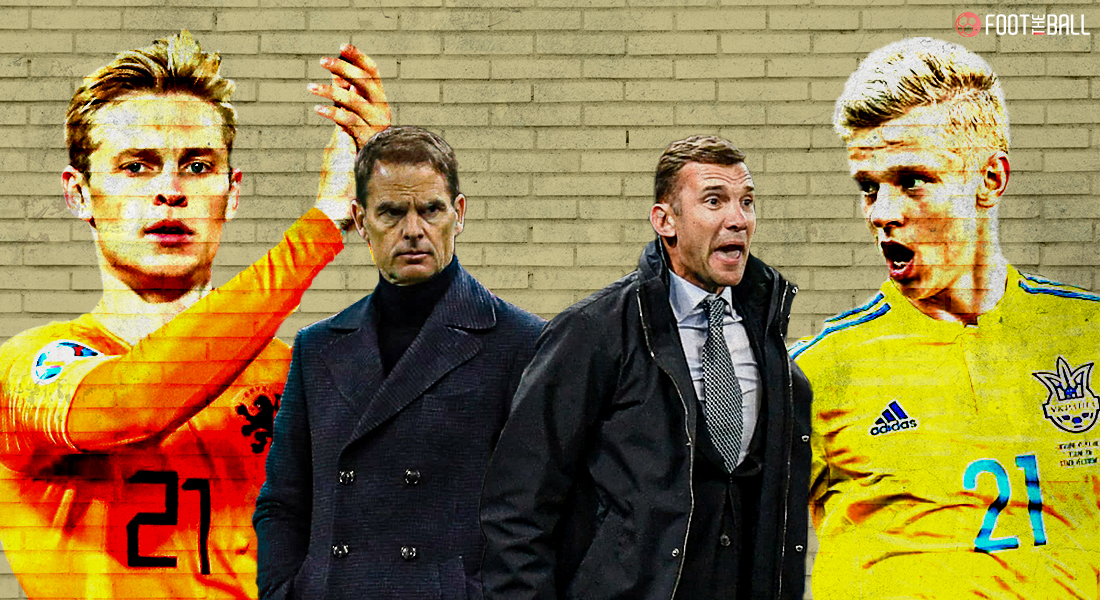 The Netherlands will make their long-awaited return to a major international tournament at Euro 2020 when they face Ukraine on Sunday at the Johan Cruyff Arena, Amsterdam.

After failing to qualify for Euro 2016 and the 2018 World Cup, The Oranje will be back in business on Monday and will want to kick off their Euro 2020 quest with a victory over Group C rivals, Ukraine. They have an additional edge over their fellow Group C opponents, as all three of their group matches are set to take place in the Dutch capital.

The Oranje have only lost one of their previous ten matches, although they have drawn four of them.

Last Sunday’s 3-0  victory over Georgia will have bolstered their morale, but De Boer’s squad would need to be crisp against a rising Ukraine side led by Andriy Shevchenko that did well to qualify and finish first in a group that included strong teams in Portugal and Serbia.

The Blue and Yellows went undefeated in all eight qualification matches, conceding only four goals and capped their Euro preparations with a 4-0 win over Cyprus last Sunday.

Ukraine won the inaugural Euro tournament sixty years ago and has finished second three times since as part of the Soviet Union. Although they have qualified for the last two Euros, they have not advanced past the group stages as an independent country but will be looking to do otherwise this time, beginning with a victory over the Netherlands.

The Netherlands have a quality roster, but the absence of Virgil van Djik might be costly. The defender has missed the majority of the season for Liverpool due to a knee injury, and ruled himself out of the Euros to concentrate on regaining fitness for next season.

They were also dealt another significant setback when Donny Van de Beek withdrew from the national team owing to a groin injury only days before the tournament.

Their other defender Matthijs De Ligt is also a doubt for the fixture against Ukraine due to a groin injury.

There are no injury concerns for the Shevchenko-led Ukraine side ahead of their match against Netherlands.

The tournament’s postponement offered Memphis Depay an additional season to recover amid concerns that he would struggle to play last summer due to a knee injury. This season, the Lyon man has been a revelation for his club, contributing 34 goal involvements (22 G, 12 A) in all competitions.

Depay’s adaptability reflects well on him as a player. His versatility as a scorer and playmaker differentiates him and enables him to play in a variety of positions. Leaving his dismal Manchester United days behind him when  he was fairly raw, the Dutchman has matured into quite a player. His dribbling abilities, positional awareness, and venom-infused shots from outside the box will be crucial not only in the forthcoming match, but throughout the tournament.

Andriy Yarmolenko is unquestionably the star of Ukraine’s national football squad. The 31-year-old has 40 goals for The Blue and Yellow and is only eight goals away from breaking his country’s all-time scoring record, which is presently held by his boss Shevchenko.

His ability to cut inside onto his preferred left foot very fluidly is a delight to watch, and his finishing is just brilliant. On Sunday, the Ukrainian talisman appears to be the most probable prospect to make a difference.

The Netherlands have underperformed under Frank de Boer’s leadership, and suspicions about his tactics and strategies persist. While Ukraine has been doing admirably well under Shevchenko’s leadership, Netherlands’ individual talent may provide them an advantage in this encounter. FootTheBall predicts Netherlands 2-0 Ukraine.