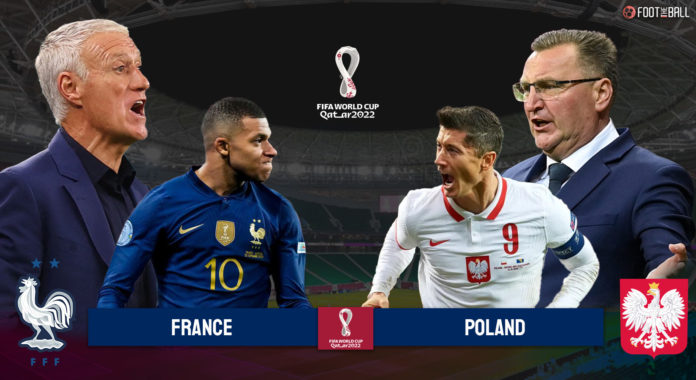 Well, even if France don’t defend their title in the 2022 FIFA World Cup, they at least broke the champions curse by becoming the first team since 2006 to qualify for the knockouts, safely winning the previous World Cup. Didier Deschamps’ men started their campaign strongly, thrashing Australia 4-1. However, their next match was slightly more difficult as they needed a superstar performance from Kylian Mbappe to see off Denmark.

With this result, France became the first team to qualify for the round of 16. This prompted Deschamps to experiment in the final match as he rested all his starting 11, barring Aurelien Tchouameni. Unfortunately, this backfired as Tunisia scripted a historic win over Les Bleus.

However, France’s star will be back when they take on Robert Lewandowski’s Poland, who qualified for the round of 16 by the barest margin. France are heavy favourites going into the match, but this World Cup has shown that on their team, any team can spring a surprise and win over the favourites.

Poland were drawn in a strong group which included Argentina, Mexico and Saudi Arabia. And before the start of the World Cup, many fans would’ve put money on Argentina and Mexico to go through. However, Poland started their campaign with an impressive draw against Mexico. Following this, they defeated Saudi Arabia 2-0 to go top of the group. Saudi Arabia had pulled off one of the biggest upsets in FIFA World Cup history after defeating Argentina in their first match.

So, after two matchdays, Poland were top of the group. However, their final match was against Argentina; a team re-energised by their 2-0 win over Mexico in the second match. A win was also necessary for Lionel Messi and Co. for qualification. And the two-time world champion came out all guns blazing, defeating the Poles 2-0. However, despite the defeat, Poland qualified for the knockouts, as they had a better goal difference (0) than Mexico (-1).

Poland vs France! God. With how France played today I am worried.

France tested their squad depth in the final group game as Didier Deschamps rested 10 of his starting 11 against Tunisia. However, the Africans won the match through a lone goal scored by Wahbi Khazri. The game, though, does not indicate their talent, as their starting 11 were on the bench for the match against Tunisia. Lucas Hernandez, who suffered a Cruciate Ligament Rupture, remains absent. On the other hand, Karim Benzema is continuing his rehabilitation and could play if Franze reach the semi-final.

Poland, meanwhile, face another stern test after the Argentina game. However, France are a side that is even more stacked with talent in all parts of the pitch. On top of that, their star Kylian Mbappe is also in top form and will be looking to exploit the weaknesses of France’s defence. France were time and again caught on the counter-attack against Tunisia, which will not be the case when their string defenders return.

When France won the 2018 FIFA World Cup, they had one of the best young players, Kylian Mbappe. The then 19-year-old was ruthless as he helped France win their second title. And four years later, he has become one of the best in the world and is in prime form. Mbappe has three goals and is the joint top-scorer till now. In fact, it was his brace that won the game for France. The striker has been further helped by the fact that Deschamps has deployed him to the left-wing position, which he loves and in which he is performing.

Poland’s best player is Robert Lewandowski, without a doubt. However, the striker has often failed to bring his best to the World Cup. He scored his first goal of the tournament against Saudi Arabia in the second match after failing to score any in the previous edition. However, despite that, manager Czesław Michniewicz will be hoping Lewandowski comes good against perhaps the best team in the world right now.

Well, if this World Cup has shown us anything, it is that no team can afford to relax. With favourites such as Belgium and Germany already eliminated in the group stages, every team will be cautious and looking to bring their best to the World Cup.

However, all said and done, Poland have been one of the worst performers and have barely shown any attacking impetus in any of their matches. And a game against France will be a bridge too far for them to cross.

FootTheBall predicts a 3-1 win for France.