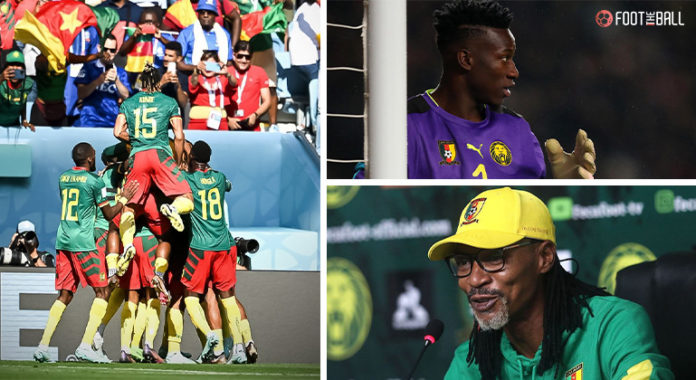 The FIFA World Cup witnessed perhaps its most entertaining game as Cameroon and Serbia shared the points in a 3-3 draw. The match was a typical end-to-end affair as Cameroon took the lead inside the first 30 minutes. However, Serbia came back strongly, scoring two goals in the injury time of the first half to go into the break with a 2-1 lead.

However, the Africans returned strongly in the second half to score two goals and level the match. While the game was impressive, the match also attracted attention for another reason: the absence of Andre Onana in Cameroon’s goal. The Inter Milan man is by far the best goalkeeper in the national set-up. Onana started in the first match against Switzerland but was dropped for the Serbia match.

In fact, Onana was not even named on the bench by manager Rigobert Song. This is even though Onana is neither injured nor serving a suspension. So, why was Andre Onana dropped from the squad altogether?

According to reports, after the 1-0 loss against Switzerland, manager Rigobert Song and Onan had a discussion regarding tactics. Song wanted Onana not to play long balls regularly and, at the same time, also not take risks near his goal, which would invite high press from the opposition team.

However, Onana disagreed with his manager’s views, and this caused a rift between the two. Even after the intervention of Samuel Eto’o, the President of the Cameroon football federation, the situation could not be resolved.

“The Cameroon Football Federation reiterates its full support to the head coach and his entire staff as they implement the Federation’s policy aimed at preserving disciplinary, solidarity, complementarity and cohesion within the national team.”

For the match against Serbia, Onana was replaced by Devis Epassy, who plays for the Saudi Pro League club Abha. And the gulf in class was visible as Epassy should have stopped Serbia’s first two goals.

The goalkeeper has now released a statement on his official Twitter account regarding the issue. In the statement, he said that while he was disappointed by the decision, he still respected it. He added that he tried everything he could to resolve the situation, but the other side had ‘no will’ to cooperate.

“I want to express my satisfaction to my country and the national team. Yesterday, I was not allowed to be on the ground to help Cameroon, as I always do, to achieve the team’s goals. I always behaved in a way to lead the team to success in a good manner,” the statement said.

I don’t know why Onana was sent back home but Devis Epassy is not doing a good job, Onana would definitely save both of these goals, or one at least
It’s a disappointing first half performance from the supposed Indomitable Lions of Cameroon.#FIFAWorldCup #Qatar2022 pic.twitter.com/k5g8UYOJVK

It continued, “I have put all my efforts and energy into finding solutions to a situation that a footballer often experiences, but there has been no will on the other side”.

However, Onana said that he respected the decisions of the ‘people in charge.

“The values that I promote as a person and as a player are the ones that identify me and that my family has given me since my childhood. Representing Cameroon has always been a privilege. The Nation first and forever”.

For more information on the 2022 FIFA World Cup follow www.online-betting.org.