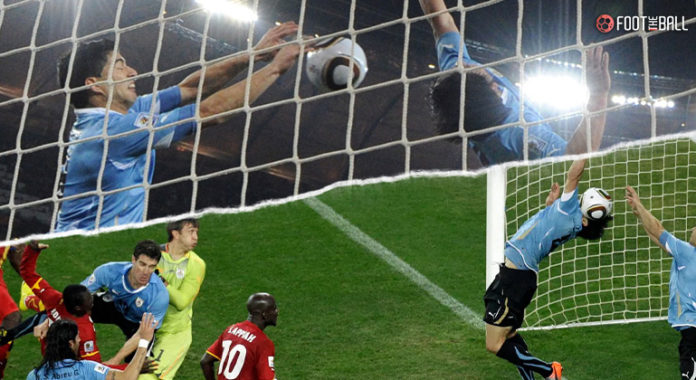 Ghana and Uruguay are bound to meet in a men’s FIFA World Cup again, and that incident from that night in 2010 is looming large on this fixture. So why not go back and face the elephant in the room?

It is Friday, July 2, 2010, and we are in Soccer City, ​​Johannesburg, South Africa. An African nation is hosting the men’s FIFA World Cup for the first time, and although the Bafana Bafana valiantly bid their farewell long ago, the whole continent is buzzing with the possibility of one of their own – Ghana – finally reaching the semifinals of this historic competition.

“We weren’t just playing for Ghana. We were playing for Africa,” Ibrahim Ayew, who started the fixture on the bench for the Black Stars, recently told The Athletic. “We could feel the whole of Africa behind us. We could feel it on our shoulders.”

The night ended with Luis Suarez writing another unforgettable chapter in the book of world cup controversies while notoriously saying: “The Hand of God now belongs to me” as well as catastrophically, traumatically breaking the hearts of Ghana and Africa.

What happened with Suarez’s handball vs Ghana?

There was chaos. There was clutter. There was confusion. And there was a cluster of people shouting in the ear of referee Olegario Benquerenca, deep in extra time.

Moments earlier, while the game was tied at 1-1, the Black Stars had won a free-kick in their attacking half. Anarchy ensued in La Celeste’s box as the Uruguayans made a mockery of clearing John Painstil’s delivery, which was whipped into a dangerous area.

Incomprehensible things happened, including Suarez, who stood on the goal line, denying Stephen Appiah’s shot from entering the goal with his knees, until the ball reached Ghana substitute Dominic Adiyiah, who also headed it goal-bound, this time to be punched away by the bare hands of Luis Suarez.

All hell broke loose as Suarez was shown a red card and Ghana were awarded a penalty.

Eventually, Asamoah Gyan, having already successfully slotted two spot-kicks in the campaign, stepped up to take the penalty, only to rattle the crossbar with his attempt. A tearful Suarez, as if applying salt to Ghana’s bleeding wound, celebrated the miss euphorically.

Ultimately, Ghana lost 4-2 on penalties to Uruguay.  To date, no African nation has reached the last four of a men’s FIFA World Cup.

“What they did to us in South Africa was crazy… It feels like we, and African football, were robbed of a historic journey. It just burned deeper than anything you can imagine,” Kwesi Appiah, Ghana’s former striker, recently said in the press.

Suarez, however, remains unapologetic regarding his actions and the entire matter. “It wasn’t my fault because I didn’t miss the penalty. I don’t apologise for it. I apologise if I injure a player but I took a red card for the handball,” the 35-year-old said on the record.

There is little wonder that a Ghanaian journalist told Suarez in the press conference that many people in Ghana view him as “the devil himself.”

“Ghanaians want revenge,” said Gyan, who, of all people, would’ve felt the brunt of the pain from that defeat. “When the draw was made and they saw Uruguay in Ghana’s group the only thing that came into mind was revenge,” he told the BBC.

The president of Ghana, Nana Akufo-Addo, echoes the emotions of his people. “They are going down! We’ve had to wait for 12 years to get revenge against Uruguay — and we assure them that this time the hand of Suarez will not save them against the Black Stars of Ghana,” he said recently.

“We believe it will be revenge time. It is important that we all set the record straight,” Kurt Okraku, Ghana Football Association’s president, had also chipped in when the draw was announced.

The way the group has played out means that when the two teams clash on Friday, the Black Stars will have the opportunity to make their 12-year-long revenge even colder as beating La Celeste will ensure that the latter are eliminated while Ghana go through to the last 16.

The noise coming out from the Black Stars themselves, however, is not centring on the notion of revenge. Captain Andre Ayew, the only player in the current squad who was also part of the 2010 Ghana squad, said the upcoming game “is not a matter of revenge.” He added: “It’s more a question of us getting to the next stage.”

Otto Addo, Ghana’s manager, stated that for him the match against Uruguay is only “a normal game.” He continued: “I was really sad in 2010 when that incident happened and we missed our chance to proceed to the semis. But it is 12 years ago and Friday will be a different match with a different approach,”

On the same page as his coach and captain, midfielder Thomas Partey conclusively said: “History is always there. Everyone was very sad at the time. It was very difficult. This is a new generation. We have another chance and we have to forget what happened. This is a new time.”