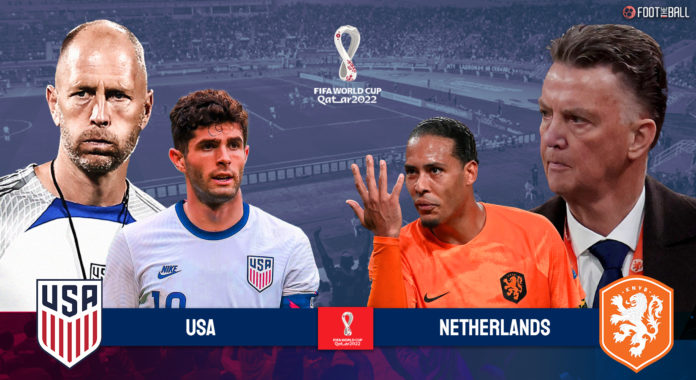 The returnees after a hiatus of 8 years, Louis van Gaal’s Netherlands and Gregg Berhalter’s USA will go against one another in the pre-quarterfinals of the world cup on Saturday at the Khalifa International Stadium in Ar-Rayyan, in what will be their first-ever competitive meeting.

Small fishes tumbling over the sharks of the pond has been a common trope of the world cup in Qatar, but the Netherlands have emerged scratch-free from Group A and into the business end of the tournament. They’ve now extended their unbeaten run to 18 games.

Van Gaal has heavily prioritised the stability of his team’s defensive shape, and his three-man defence, spearheaded by Virgil van Dijk, was breached only once in the group stage.

However, when judging the Oranje, it is imperative to keep their style of play on an equal pane as their final outcomes, and the sailing has not been as smooth as desired on that front. Across three games, although they’ve scored 5 goals, their xGs of 0.7, 0.1, and 1.6, versus Qatar, Ecuador, and Senegal respectively, as per FBref, tell a different story.

Playing a flowing style of passing football has not been feasible, especially in the first two matches. A lack of potent combination play from an unsettled forward line, courtesy of Memphis Depay’s absence, has not helped Netherlands’ case.

The Oranje’s solution usually has been to look towards Frenkie de Jong to break through the opposition lines or Cody Gakpo to make something happen out of thin air on the attacking front.

Yet, the performance in the Qatar game coupled with Depay’s improving fitness would offer confidence going into the last 16.

The USA, on the other hand, weathered a mountain of a storm at the end of the Iran game to qualify for the next round. On an overall aggregate, the USA perhaps has been the better team in all the games that they’ve played, and have been rightfully rewarded for the same.

The Yanks’ midfield potency and dominance have been a surprise element for many, as exemplified in the game versus England, where the trio of Weston McKennie, Tyler Adams, and Yunus Musah – completing 101 passes amongst themselves – overpowered their opposition.

While the midfield has been the USA’s engine oil, goalscoring has busted like a flat tire. Netting just 2 goals, they’ve underperformed their xG of 2.5. If the Yanks want to reach the last eight for the first time in 20 years, they will have to address their lack of sharpness in front of the goal.

Injury-wise, the Dutch are in a happy place, and Depay getting his first start in the Oranje’s last game, having built up his fitness off the back of a serious injury, is a good omen for his team.

Although Matthijs de Ligt got the nod over Justin Timber in the first match against Senegal but leading into the tournament, it was Timber who was regularly featured in place of de Ligt, and once again, that balance has been restored.

Pulisic, having gotten injured in the process of scoring his goal, felt dizzy after the game and was taken to the hospital as a precaution. Optimistically for the Yanks’ fans, from the hospital, he posted on social media: “I’ll be ready Saturday, don’t worry.”

Besides that, like the Netherlands, the USA should have all their options available to them.

Cody Gakpo has been writing most of the Dutch headlines, and van Gaal’s side would not want him to stop come the knockouts.

Arriving into the world cup, the eyes of big European clubs with big bank balances were on the 23-year-old, and now there’s a shine of desire, of want in those eyes because the boy has bamboozled. With three goals of three types – a header, a left-foot strike from outside the box, a right-foot strike from inside the box – Gakpo is the tournament’s joint-leading goalscorer, at the time of writing.

He drops deep, he makes intelligent runs into the box, he is conducive to close-knit connectivity play, and he likes to dribble. The Dutch DNA in him is drooling. Berhalter and co need to be wary.

On the other hand, the Yanks have encountered the meanest problems in the final third, and it is their Captain America, otherwise known as Christian Pulisic, who is their greatest hope-bearer.

The Chelsea man is leading the USA’s charts for xA (0.53) and sits second in the list for the highest xG (0.59) while, in material terms, it was his heroic finish of the well-constructed move against Iran that has carried Berhalter’s USA in the knockouts.

The intensity at which the respective teams have played their games means that the USA have spent an ocean of emotions while the Netherlands perhaps have more gas in the tank. Moreover, with minutes now under Depay’s belly, he and his team are likely to step it up a gear while the USA’s problems in front of the goal might come back to bite them against a stout defence. FootTheBall predicts a 1-0 win for the Netherlands.