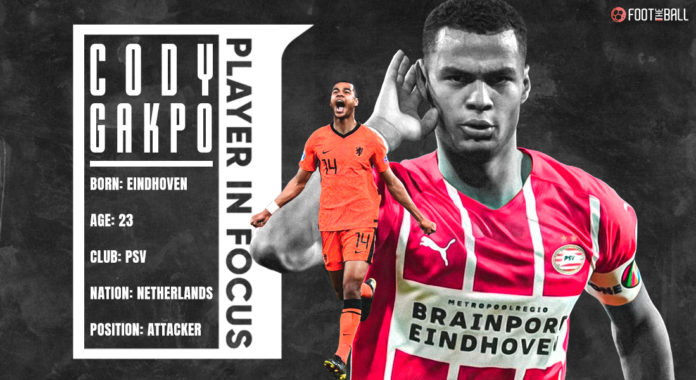 The Netherlands have always been one of the foremost producers of young talent. Ajax are the leaders in producing future superstars at an incredibly rapid rate. However, their competitors are also not too behind. PSV have developed world-class facilities themselves and are hot on the heels. Their latest offering is 23-year-old attacker Cody Gakpo.

Gakpo is a local kid who came up through the ranks of PSV to break through. At such a tender age, he is already the captain under Roger Schmidt. Like his current teammate Noni Madueke and former Mohamed Ihattaren, there is great hype around the future of Cody Gakpo.

Manchester United are heading the queue of the clubs keeping tabs on him. Therefore, it is easy to see that there is sure promise in Gakpo’s game and how he can develop further.

Cody Gakpo has shown some great signs of why he is so sought after. He is able to play across the different attacking roles. Gakpo’s favoured position is either the left wing or playing as the lone striker in PSV’s 4-2-3-1. However, no matter where he starts the match, Gakpo is extremely fluid in his movements.

He can be found either running fast with the ball or ghosting into the penalty box. Having become a regular in the first team since 2018, Gakpo enjoyed a career year in the 2020-21 season. 12 goals and 13 assists in 27 games across all competitions told a story. He scored or assisted every 76 minutes in the league. PSV has always given its youngsters chances so it is no surprise to see Gakpo shining for some years now.

PSV fought against Ajax for the league title till the end of the season but ultimately fell to the Amsterdam side. Gakpo, however, had truly arrived.

As mentioned above, Gakpo emerged as one of the stars in the Netherlands last season. After being at the top of the charts for PSV in both goals and assists, he has started this season on fire. Gakpo scored twice to give PSV a 4-1 win in their first game with a certain Ruud van Nistelrooy as manager.

Gakpo’s raw numbers have already been told. However, his underlying stats show an even better picture. It proves how his raw numbers aren’t down to luck or outliers. Gakpo deserved every accolade that came his way last season.

However, his passing accuracy can certainly improve from the current 77.3%. So can his shooting accuracy, having scored eight goals from 60 shots taken. Gakpo is a keen dribbler, completing more than half (58.4%) of his dribbles throughout the season. PSV have nurtured his talents well, giving him full creative freedom in order to get the best player.

7+7 – Cody Gakpo is the first @PSV player to fire seven shots and create seven chances in a single Eredivisie game since Dries Mertens in 2011. Diamond. pic.twitter.com/92VZ98pkcB

Cody Gakpo has shown that he can be trusted with responsibility, leading a team mixed with youth and veterans. Ajax are under new management this season. Moreover, they have lost many players. Lisandro Martinez to Man Utd, and Ryan Gravenberch to Bayern Munich, particularly, are moves that have weakened them considerably. If Gakpo becomes the talisman of a league-winning side this season, he would truly arrive as a superstar. For that to happen, however, he would need to stay at PSV, no longer a guarantee.

To say that Gakpo’s performances have come as a surprise will be wrong. He had been a regular with the U19s Jong PSV since 2015. Cody Gakpo had seven goals and five assists in 2016 with the U19s before being promoted to the reserves.

He immediately seized the moments, scoring twice and assisting once in just his second match. Gakpo finished the 2017-18 season with seven goals from 12 games.

The 19-year-old winger is a superstar in the making! pic.twitter.com/XdvOvcXfZ5

It was clear that his first-team bow was not far away. Gakpo had a tough time in 2018-19 with PSV but managed to score 10 times for the reserves. It was in 2019-20 that Gakpo finally showed his true prowess with seven goals and assists each in the Eredivisie. Therefore, the progression through his career is clear.

It is clear that the arrival of Schmidt in 2020 also helped massively. Gakpo has been improving leaps and bounds which means it’s only a matter of time before European giants come.

Eredivisie has become a happy hunting ground for European elites recently. The list of best young players in Eredivisie to be of interest to them is long. Gakpo was expected to move this summer. However, he recently signed a new contract which tied him to the club till 2026. This will endear him to PSV fans. With the new contract, Gakpo is guaranteed to fetch a huge price in the market, if a sale happens.

Gakpo’s one of the names in the list alongside priority target Antony – no official bid yet. pic.twitter.com/LdAZaRoLAJ

Manchester United have registered their interest after reportedly failing to secure Antony from Ajax. Gakpo’s positional versatility is an asset that could be useful to a United squad down to bare bones. Cristiano Ronaldo’s transfer saga shows no signs of ending and Martial’s injury has made Red Devils desperate. Gakpo would relish the chance to test himself against higher-quality opposition. However, he can’t be a loser in any scenario.

If the move doesn’t happen, Cody Gakpo will have the opportunity to put up even more ridiculous numbers for PSV in the 2021-22 season. He might end up as a league title winner too. Next summer, ideally armed with a boatload of goals and assists and a league title, the sky will be the limit for Gakpo.

And if he does move, Gakpo has shown so far in his career that he is not afraid of new challenges. Taking back United to their perch will be the biggest of his career, but he would back himself to play a big part in it.