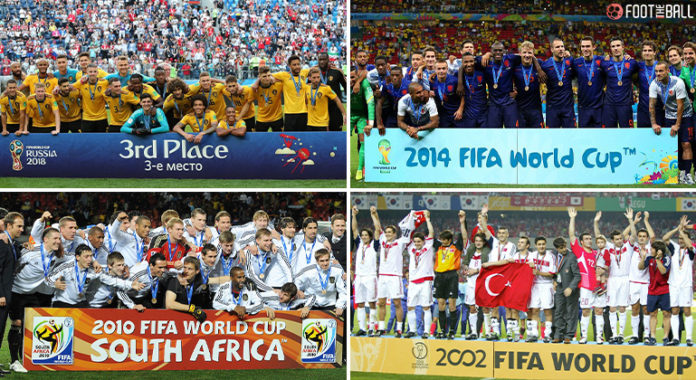 The players of Croatia and Morocco would have been dreaming of playing the World Cup final at the Lusail Iconic Stadium on Sunday before going to bed on Monday and Tuesday night respectively. But as it happened, the valiant-but-dejected stars of their nation will have to muster some willpower as they will be playing on Saturday at Khalifa International Stadium in the third-place play-off.

FootTheBall dives into the significance and history of this – more or less – obligatory fixture that decides the battle for the bronze medal.

What is the importance of the third-place play-off?

After an emotionally and physically laborious month of all-or-nothing football, four out of the chosen 32 have a decidedly realistic chance to lay their hands on the gilded treasure. Events transpire, and in the blink of an eye, the hearts of half of the semi-finalists are shattered.

Broken and fatigued, a day before the final, these two fallen teams are obligated to fight it out in the bittersweet spectacle that is the third-place playoff, which is frankly bitter in more parts than it is sweet.

Seen as an unnecessary exertion of exhausted teams as well as a reminder of their grand failure at the penultimate step, many people are of the opinion that this fixture takes away more than it adds to the world event. “I think that this match should never be played,” voiced Louis van Gaal, the recent Netherlands manager, before his team’s bronze-medal match against Brazil in 2014.

“I have been saying this for the past 10 years. We will just have to play the game, but it is unfair. We will have one day less to recover and that’s not fair play. The worst thing is, I believe, there is a chance that you lose twice in a row in a tournament in which you’ve played so marvellously well. You go home as a loser because possibly you’ve lost the last two matches,” he said at the time.

It's the end of our journey in the World Cup. Hope we can get the third place 🥉🇲🇦 pic.twitter.com/escJtq5jQF

But, if looking from the other side of the coin, for underdog teams who are not expected to win World Cup but go on fairly tale runs, the matter of finishing third or getting the chance to take the field one last time in a special tournament holds a lot of significance and emotion, as it did for Turkey and South Korea in 2002, Croatia in 1998, Sweden in 1994, or Uruguay in 2010. As it will for Croatia but perhaps even more for Morocco come Saturday.

Moreover, once the starting whistle is blown, football does what football does, and meaning is added to the match by the spectacle of two sets of 11 highly-trained and talented players trying to put a ball in their opposing net more number of times than their competitors.

History and facts about the third-place play-off

In the 2002 men’s World Cup in Japan and South Korea, Turkey embarked on a fantasy run, quickly becoming the people’s favourites before they met Brazil in the last four. The co-hosts, South Korea, albeit in deep controversy, triumphed over Italy and Spain but were halted by the Germans in the semifinals.

The rendezvous of the dark horses did not disappoint as the game produced a bundle of goals. As mentioned earlier, Şükür netted the fastest goal in a men’s World Cup but Guus Hiddink’s side equalised through a freekick. However, Ilhan Mansiz responded with a brace before half-time, although the Taeguk Warriors gave the strong home crowd some consolation by getting one back in the dying minutes of the game.

Óscar Tabárez’s Uruguay were applauded for their staunch defending even if it meant that their attacking potential was restricted. But in the bronze-medal match against Joachim Löw’s developing-but-impressive German side, these shackles were broken, and we were treated to a genuinely exciting World Cup game.

In an end-to-end, topsy-turvy fixture, Thomas Müller disturbed the deadlock before La Celeste roared back through Edison Cavani and Diego Forlán. However, the Germans had the last word as Marcell Jansen made it 2-2 before Sami Khedira won it for them deep in the second half.

The match ended with Forlán, the player of the tournament, rattling the bar with his sumptuous free-kick but couldn’t stop Die Mannschaft from clinching the third-place for the fourth time in their history.

While a 17-year-old Brazilian sensation who went by the name of Pelé was opening up a different dimension in the world of international football during the 1958 men’s World Cup in Sweden, there was another man who was doing things of great wonder in that edition – the Moroccon-born French striker, Just Fontaine.

There was only one cup, and Pelé’s Brazil had to be rightfully rewarded with it but Fontaine, who had scored 39 goals for his club Reims that season, took the advantage of the third-place play-off against West Germany to snatch the remaining headlines.

In the joint-fifth highest scoring men’s World Cup goal-gala which that game was, or in other words, a goalkeeper’s fever dream, Fontaine scored four times all by himself, taking his tournament tally to 13 and becoming the highest goalscorer in a single FIFA men’s World Cup.