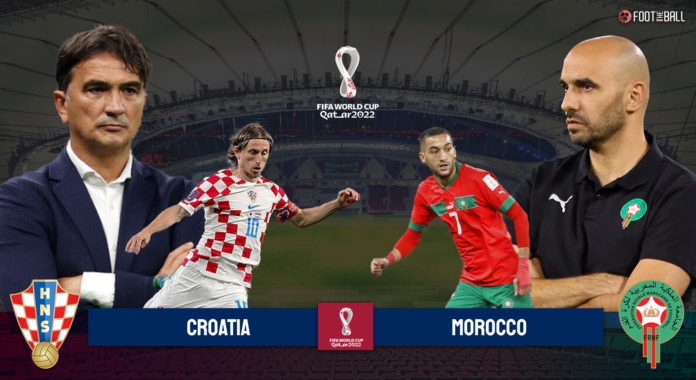 The rise of Croatia in football since their independence in 1991 has been nothing short of a miracle. Since the 1998 FIFA World Cup, the Vatreni have reached three semi-finals, with only France and Germany reaching the final four more times. After reaching the 2018 World Cup final, Croatia again made a deep run into the tournament.

Despite this, there was an even more significant underdog at the World Cup. Morocco were having a fairytale run of their own in just their sixth World Cup, surprised everyone by beating the likes of Belgium, Spain and Portugal to reach the semi-finals.

However, their dreams of reaching the final were crushed by France, who finally broke the stubborn African defence by scoring two past them. This defeat must have been devastating for the Atlas Lions; however, they can go with their head held high. They now have the chance to end the tournament on a high when they face Croatia in the third-place playoff.

Like Morocco, Croatia’s dreams of reaching consecutive finals were crushed by a Lionel Messi-inspired Argentina. Playing against the South Americans, Zlatko Dalic’s men were left chasing shadows as they succumbed to a 3-0 loss, with Lionel Messi scoring one and assisting another. After the match, Croatian captain Luka Modric said that Messi was the best player in the world and wished that the Argentine wins the trophy.

And over the years, the third-place playoff has seen some brilliant matches, such as Germany’s 3-2 win over Uruguay in 2010 and the Netherland’s 3-0 thrashing of Brazil in 2014, which came days after Germany had humiliated the Selecao 7-1.

With nothing much to gain, teams over the years have given their bench strength to shine, which could be the case when the two teams face the Khalifa International Stadium.

Croatia ended the game against Argentina with two yellow cards, which were handed out to goalkeeper Dominik Livakovic and midfielder Mateo Kovacic. However, since all previous yellow cards are suspended in the semi-final, the duo will be available for selection.

However, manager Zlatko Dalic could turn to his substitute’s bench with nothing to lose. There are talented young players on the bench, such as Red Bull Salzburg’s Luka Sucic and Rennes’ Lovro Majer. Other players that could be given a starting role are Bruno Petkovic and Mislav Orsic.

Morocco took a gamble when they named the defensive duo of Romain Saiss and Nayef Aguerd when they were not fully fit. While Ageurd didn’t start, Saiss was substituted after 20 minutes. It is highly unlikely that coach Walid Regragui will risk them against Croatia. This could mean that Badr Benoun could come in place of Saiss, or the team could switch to a four-man backline.

At the age of 37, Luka Modric has just shown at the biggest stage that he is a generational talent. Acting as the perfect orchestrator, Modric controlled the flow of Croatia’s game and helped them in difficult situations throughout the World Cup. Croatia have played seven knockout matches in the last two World Cups, out of which four have gone to penalties. And Modric has been critical in these last moments when the teams are on their last legs keeping sure the game’s flow is in Croatia’s favour. And the Vareni will hope they can send their legend to a happy retirement with a final win.

Morocco have been a team based on collective strength rather than individual brilliance. However, if one had to pick a game-changer, it would surely be their goalkeeper Yassine Bounou who has been the most in-form goalkeeper at the tournament. He kept clean sheets against the likes of Belgium, Spain and Portugal, and it needed the best from Kylian Mbappe to finally get the ball past him. However, Croatia do not possess the same attacking arsenal as France, making their job much harder.

This match might be one of the most closely fought on paper as both teams excel in dragging their opponents through 120 minutes before defeating them in the penalty shootouts. Both teams are built on a solid defence with impressive shot-stoppers.

So, it is likely that this match will go to penalties.

FootTheBall predicts a 1-1 draw, with Croatia winning 3-2 on penalties.