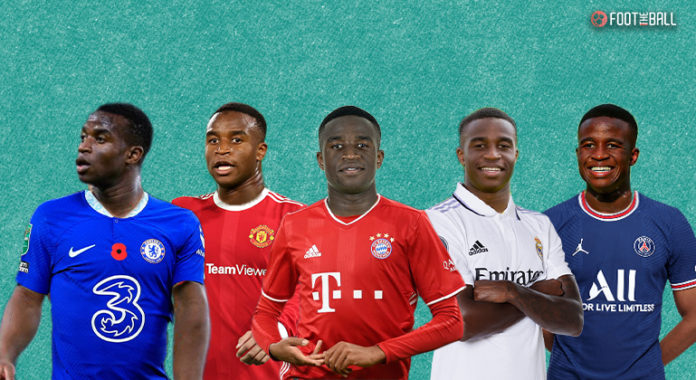 Germany’s 2022 FIFA World Cup campaign was a wreck. The four-time world champions were knocked out for the second straight tournament. It is challenging for Germany to take any positives from their dreadful outing in Qatar. This also marks the end of the last of Germany’s golden generation that won the 2014 World Cup. Now it is time for a new generation to take over. And 18-year-old Youssoufa Moukoko will be integral to Germany’s new look.

The teenager who made his debut on November 20, 2021, at 16 years and 01 day, becoming the youngest player in Bundesliga, has come a long way. In the current season, Moukoko has scored six goals and provided four assists in 14 matches, leading to his selection in Germany’s World Cup squad.

His talent is there for all to see, which means top clubs will come for him sooner rather than later. In addition, Borussia Dortmund is also a feeder club that has regularly sold their top players. FootTheBall brings you the top five ideal landing spots for Youssoufa Moukoko if he leaves Borussia Dortmund.

One of the best transfer deals Bayern Munich have done was that of Robert Lewandowski. The Pole joined Bayern Munich in 2014 for free. However, Lewandowski is gone, and while they have replaced him with the impressive Sadio Mane, the Senegalese is already 30 years old. And in Youssoufa Moukoko, they will have a player that can perform at the top level for more than a decade at the very least.

In addition, Bayern have an experienced world-class roster that will help in adjusting Moukoko to the level of the club. The 18-year-old will also find adjusting easier as both teams play in the same league.

Apart from Eric Maxim Choupo-Moting, Bayern Munich also lack a proper number nine. And with veterans such as Thomas Muller getting old, a player of Youssoufa Moukoko calibre will ensure Bayern make a smooth transition to the next generation.

118 – Youssoufa #Moukoko has scored a goal on average every 118 minutes in the #Bundesliga, among German players with 10+ BL goals only Gerd Müller (105) and Rüdiger Mielke (90) have a better minutes per goal ratio in the league’s history. Nominated. pic.twitter.com/E8r5rEmQJL

To say that the current season has been a disaster for Chelsea would be an understatement. After spending over € 250 million in the 2022 summer transfer window, the Blues endured a horrid start to the season, which led to the sacking of manager Thomas Tuchel. This all happened after long-time owner Roman Abramovich was forced to sell the club.

Chelsea, like Bayern, also operate without a proper number nine. However, unlike the Germans, new manager Graham Potter still needs to get consistent performance from his players. And Youssoufa Moukoko will be a perfect addition to the Chelsea setup.

They have already added Red Bull Leipzig’s Christopher Nkunku, who will join the team in July 2023. And if they can add Moukoko, then Chelsea’s attack could finally challenge for titles.

After a disastrous start to their season, Manchester United have recovered brilliantly. Under new manager, Erik Ten Hag are now just three points adrift of fourth place. However, things are still far from perfect. Jadon Sancho’s form has dropped down massively, while Antony, and Anthony Elanga have to get up to form.

And while Marcus Rashford is in prime form, Ten Hag knows that he is still far behind in terms of quality when compared to Europe’s top clubs. However, players like Moukoko will help them bridge that gap.

He will also lessen the burden on Rashford, which will come in handy when the club are fighting in multiple competitions for trophies.

The Spanish and European champions are already planning for the future. With Vinicius Jr becoming an integral part of Los Blancos, the team is now looking at strengthening different positions. Aurelien Tchouameni has been added to provide steel in the midfield whole. They have also completed a deal that will bring Brazilian teenage sensation Endrick Felipe to the club in 2024.

And a Youssoufa Moukoko transfer will ensure that Real Madrid has a new generation of players that will take the mantle forward from the current generation. Moreover, Real Madrid also play a style similar to Dortmund, which will help the teenager settle quickly with the club’s tactics.

Real Madrid have already struck gold with the likes of Vinicius Jr, Rodrygo and Eder Militao, so there is no reason to doubt that they can’t turn the German into a future star.

One of the most significant issues at Paris Saint Germain this season has been Kylian Mbappe’s reluctance to play in the centre-forward opposition. He has repeatedly expressed his desire to play the left wing currently occupied by Neymar. However, with news emerging that the club might be willing to sell the Brazilian, the club will need a striker.

Youssoufa Moukoko could be that player. At just 18 years, they will get a player that can give them years of world-class football. And if Kylian Mbappe eventually leaves the club after his contract expires, they will have a player in Moukoko around whom they could build their team.