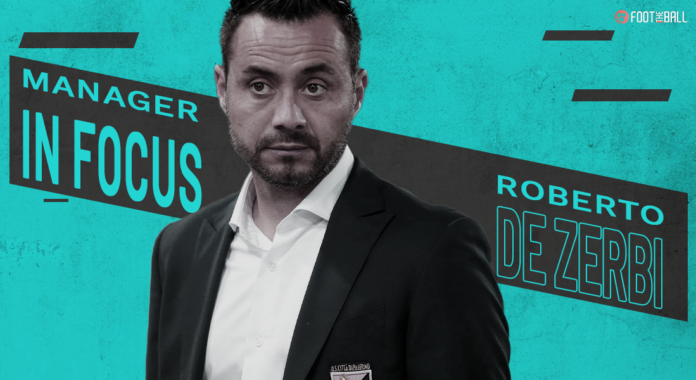 If you follow football and always seek young innovative coaches in the game with distinguished vision, the name of Roberto De Zerbi probably comes quite high on the list.  With that, the search for Graham Potter’s successor was over. Brighton & Hove Albion appointed Roberto De Zerbi as their new head coach on a four-year contract.

De Zerbi was Tony Bloom’s number one choice to replace Potter. The Seagulls had to act quickly with Juventus said to be considering sacking the struggling Massimiliano Allegri in favour of De Zerbi. The 43-year-old made his reputation at Sassuolo with some thrilling football and impressive scalps against Serie A giants during his three-year spell. He left the club in 2021 before taking over the reins at Champions League regulars Shakhtar Donetsk, but his stint in Ukraine was cut short by Russia’s invasion of the country.

Bloom had seen his side begin their league season brilliantly with four wins and a draw from six matches, but that stability was rocked when manager Potter was targeted by Chelsea. De Zerbi took over a Brighton side that were fourth in the Premier League. After a thrilling 3-3 draw against Liverpool at Anfield, it looks like Brighton have appointed another managerial wunderkind!

We are delighted to confirm the appointment of Roberto De Zerbi as the club’s new head coach! 🤝 pic.twitter.com/tNoNZfFaxQ

A superficial glance at Roberto De Zerbi’s career thus far would present a misleading image of one of the most exciting young managers in Europe and Brighton should consider themselves lucky to land the Italian ahead of the likes of Juventus.

Who is Roberto De Zerbi?

The 43-year-old Italian has had quite the journey to reach the Premier League. He started out with Serie D amateurs Darfo Boario in 2013. A year later, he took over Foggia in Serie C. He won the Serie C Cup and reached the promotion playoff final in his first season in charge.

In the summer of 2016, De Zerbi turned down an approach from Serie A side Crotone in favour of remaining loyal to Foggia. That loyalty will no doubt appeal to Bloom, having seen Potter and his entire coaching team walk out at the first sign of a job at a bigger club. De Zerbi was sacked by Foggia after a disagreement with the board. De Zerbi’s next destination post-Foggia was Palermo. It was not a good first experience of Serie A as he oversaw a seven-game losing streak and failed to win a home game for three months.

Whereas Bloom and Brighton have a track record of giving managers time to overcome such barren spells, De Zerbi was sacked. Palermo’s impatience proved to be Sassuolo’s gain when they appointed De Zerbi as their new boss in the summer of 2018. With a small budget, he led the club wonderfully nicknamed the Watermelon Peel to consecutive eighth-placed finishes in Serie A.

De Zerbi’s team collected the most points and scored the most Serie A goals in Sassuolo history. They missed out on Europa Conference qualification on goal difference to Roma at the end of that campaign. De Zerbi had already announced it would be his final season with Sassuolo as he would take over Ukrainian giants Shakhtar ahead of 2021-22.

Brighton fought off Juventus for Roberto De Zerbi. Let that sink in for a minute.

De Zerbi won the Ukraine Super Cup early in his reign and his side were top of the table when Russia launched its illegal war on the country in February 2022. He was widely praised for remaining with Shakhtar despite the invasion, leading the club on their Global Tour for Peace which involved playing friendlies against sides from Greece, Turkey, Poland and Croatia.

If De Zerbi can survive and thrive in a war-torn country, then the pressures of the Premier League should be a walk in the park in comparison. All of De Zebri’s coaching staff left Shakhtar with him. His backroom team at the Albion is set to be made up of those he worked with so successfully in Ukraine and with Sassuolo.

De Zerbi favours a 4-2-3-1 formation. It is the wide forwards who are crucial to the way he plays. Potentially good news for Leandro Trossard, who has already made his mark in a De Zerbi side, hitting a hattrick against Liverpool.

Going forward, De Zerbi likes the three players behind the lone striker to join the attack. The two fullbacks then push into midfield alongside the two holding players. It becomes almost a 2-4-4, which would appear to guarantee plenty of entertainment. Such desire to attack means that a De Zerbi side take frequent shots from inside and outside the area. Sassuolo hugely outperformed their xG, which is a far cry from the Albion under Potter.

Even in periods where the opponent has consolidated possession, Sassuolo sustain pressure in an attempt to complicate the opponent’s build-up. This is similar to other pressing sides where the intensity increases in wide areas to exploit the defensive utility of the touchline.

To sustain such pressure, they must consistently play a high line to maintain compactness, although this runs the risk of allowing space in behind. Nevertheless, the motivation behind this pressing stems from a desire for possession, a knowledge of how effective build-up patterns can break down a solid defence, but also cognisance of their own defensive deficiencies.

Roberto de Zerbi is excellent at developing younger players, increasing their value and making them much smarter footballers. Sassuolo had that model and so do Brighton. It is the perfect move for both parties.

De Zerbi also has a proven track record of improving individuals. Three of his Sassuolo players were part of the Italy squad that won Euro 2020.

Manuel Locatelli was signed by De Zerbi and turned into an Italian international under his management. Forward Domenico Berardi was already a Sassuolo player when De Zerbi arrived, helping him into the national team.

Giacomo Raspadori meanwhile was given his professional debut by De Zerbi at the age of 19 in 2019. Within two years, Raspadori made his Italy debut and is now considered the future of Italian football. It is this ability to unlock potential that makes De Zerbi such an exciting coach.

De Zerbi looks in many ways to be the perfect fit for Brighton. He is young, dynamic, tactically flexible and plays a possession-based style of football which should suit the squad built by Potter well.

Where Bloom’s appointment of De Zerbi as Brighton manager is unusual is that he appears something of a fiery character. The Italian is very particular in his requirements and wants to see his teams play in a certain way and nothing less. He always tries to adjust his players’ abilities to his strategy and get the most out of both, but wouldn’t change his principles for the sake of putting certain players under the spotlight.

He might adjust the starting XI according to the opposition, but he never stays away from his style of play and always relies on his usual tactical approach in his aim to expose the opponents. Roberto De Zerbi undoubtedly is one of the most promising coaches in modern football and his philosophy will transform Brighton into the opponent that no one should underestimate.