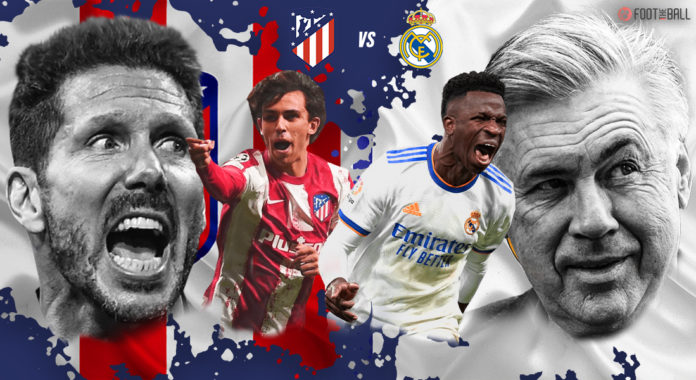 The 2022/23 season is well underway and teams have started to hit the 2nd gear. La Liga looks to be the most competitive league this season, with smaller teams involved in giant killings. The upcoming match in the Spanish league looks to be another thriller with La Liga’s first capital derby on show.

Atletico Madrid will host their city rivals Real Madrid at the Wanda Metropolitano Stadium. Both teams faced German opposition in midweek in their Champions League clash with contrasting results.

Diego Simeone’s men faced Bayer Leverkusen where they lost 2-0 to the German opponents. Meanwhile, Los Blancos faced struggling RB Leipzig and put on a complete performance brushing aside the Red Bull outfit for a similar scoreline. Real Madrid will be looking to increase the gap on Atletico Madrid after their La Liga clash on Sunday. However, the hosts will be eager to prevent that as they will surely want to keep their upcoming opponent close.

The last time the two teams faced off against each other, Atletico Madrid came away as 1-0 winners. It was a match played at Estadio Wanda Metropolitano back in May 2022 in the La Liga. This time around, things look a bit different and Carlo Ancelotti’s men would be hopeful of keeping their winning run intact.

Diego Simeone and Atletico Madrid are short on defensive options for the derby. Savic, Gimenez and Reguilon are all out for the match against Los Blancos after suffering recent injuries and won’t be available till the start of next month.

Real Madrid have their talisman out on the sidelines. Karim Benzema is out with a knee injury he suffered and will be out for another couple of weeks. Another player that is unavailable for the capital derby is Lucas Vazquez who also is out till the start of October.

Recent form in La Liga suggest that Atletico Madrid might be relying on in-form Antoine Griezmann when it comes to scoring in the upcoming match. The French forward was recently under the spotlight regarding his release clause from Barcelona when it comes to meeting certain criteria.

Regardless, his impact from the bench has helped Atletico time and again since the start of the season and Simeone would be counting on him once more. With 2 goals so far from the bench, the former Barcelona striker will once again be the man under the spotlight.

On the other side, Vinicius Junior has been one of the decisive players from Real Madrid recently. With Benzema out, Ancelloti has had to depend on the young Brazilian, and Vinicius’ numbers prove that he is capable of being their main man.

This season, the former Flamengo winger has 4 goals and 1 assist in just 5 appearances. He has time and again shown that age is just a number and Real Madrid will be counting on him for one of their premature title deciders.

Real Madrid head to the home of their arch-rivals as the only side with a 100% record in Europe’s top five leagues in 2022/23, looking to win their opening six league games of a season for the first time since 1987.

Los Blancos will need to be at their very best if they want to continue that record at the Wanda after picking up just one win in their last five away games against Atleti, failing to score in three of those five meetings. Carlo Ancelotti also has a poor record against Diego Simeone, losing four of his six meetings against the Argentine. This match does not promise an all-out approach and FootTheBall predicts Atletico Madrid 1-1 Real Madrid