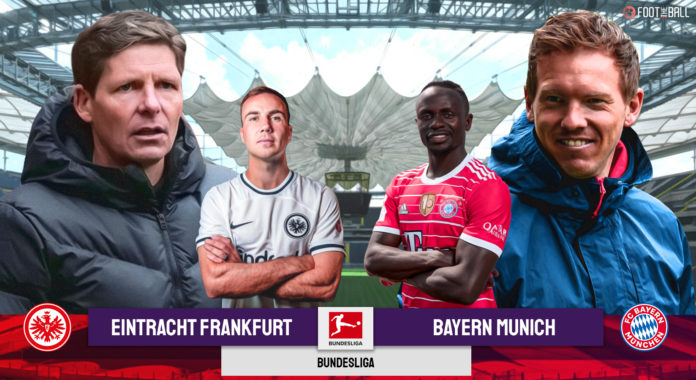 After almost two-and-a-half months of absence, the major football leagues are now coming back. In Germany, the Bundesliga starts with Europa League champions Eintracht Frankfurt taking on Bundesliga champions Bayern Munich. The Bavarians were on a roll, winning their 10th consecutive title in May. However, after that, much has gone about at Allianz Arena. The most highlighted has been the departure of star striker Robert Lewandowski to Barcelona. In addition, the German champions have bolstered their squads on many fronts.

Meanwhile, the hosts are looking to have a more consistent season. Oliver Glasner’s men won the Europa League but only managed an 11th-placed finish. And the team has managed to keep hold of their best players while adding impressive names such as Jens Petter Hauge and a resurgent Mario Gotze.

While Bayern Munich stormed their way to a Bundesliga title, they were knocked out by Villareal in the Champions League. But the top echelons at the club have kept their faith in head coach Julian Nagelsmann, one of the best young managers in the world.

Bayern have added several talented players to the squad, but the loss of Robert Lewandowski will be felt. In addition, the circumstances of his departure and the bad blood that has followed have also caused immense speculations in the media.

However, with Mane’s arrival, they have an able replacement. The Senegalese will also help the team play a more fluid attack with players interchanging positions to cause maximum damage. The addition of Mazraoui will be off immense boost as Benjamin Pavard has struggled to make the spot his own. Mathys Tel is also an able number two striker.

For Frankfurt, it is an essential season with Champions League football coming to Deutsche Bank Park. Adding Gotze and Hauge will help a team that struggled massively to score goals last season in the Bundesliga.

Bayern Munich have already won the DFL Supercup, defeating RB Leipzig 5-3. The Bavarians haven’t played much in pre-season, so it is hard to judge how well they will gel by adding the new signings. Against Leipzig, the team played a four-man defence. Will Nagelsmann switch to a three-man defence to accommodate de Ligt’s stick with his formation? Having three world-class defenders playing would free up the fullbacks to be more involved in the attack.

Q: When does the #Bundesliga season start? 🤔
A: In two more days! ✌️ pic.twitter.com/UzOQh8Q5rA

Frankfurt, meanwhile, played in a three-man defence as they won their DFB Pokal first-round match against FC Magdeburg. However, the team has a good attack with Gotze and Jesper Lindstrøm playing behind HSB Maury. As a result, the team conceded only one goal and remained undefeated in the pre-season.

For Bayern, so many players can be game changers in all departments. Among the new signings, it is Sadio Mane, who is immediately the best player in the team. The Senegalese has the experience of winning multiple silverware. He is also a ruthless goal scorer who can best negate the damage of Lewandowski’s departure.

Joshua Kimmich is another player who is Bayern’s midfield anchor. The German is the key if the team wants to dominate in the midfield. In addition, Sane, Serge Gnabry, and Kingsley Coman are essential cogs in the attack.

Mané discusses his childhood, his values and his role at #FCBayern 👇

For Frankfurt, it is Gotze who will be expected to take on the creative burden of the team. The German has recreated himself as an impressive player at PSV. He now returns to the league that made him one of the best players in the world.

Judging a team’s performance based on a handful of matches before the season is tough. However, despite adding some good players to the team, the Europa League champions have a significant challenge against the domestic champions. And Bayern, despite the loss of Lewandowski, remains the best team in Germany and could prove to be too much for them. However, the match against Bayern will be a perfect match prep for Frankfurt for their next game against Real Madrid in the UEFA Super Cup final.