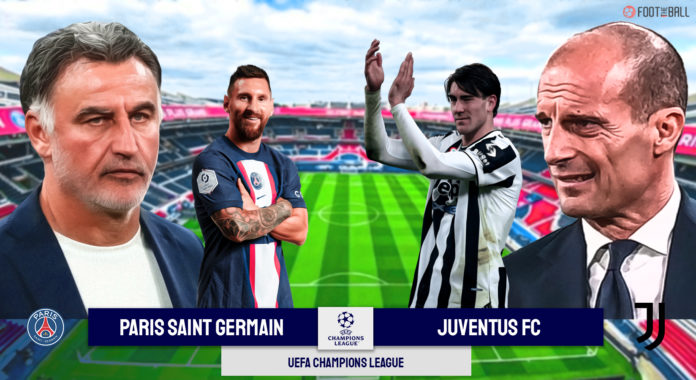 The 2022/23 UEFA Champions League finally kicks off, and with that, elite teams lock horns on one of the biggest stages. The first round of Europe’s premier competition couldn’t have gotten any better with the French Champions taking on former Italian champions, in what can be said is the pick of the round. PSG host Juventus at Parc des Princes and many of football’s greatest stars will be on show.

PSG and Juventus are heavy favourites in Group H, where they’ve been paired up with Maccabi Haifa and Benfica. Benfica might prove to be a potent dark horse, but Juventus and PSG have enough to see off the threat the Portuguese side possesses. The first match of any group is always crucial and can be used as a springboard for the rest of the competition. Both the clubs will want to get off to a good start but only one can.

PSG’s new manager Christophe Galtier has worked his magic so far on the French Champions, getting them off to a flyer in the 2022/23 Ligue 1 season. Both teams have remained unbeaten in their respective leagues so far. PSG are leading the pack in Ligue 1 as expected with 24 Goals in 6 matches while Juventus are placed 5th in Serie A with 3 draws out of 5.

Things aren’t going too well for Juventus right now. They’ve played five matches and won just two of them which explains why they sit 5th spot at the moment. On the bright side, even though they’re going through a defensive rebuild, the Old Lady have conceded just two goals in four matches.

This would be the 10th meeting between both sides, while Juventus have lost just 1 game against Parisians so far.

Since joining PSG this summer, Christophe Galtier made the first significant change by switching to a three-at-the-back formation. In addition to allowing them to use their three main centre-backs simultaneously, it also optimizes the ball-playing abilities of Sergio Ramos and Presnel Kimpembe. Marquinhos provides cover, allowing the two to support their wings in possession and create numerical superiority. Achraf Hakimi, Marco Verratti, Vitinha, and Nuno Mendes form a line of four in front of them.

With no major injury concerns for the French capital outfit, Juventus could be in for a long night in France.

As for the Old Lady, Mattia Perin will continue in goal in the absence of Wojciech Szczesny. The Poland international suffered a sprained ankle recently and will be out for a couple of weeks more. Other than that Juventus and Allegri are still dealing with long-term injuries to their star players Federico Chiesa and Paul Pogba who returned on a free transfer this summer. Adrien Rabiot is also a doubt after suffering a muscle pull in a recent training session.

Even though Manchester City have Erling Haaland, Barcelona have Robert Lewandowski, and Real Madrid have Karim Benzema, PSG are still the most star-packed team on the planet. They’re finally playing up to their potential too. But, they’re still missing Champions League silverware. Mbappe in particular is yet to win the prestigious trophy and will be determined to win it this year, after snubbing Real Madrid for signing a contract extension with PSG.

The front three of Messi, Mbappe and Neymar have been in red hot form with very few teams being able to contain the trio so far. If MNM fire on all cylinders, Juventus won’t be able to do much in terms of being competitive in the match. The trio has scored 70% of the goals for the PSG in the last six games. Messi and Neymar Combined has 13 Assists in the last six games.

Dusan Vlahovic is enjoying his football at the moment. Vlahovic, Di Maria, and Milik have scored all the goals for Juventus this season. If Juventus have any chance of coming out of this game with something, they will need their big Serb to be on top form. Vlahovic has started the season well with 4 goals already to his name in just 4 appearances. This will give Juventus manager much needed confidence knowing that he has got a striker who he can trust to finish even half-chances, given the quality of the opponent.

PSG vs Juventus is expected to be a riveting contest as the Champions of France takes on the Champions of Italy. Both sides have got some magnificent players in their ranks. PSG have got arguably the best front three in Europe right now. Messi, Mbappe and Neymar have the potential to change the match in minutes.

PSG are strong favourites going into this match. The French champions and Galtier have the quality and depth and they’re going to be thirsty for all three points here. FootTheBall predicts PSG 3-1 Juventus.