Sasa In, Erling Out? 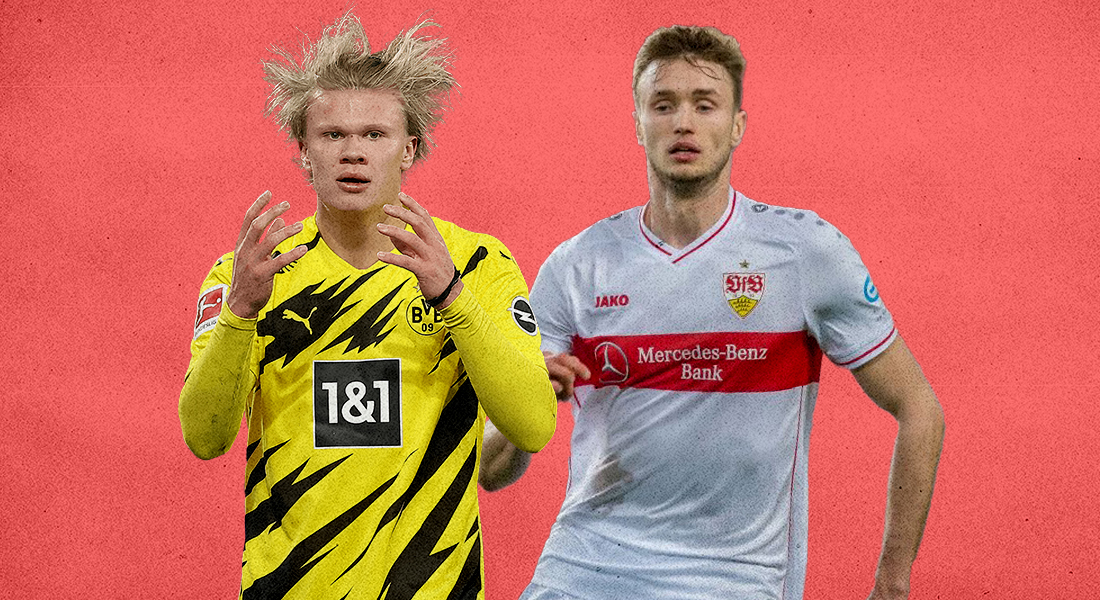 Borussia Dortmund secured an important 3-2 win over Stuttgart at the weekend, coming from behind twice to get the three points. Despite the victory, the Black and Yellow remain seven points adrift of the fourth and final Champions League qualification spot. Failure to qualify for the premier European competition will certainly mean saying goodbye to their young stars. There is perhaps no player in world football who is as in demand as Dortmund’s hitman Erling Haaland. The Norwegian may not stay even if Dortmund secure Champions League football and plans to replace him are already being put in place. In comes Sasa Kalajdzic!

WHO IS SASA KALAJDZIC?

Among the frontrunners to replace Haaland is Stuttgart striker Sasa Kalajdzic, who scored against Dortmund at the weekend. The 23-year-old made his Austria debut in October last year and scored his first goals for the national side against Scotland last month.

The youngster has scored 14 goals in 27 matches in the Bundesliga season and has attracted interest from all over Europe. West Ham, Crystal Palace and Leeds from England, Roma from Italy, RB Salzburg from Austria, and Bundesliga challengers RB Leipzig are all looking at Kalajdzic as a potential summer signing.

At 6ft. 7 inches, Kalajdzic is an intimidating presence in any lineup. He has drawn obvious comparisons with former English striker Peter Crouch. Their playing style is similar but the Austrian is perhaps technically better than Crouch.

According to BILD, RB Leipzig want to sign EVEN MORE strikers next season. The current shortlist looks like this:

The club current have 4/5 strikers in the squad + Brian Brobbey.

Kalajdzic has also been compared to former Bayern Munich and Germany striker Mario Gomez. If he goes on to win half as much as Gomez did, he would have had a good career. Zlatan Ibrahimovic has also been used to describe Kalajdzic, although the Swede will probably not be too happy about being compared to anyone.

The striker has a lot more to his game than just being an aerial threat. He is technically proficient and able to link play well with his teammates. He is comfortable dropping in between the lines and laying off passes to runners from midfield.

Kalajdzic is deceptively quick. His runs in behind and down the channels can trouble any defence and his strength and hold up play is exceptional. He has time on his side and will certainly add more to his game in coming seasons.

HOW DOES HE FIT IN AT DORTMUND?

The Austrian is stylistically similar to Haaland but not a carbon copy. Nevertheless, his performances so far bode well for a transfer to Dortmund. His ability to link well with runners is useful for a Dortmund side filled with pacy, attacking wingers like Thorgan Hazard, Marco Reus, Gio Reyna, Ansgar Knauff, Julian Brandt and Jadon Sancho, if he stays.

Dortmund, for all their player sales, do not have the financial power that is expected from a club of their size. Kalajdzic should fit well inside their budget despite interest from other clubs. However, a big payday for Haaland and a need to replace him could be exploited to inflate the transfer fee, like Dortmund did with Barcelona for Ousmane Dembele.

In an ideal world, Dortmund keep Haaland and Sancho to challenge Bayern and Leipzig for the Bundesliga next season. However, Mino Raiola’s spotlight grabbing tendencies and Haaland’s expected demand to play at the highest level is unlikely to allow that. Sasa Kalajdzic may not have burst onto the scene like the Norwegian but is a solid replacement. Will we see him succeed in a black and yellow jersey next season?