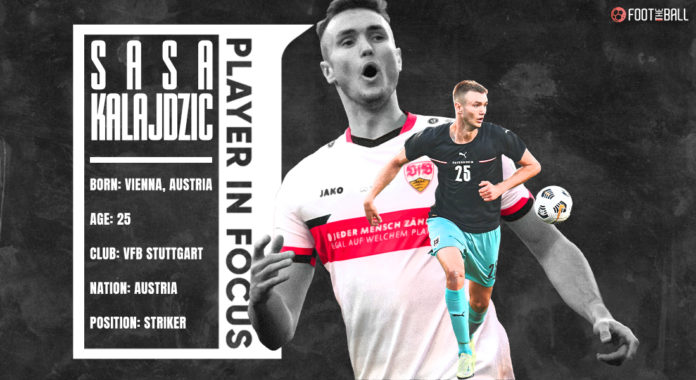 There was perhaps no player in world football who was as in demand as Erling Haaland. The Norwegian officially secured a move to Manchester City with Dortmund already replacing him with German prodigy Karim Adeyemi.

The striker merry-go-round is in full swing. Players like Alexander Isak are being targeted for record money by Newcastle, Darwin Nunez has already been signed by Liverpool. However, these names are just the cream of the crop. There is a player flying under the radar. He can be had for a fraction of the price spent on the above-mentioned names. Furthermore, he has the ability to rival these names! That player is an Austrian target man with quick feet, Sasa Kalajdzic!

Who is Sasa Kalajdzic?

Among the frontrunners to replace Haaland was Stuttgart striker Sasa Kalajdzic. The 24-year-old made his Austria debut in 2020 and scored his first goals for the national side against Scotland.

The youngster had scored 14 goals in 27 matches in the 2019-20 Bundesliga season and has attracted interest from all over Europe. The 2021-22 season, however, turned out to be a comparative dud. Sasa Kalajdzic scored just six goals in 15 league appearances as Stuttgart just about avoided relegation. Why then, is there so much fuss about Kalajdzic?

How good is Sasa Kalajdzic?

At 6ft. 7 inches, Kalajdzic is an intimidating presence in any lineup. He has drawn obvious comparisons with former English striker Peter Crouch. Their playing style is similar but the Austrian is perhaps technically better than Crouch.

According to BILD, RB Leipzig want to sign EVEN MORE strikers next season. The current shortlist looks like this:

The club current have 4/5 strikers in the squad + Brian Brobbey.

Kalajdzic has also been compared to former Bayern Munich and Germany striker Mario Gomez. If he goes on to win half as much as Gomez did, he would have had a good career. Zlatan Ibrahimovic has also been used to describe Kalajdzic, although the Swede will probably not be too happy about being compared to anyone.

The striker has a lot more to his game than just being an aerial threat. He is technically proficient and able to link play well with his teammates. He is comfortable dropping in between the lines and laying off passes to runners from midfield.

Owing to his creative work, Kalajdzic has even appeared as an attacking midfielder for Stuttgart. While Stuttgart just about avoided relegation last season, a major part of it was Kalajdzic’s unavailability for large parts of the campaign. A shoulder injury forced him to miss 4 months, and then he got COVID when he returned.

Kalajdzic is deceptively quick. His runs in behind and down the channels can trouble any defence and his strength and hold-up play is exceptional. He has time on his side and will certainly add more to his game in the coming seasons.

For now, Kalajdzic makes the most of his physical gifts while honing the rest of his skill set. He is exceptionally strong at heading due to his tall frame. Every modern forward needs to be able to press from the front in modern “Gegenpressing” systems and Kalajdzic has no qualms in doing so. Fbref stats ranked him in the 77th percentile among forwards when it comes to pressures/90.

Therefore, there is no doubt that there is a gem to be had in Sasa Kalajdzic. He is a distressed asset right now due to Stuttgart’s dismal last season. His market value will never be as low as it is now. Any team that goes in for him right now will get a bargain, especially in a transfer market full of inflated prices. That brings us to Sasa Kalajdzic transfer news.

After a slow start to the transfer window, Wolves have started to flex their muscles. Highly-rated midfielder Matheus Nunes signed for the club in a huge coup. Goncalo Guedes has also come in and with the arrival of Adama Traore back from loan, they needed a presence up front. Fabio Silva has started on a tear at his loan club, Jimenez needs support. Who better to provide it than the striker coveted all over Europe?

Sasa Kalajdzic is perfect for Bruno Lage’s system. He presses from the front, so he fits Lage’s modern attacking philosophy. He will be the favourite to get his head on all those enticing balls from Adama Traore. He runs the channels so Nunes and Co will have an attacking outlet at all times. Moreover, his hold-up play will ensure Wolves will have the option to occasionally bypass the press and play long, if they so desire.

Kalajdzic will be another transfer for Wolves in a market where they have gone for quality over quantity. Furthermore, this transfer will also be away from the famed “Jorge Mendes” connection that some fans are mildly uncomfortable with. Along with Nunes, Guedes and returning Adama, Wolves would be looking for a solid top-half finish with Kalajdzic. If he starts off with a bang, they might even challenge for Europe!