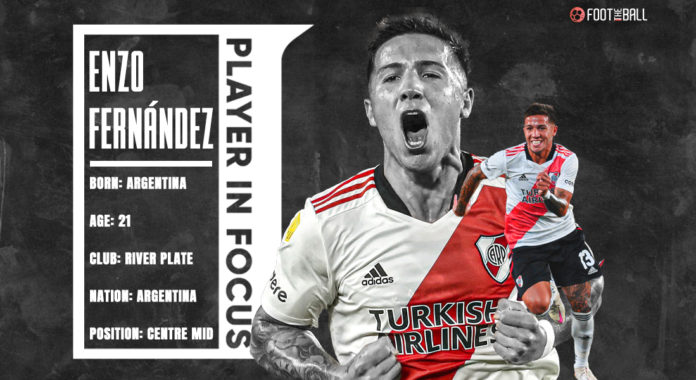 In 2000, FIFA ranked River Plate as the ninth-best club in the 20th century and the best club in Argentina. Based in Buenos Aires, River Plate has won 37 league titles, the most by any team. The club has also produced several of the best players in South America.  Enzo Francescoli, Jose Manuel Moreno, Adolfo Pedernera, Daniel Passarella, Alfred di Stefano and Hernan Crespo are just some of the players that played for the club. The club is still strong and has just sold their star striker Julian Alvarez to Manchester City. Now midfielder Enzo Fernandez is likely to follow him across the Atlantic.

Enzo Fernandez is touted to be one of the best midfielders in Argentina. The midfielder joined the River Plate youth academy and rose to the first team. Then, River Plater sent him on loan to Defensa y Justicia, a club that developed Ajax star defender Lisandro Martinez. He returned the next season and helped River Plate win the league. And this didn’t go unnoticed among the European clubs. And like innumerable stars before him from South America, Enzo Fernandez crossed the Atlantic to Portugal by joining Benfica. The Portuguese club signed the player for € 10 million. This includes and additional € 8 million as add-ons. Benfica were stacked with cash after selling Darwin Nunez to Liverpool.

Enzo Fernandez has been deployed as a number eight during his debut season at River Plate and his loan spell. This means that he is burdened with creating chances for his team. And he excels at that. As a result, the player was given a run in the team in the 2021 season. And he ended the season with three assists and two goals, good enough for a player in his debut season.

What made Fernandez stand out was his range of passing. He could make quick short passes, accurate long passes, and lobbed balls. In addition, he is a good dribbler and can move the ball forward either through his passing or dribbling.

His ground and aerial duel numbers are also excellent. It shows that he can be creative and physical to help his team out.

He is also a hard worker and beast in the middle third of the pitch. His heatmap from SofaScore shows that he was everywhere on the left hand of a midfield three. His heatmap also indicates that he was present on the right side.

However, his off-the-ball play needs further improvement even though he covers a lot of distance.

In the 2021 league season, Enzo Fernandez scored two goals and provided three assists. In addition, he scored two goals and provided one assist in the Copa Libertadores, where River Plate reached the quarterfinals. However, his best performance came in the Copa Binance 2022. Fernandez scored seven goals in the domestic cup competitions, the fourth-highest in the tournament and just one less than Alvarez. He also provided five assists to cap off a brilliant debut season.

His difference in stats is massive when comparing the league and domestic cup. In the Copa Binance, he averaged one goal per two games from a central midfielder role. And among these goals, there were brilliant long-range goals which show his shooting prowess. He also scored penalties which have increased his tally, which shows his goal-scoring skills better than it actually is. But it shows his talent that a club of River Plate’s calibre was trusting a 21-year-old with spot kicks.

His dribble success rate was 72 per cent, while his duels winning rate was well over 50 per cent or more (aerial and ground.

His league stats show a more vivid picture. In the league, his shots per game dropped from 2.8 in the cup to 2.5. Furthermore, he was more involved defensively in the league than in the cup. His interceptions per 90 minutes rose from 0.7 to 1.0, as did his possession won stats from 0.7 to 1.0.

Enzo Fernandez is a great talent but is still a work in progress. However, he has all the attributes required from a creative number 8. And he has shown that, given the opportunity, he can play at the highest level in Argentina.

An important thing to note is that River Plate are a side that emphasises pressuring opponents to win the ball back. Marcelo Gallardo who is one of the best young managers currently prefers a system somewhat similar to Manchester City and Liverpool’s Gegenpressing.  This is the reason his heatmap is so intense in the middle third.

There were a few brilliant goals scored in River's 0-7 hammering of Sarmiento, but Enzo Fernández's fourth topped the lot for me.

While his pressure numbers could improve, playing in such a system would better prepare him to go to a top European club. Fernandez is also fearless on the ball and does not mind attempting hard passes.

He still needs to improve his game, but if he manages to land in a club that plays attacking football, he can turn into Argentina’s next star.

His exploits in his home country have not gone unnoticed. His name was linked with a variety of clubs. However, media reports suggest that Wolverhampton Wanderers were close to signing him. Wolves scouting chief Mathew Hobb was also expected to go to  Argentina in order to complete a deal for the playmaker.  However, in the end Benfica who got the midfielder.

The move makes the most sense for the player. Benfica have a proven track record of developing players into superstars. They have just sold Darwin Nunez for € 100 million and thus have the money to reinvest in the squad.

Despite Nunez’s brilliance, Benfica had a horrendous season. The team finished 17 points behind champions Porto in the league. And the club have been further weakened by the sale of their best player.

According to @askomartin, #Wolves are reportedly looking to pay the release clause for River Plate's Enzo Fernandez to sign him ASAP.

It has been said previously that the player is in two minds about joining this summer due to being midway through River Plate's campaign.#WWFC pic.twitter.com/3ggcabSv3r

Benfica were also the weakest team defensively when compared to Porto and Sporting CP. And Enzo Fernandez could help them get their act together in defence. And they have paid a meagre sum for a player that in one or two seasons is likely to fo for many times on the transfer market.

He was named after three-time Copa America winner Enzo Francescoli. The player also won the league title with River Plate. Enzo Fernandez has emulated his hero by winning the league, and now he just needs to have a fantastic career like him.