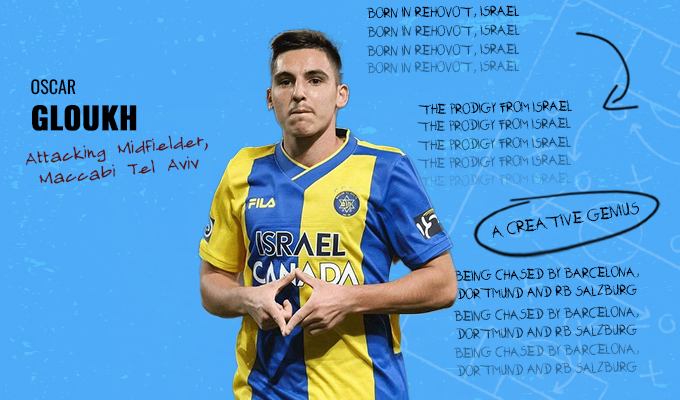 With the winter transfer window in full swing, clubs are scampering around to sign the best player on the market. And just like every other season, there are some new talented players from low-rung leagues whose performances have caught the eyes of the big leagues. One such player is Oscar Gloukh, the talented midfielder playing his trade in the Israeli side, Maccabi Tel Aviv.

At just 18 years, Gloukh is the best player to come out of Israel. His impressive displays have been noticed by several in the domestic league and the 2022 UEFA European Under-19 Championship.

These displays was rewarded with multiple European clubs looking to add the teenager to their ranks. However, in the end the race was won by Austrian club Red Bull Salzburg. Gloukh might be the most prominent star since Yossi Benayoun for Israeli football.

So, who is Oscar Gloukh, and how has he been in his short career?

Oscar Gloukh was born on April 1, 2004, in Rehovot, 20 kilometres from Tel Aviv, Israel. His father was a Jew from Russia who emigrated to Israel like thousands of other people in Aliyah (migrate to Israel). Oscar Gloukh started his career at Maccabi Sha’arayim F.C. but only stayed for one year before joining Maccabi Tel Aviv’s youth ranks.

He has since been at the club for 12 years, going from strength to strength as he made rapid progress through various age groups. Finally, in the 2020-21 season, he was given a crack at the first team as he played in the Championship Round of the Ligat ha’Al.

Playing in eight matches, Gloukh scored three goals, with one coming in a winning cause and the other earning his team a draw. This prompted newly appointed manager Vladimir Ivic to promote him to the senior squad.

And in just 15 matches, he has proved that he is too good for the Israeli league, even at such a young age. His impressive displays are a key reason they are currently in second place in the league. And if he manages to keep up this level of performance, then Tel Aviv could also win their 24th league title.

Barcelona tried to sign Gloukh as Benfica, Udinese and Borussia Dortmund but no way. pic.twitter.com/vILccQk8nR

In his first season for the club, Gloukh has surpassed all expectations scoring four goals and providing eight assists in just 15 matches. This gives him a 0.8-goal involvement per match, an impressive stat for a player his age. In fact, his start to the league was even more impressive as he scored three goals and provided four assists in his first three matches.

At the same time, he has also been a revelation for Israel’s youth and the senior team as well. He scored four goals in his 16 matches for the under-19 national team. He would make his under-21 debut for his country under Alon Hazan, now the senior team head coach.

And it was Hazan who gave him a crack at the senior team, where Gloukh scored his debut goals in a 3-2 loss against Cyprus. After that, however, he reserved his best displays for the UEFA under-19 European Championship.

Gloukh scored three goals, including one in the final against England, as Israel finished as runners-up, their best performance at the tournament.

Oscar Gloukh primarily plays the number 10 role, famously known as the ‘Trequartista‘. Playing behind the striker, Gloukh uses his creative brilliance to its fullest to create chances for his teammates.

This is the main reason why his assist numbers are so high in the league. However, as FootTheBall highlighted in its article on Eintracht Frankfurt’s golden boy Jesper Lindstrom, the number 10 position is seldom used in modern football.

This means either Gloukh becomes the most advanced player in a three-person midfield or becomes a false nine centre-forward. And Gloukh does have the qualities to become the former One of his significant qualities is his impressive passing, which makes him such a threat. When teams do try to contain him by not allowing him to venture deep into their areas, Gloukh became a false number six for some time dictating play from the middle of the field.

He generally relies on his speed in the attacking areas to get past his man and provide the final ball for his teammates. However, he tends to do too much on his own, which gives the opposition enough time to snuff out the attack.

And despite his pace, Gloukh needs to put in the hard yards, such as tracking back or making runs behind the defence. However, he is expected to add these skills when playing for a big team where he might not be afforded this luxury.

What makes Oscar Gloukh special is his impressive ability to spot gaps in the opposition’s defence. There have been other playmakers, but only some possess his excellent vision and equally brilliant passing at such a young age. And if he can keep up his development, he could become one of the best players to come out of Israel.

On top of that, he also has the experience of playing against the best players his age at the European Championship, showing he has the talent to cut it out on the biggest stage. Gloukh also has great confidence in his skills which gives him the courage to do the brilliant skills that make him a sought-after player.

Oscar Gloukh is already being chased by the top clubs, which speaks volumes about his potential. However, with only half a season under his belt, Gloukh has already shown that he is here to stay at the top level.

This is why Barcelona, Red Bull Salzburg, Tottenham Hotspur, AS Monaco and Borussia Dortmund were all looking to add him to their ranks. Of these, Barcelona and Salzburg have been the most active and in the end the latter won the race.

According to recent reports, Gloukh and his family preferred Salzburg, given their excellent track record of developing youngsters into world-class stars. And nwo Salzburg have another serious baller in their ranks.